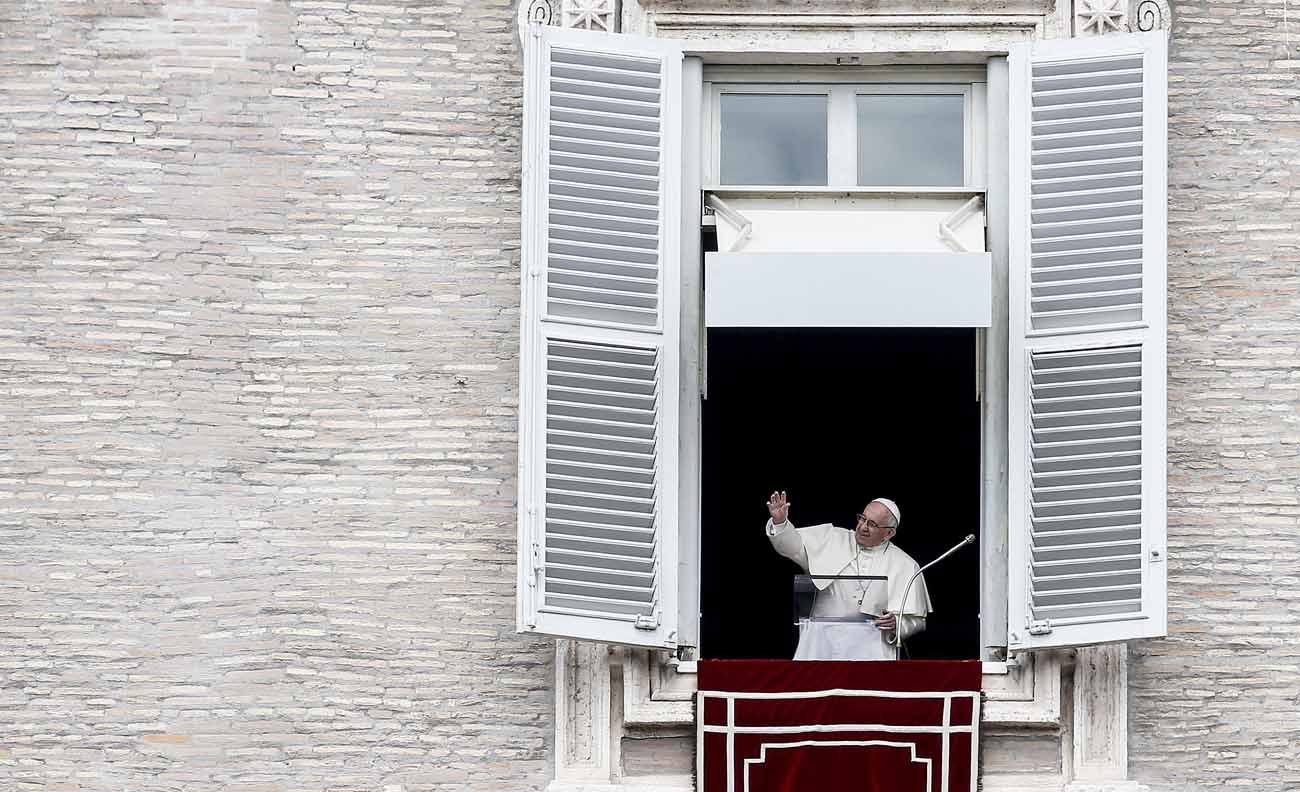 Pope Francis waves as he leads the Angelus Sept. 9 from the window of his studio overlooking St. Peter's Square at the Vatican. (CNS photo/Favio Frustaci, EPA)

VATICAN CITY (CNS) — Fear often causes people to remain silent in the face of other’s suffering and marginalize the sick and those most in need, Pope Francis said.

Instead of being viewed as “an occasion to manifest care and solidarity,” the sick and the suffering are often seen as problem, the pope said Sept. 9 during his Sunday Angelus address.

After praying the Angelus prayer with an estimated 15,000 pilgrims in St. Peter’s Square, the pope led them in applauding the beatification of Blessed Alphonse Marie Eppinger, a 19th-century nun who founded the Sisters of the Divine Redeemer.

“Let us give thanks to God for this courageous and wise woman who, while suffering in silence and prayer, gave witness to God’s love, especially to those who were sick in body and spirit,” the pope said.

In his main address, Pope Francis reflected on the Sunday Gospel reading from St. Mark, which recalled Jesus’ healing of a deaf man who had a speech impediment.

According to the Gospel, Jesus healed the man as he placed his “finger into the man’s ears and, spitting, touched his tongue” as he looked up to heaven and said, “Ephphatha” (“Be opened”).

Pope Francis explained that the Gospel story emphasizes a “two-fold healing” that not only involves restoring the “physical health of the body” but also the “healing of fear” that “drives us to marginalize the sick, to marginalize the suffering, the disabled.”

“There are many ways of marginalizing, also with pseudo-compassion or by removing the problem; one remains deaf and dumb in the face of the suffering of people marked by illness, anguish and difficulties,” he said.

Jesus’ command that the man’s ears and tongue “be opened” is also a calling for Christians to be open to “our suffering brothers and sisters in need of help” and to reject selfishness and the closure of one’s heart, the pope said.

The heart, he added, is what Jesus came to “liberate, to make us capable of living fully our relationship with God and with others.”

Jesus became human so that human beings, “rendered interiorly deaf and dumb by sin, can listen to the voice of God, the voice of love that speaks to the heart and thus learn to speak, in turn, the language of love, translating it into gestures of generosity and self-giving,” Pope Francis said.

NEXT: At eucharistic congress, English cardinal prays for pardon for bishops