At eucharistic congress, English cardinal prays for pardon for bishops 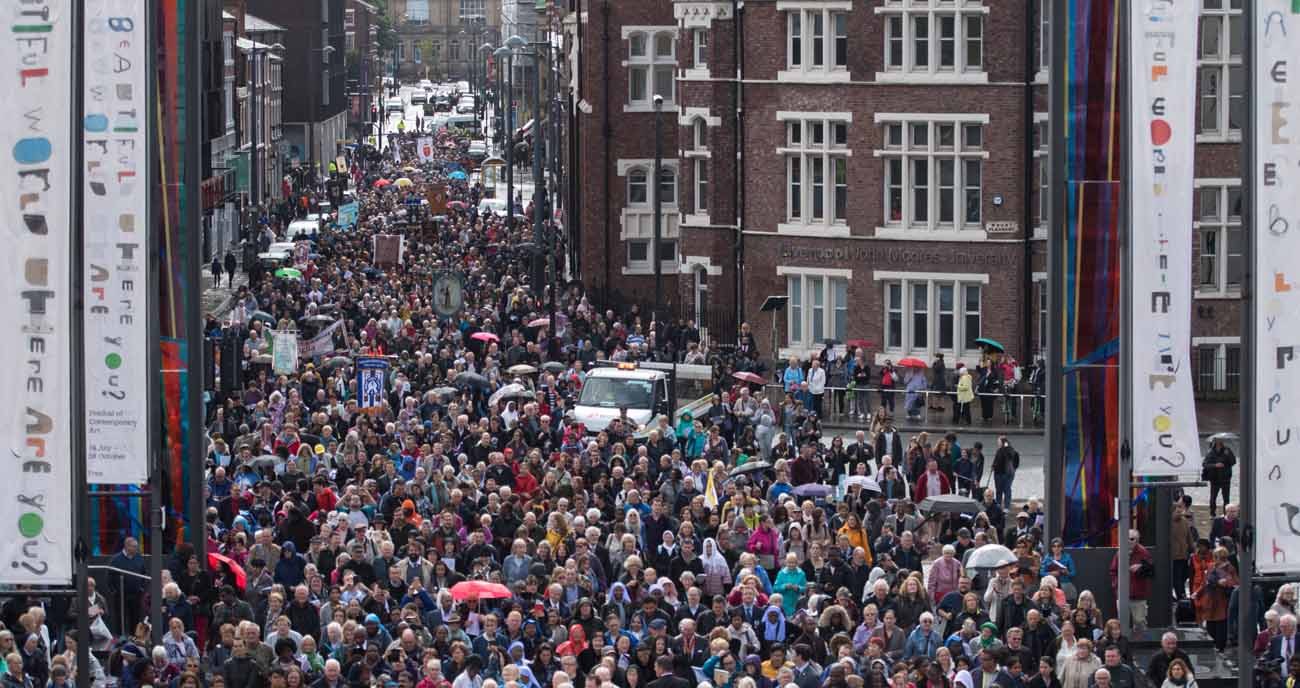 LIVERPOOL, England (CNS) — An English cardinal prayed for the forgiveness of bishops who had brought “the face of evil” into the Catholic Church by allowing or carrying out acts of abuse.

Without naming the bishops, Cardinal Vincent Nichols of Westminster said such leaders had sowed “hurt, damage and mistrust” among the faithful.

He made his remarks before a crowd of 6,000 people gathered at Liverpool’s Echo Arena during the National Eucharistic Congress and Pilgrimage.

During Sept. 8 reflections before the Blessed Sacrament, he told his audience that together they came to Christ “knowing our failings, sensing the anger in many hearts, knowing the face of evil.”

“I feel this with great keenness and sadness, for the failings of my fellow bishops are there for all to see,” said Cardinal Nichols, president of the Bishops’ Conference of England and Wales.

“As bishops, we are bound to each other,” he continued. “I come as a beggar, seeking forgiveness, laying the load of the hurt, damage and mistrust we have caused at the foot of the cross.”

Cardinal Nichols prayed that God would renew the church “so that we may bring joy, not grief, trust not betrayal, love not anger in the hearts of all people, especially your poor and little ones.”

Speaking of the Sept. 9 procession of the Blessed Sacrament through the streets of Liverpool, Cardinal Nichols said there would be “not one iota of triumphalism or pride in our steps.”

“Ours is a penitential procession, for we are focused on Jesus, whom we have crucified. Yet we walk with a humble joy for he takes our failure, cruelty and deceit and overcomes it all with his love and mercy,” Cardinal Nichols said.

The cardinal’s comments came amid a scandal in the U.S. concerning allegations of abuse of seminarians by Archbishop Theodore E. McCarrick and the alleged failure of church officials to remove him. In August, the hierarchy in England also faced criticism from the Independent Inquiry into Child Sexual Abuse for the church’s failure to ensure that its safeguarding rules were observed in two Benedictine-run schools, where students as young as 7 endured “appalling sexual abuse” at the hands of predatory monks and teachers.

Thanking the delegates for their “exuberance,” he said: “It means a lot for the church which, as you know, is going through a painful time and, during these periods, I think it is so important that we return to the fundamentals. That means, above all, Christ in the Eucharist.”

Bishop Barron also said the missionary work of the church must continue because the “rising tide of secularism” was driving increasing numbers of people away from religion.

“I see it every day, especially among the young,” he said in a speech Sept. 8. “People are losing the sense of God, the sense of the transcendent. They need us.”

“We don’t have to fly over oceans to go to mission territory today,” Bishop Barron added. “You walk outside the door of any church in the Western world and you are in mission country.”

Closing the national congress at the Cathedral of Christ the King, Liverpool Archbishop Malcolm McMahon said Catholics must continue to preach the Gospel in spite of such scandals.

“Maybe our words and our actions won’t carry the same authority as before, and it is going to be hard to proclaim the Gospel, but the Gospel still has to be proclaimed, and there is no one else to do it except us poor sinners,” he said. “So, let us continue to do that by our actions as well as our words so that others may see Jesus in us — the suffering Jesus, the dying Jesus, the risen Jesus.”

The national eucharistic congress was the first in England since 1908, when Catholics were forbidden to carry the Blessed Sacrament publicly through London in case their actions inflamed hostile Protestant sentiments.

In Liverpool, however, Anglican, Methodist and other religious leaders joined the Catholic bishops in their procession.

Pope Francis sent a message to the congress, read Sept. 8 by U.S. Archbishop Edward J. Adams, papal nuncio to Great Britain, in which he encouraged the Catholics of England and Wales to be as steadfast as their martyrs.

“The history of the church in your lands is marked in no small part by the central place that countless numbers of saints have given to the sacrifice of the Mass,” said the pope in a letter read out at Echo Arena.

“These holy men and women, sometimes even to the shedding of their blood, have given eloquent and steadfast witness to Christ in devotion to the blessed Eucharist,” he said. “They are rightly to be venerated, and the Church in England and Wales must never lose sight of their precious memory.”

“We must continue to bear witness to the same Lord and the same precious gift of the Eucharist today for past glories are always a beginning and not an end. The Lord is calling you still to go out and bear witness,” he said.

NEXT: Council of Cardinals expresses ‘full solidarity’ with pope