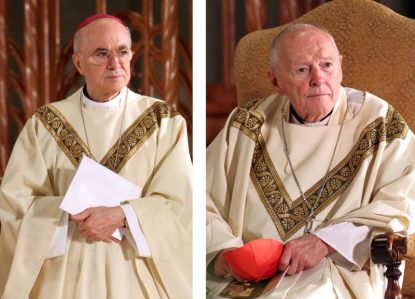 Archbishop Carlo Maria Vigano, then nuncio to the United States, and then-Cardinal Theodore E. McCarrick of Washington, are seen in a combination photo during the beatification Mass of Blessed Miriam Teresa Demjanovich at the Cathedral Basilica of the Sacred Heart in Newark, N.J., Oct. 4, 2014. (CNS photo/Gregory A. Shemitz)

ROME (CNS) — Archbishop Carlo Maria Vigano, the former nuncio to the United States who called on Pope Francis to resign for allegedly lifting sanctions placed on Archbishop Theodore E. McCarrick, now says those “sanctions” were “private” and neither he nor now-retired Pope Benedict XVI ever was able to enforce them.

While Archbishop Vigano went into hiding after publishing his “testimony” Aug. 25 about Archbishop McCarrick — and about Pope Francis and a host of other current and former Vatican officials — the former nuncio has continued to speak to the writers who originally helped him publish the document.

Pope Francis has not said anything since Aug. 26 when he told reporters traveling with him to study the document and do their own research. Even if the sanctions were private, Archbishop Vigano claimed Pope Francis was aware of them.

The measures imposed by Pope Benedict were in response to reports of Archbishop McCarrick’s sexual misconduct with and sexual harassment of seminarians. After allegations that Archbishop McCarrick had sexually abused a minor were deemed credible in June, Pope Francis publicly imposed sanctions on him and accepted his resignation from the College of Cardinals.

Archbishop Vigano also had said Cardinal Donald W. Wuerl of Washington, Archbishop McCarrick’s successor, had long been aware of Pope Benedict’s sanctions, but the Archdiocese of Washington said Aug. 27, “Cardinal Wuerl has categorically denied that any of this information was communicated to him.”

The former nuncio said that in November 2011 he was sent as nuncio to the United States with specific information about the sanctions from Cardinal Marc Ouellet, prefect of the Congregation for Bishops. The cardinal has not responded to a Catholic News Service request for an interview.

Archbishop Vigano appeared publicly with then-Cardinal McCarrick at a May 2012 gala in New York honoring the cardinal. LifeSiteNews said the archbishop explained that “he was just beginning his role as the pope’s representative at the time” and that “the nuncio is not somebody who may enforce restrictions directly, especially with a cardinal, who is considered the superior.”

The other English-language outlet that originally published Archbishop Vigano’s text was the National Catholic Register, a newspaper owned by EWTN. The Register had reported that it “independently confirmed” that Pope Benedict “remembers instructing Cardinal (Tarcisio) Bertone to impose measures but cannot recall their exact nature.”

In a Register blog post Aug. 31, the author of the original story, Edward Pentin, provided more information from his source, saying the retired pope is now “unable to remember very well” how the supposed sanctions were handled. “As far as (Pope) Benedict could recall, the source said the instruction was essentially that (then-Cardinal) McCarrick should keep a ‘low profile.’ There was ‘no formal decree, just a private request,'” Pentin wrote.