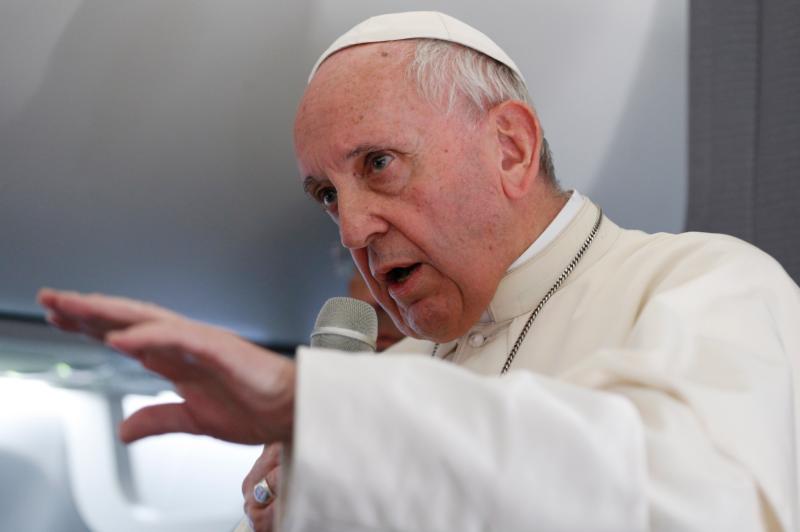 ABOARD THE PAPAL FLIGHT TO ROME (CNS) — The Catholic Church has grown in its understanding of the horror of clerical sexual abuse and of the “corruption” of covering it up, Pope Francis said.

Returning to Rome from a trip Sept. 22-25 to the Baltic nations, Pope Francis was asked about his remarks to young people in Tallinn, Estonia, when he said young people are scandalized when they see the church fail to condemn abuse clearly.

Whatever the statistics say about rates of clerical abuse, the pope said, “if there is even just one priest who abuses a boy or a girl, it is monstrous, because that man was chosen by God to lead that child to heaven.”

The fact that child abuse occurs in many environments does not in any way lessen the scandal, he said.

But it is not true that the church has done nothing “to clean up,” Pope Francis told reporters. If one looks at the Pennsylvania grand jury report released in August or other similar studies, he said, it is clear that the majority of cases occurred decades ago “because the church realized that it had to battle it in a different way.”

“In olden times these things were covered up — but they were covered up also in families, when an uncle abused his niece, or a father raped his child; it was covered up because it was a very great shame,” Pope Francis said. “That was how people thought in the last century.”

To understand what happened in the past, he said, one must remember how abuse was handled then.

“The past should be interpreted using the hermeneutic of the age,” Pope Francis said. People’s “moral consciousness” develops over time, he said, pointing to the death penalty as an example.

But, he said, “look at the example of Pennsylvania. Look at the proportions and you will see that when the church began to understand, it did all it could.”

In fact, the pope said, he has encouraged bishops to report cases to the Congregation for the Doctrine of the Faith, and he “never, never” granted amnesty to a priest found guilty of abuse.

Pope Francis did not mention by name Archbishop Carlo Maria Vigano, the former nuncio to the United States, who claimed that Pope Francis knew of and ignored the sexual misconduct of former Cardinal Theodore E. McCarrick. And the journalists’ question about Archbishop Vigano was never asked because the pope insisted that most of the questions be related directly to his trip to Lithuania, Latvia and Estonia.

But the pope did say that “when there was that famous statement from an ex-nuncio, bishops from the whole world wrote to tell me they were close to me and praying for me.”

One of the letters, he said, came from China and was signed jointly by a bishop from the government-controlled Chinese Catholic Patriotic Association and a bishop from “the, let’s say, traditional Catholic Church.”

Reporters also asked the pope about the Vatican-China agreement for the nomination of bishops, which was announced Sept. 22 while the pope was in Lithuania, and about the suffering of Chinese Catholics who had risked their lives to remain faithful to the pope and not accept the communist government’s control over the church.

Some Catholics in China “will suffer” and feel betrayed, he said, “but they have great faith” and in the end will trust the pope.

Pope Francis praised the team of Vatican negotiators who worked “two steps forward, one step back” for 10 years, but he insisted he bore all responsibility for the agreement and, especially, for regularizing the situation of seven bishops who had been ordained without Vatican approval.

With every “peace treaty” and every negotiation, he said, “both sides lose something” and for the Vatican that was complete control over the nomination of bishops.

However, he said, people should remember that for centuries the kings of Spain and Portugal nominated the bishops of Latin America, and the Austro-Hungarian emperors did the same in their territory.

The new Vatican-Sino agreement, Pope Francis said, sets up “a dialogue on eventual candidates” for dioceses in China, “but the naming is the pope’s — let that be clear.”

PREVIOUS: As part of message to Catholics in China, pope offers prayer to Mary