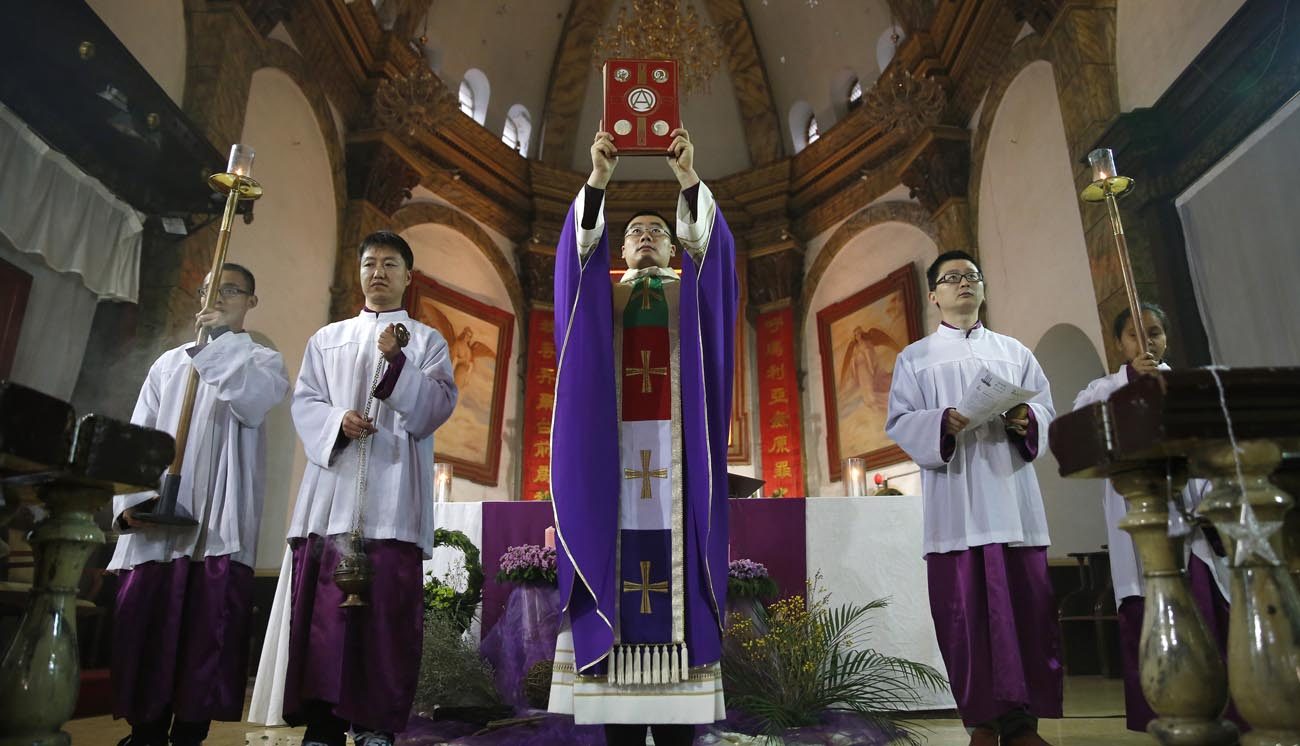 A Catholic priest celebrates Sunday Mass in Beijing in this Dec. 4, 2016, file photo. In a special message addressed "to the Catholics of China and to the universal church," released by the Vatican Sept. 26, Pope Francis said he hoped a recent Sin-Vatican agreement would help "restore full communion among all Chinese Catholics." (CNS photo/How Hwee Young, EPA)

VATICAN CITY (CNS) — The recent Vatican-China agreement on the nomination of bishops seeks the true good of the church, the promotion of preaching the Gospel in China and the re-establishment of the church’s full and visible unity, Pope Francis said in a message to Catholics in China and worldwide.

With the help and prayers of all Catholics, the pope said he hopes the provisional agreement announced Sept. 22 will begin an “unprecedented process that we hope will help to heal the wounds of the past, restore full communion among all Chinese Catholics, and lead to a phase of greater fraternal cooperation in order to renew our commitment to the mission of proclaiming the Gospel.”

“The church exists for the sake of bearing witness to Jesus Christ and to the forgiving and saving love of the Father,” not for political or personal aims, he wrote.

The pope’s comments came in a special papal message addressed “to the Catholics of China and to the universal church,” released by the Vatican Sept. 26.

Acknowledging the “conflicting reports” circulating about the future of Catholic communities in China as well as the wide variety of reactions, such as “confusion,” doubt or hope, the pope used the message to assure the faithful in China of his daily prayers and sincere admiration “for the gift of your fidelity, your constancy amid trials and your firm trust in God’s providence, even when certain situations proved particularly adverse and difficult.”

He asked people to look “to the example of all those faithful laity and pastors who readily offered their ‘good witness’ to the Gospel, even to the sacrifice of their own lives. They showed themselves true friends of God!”

Jesuit Father Matteo Ricci, a late 16th-century missionary to China, challenged the church to trust when he said that “before entering into friendship, one must observe; after becoming friends, one must trust,” the pope wrote.

The provisional agreement, he said, was pursued according to that same spirit of believing that an encounter can be authentic and fruitful only when it comes through dialogue, “which involves coming to know one another, to respect one another and to ‘walk together’ for the sake of building a common future of sublime harmony.”

The process of dialogue between the Holy See and Chinese authorities — begun by St. John Paul II and continued by Pope Benedict XVI — has been driven by the sole desire “to attain the church’s specific spiritual and pastoral aims, namely, to support and advance the preaching of the Gospel, and to reestablish and preserve the full and visible unity of the Catholic community in China,” which had been divided between communities willing to cooperate with the communist government and those that refused to do so, he said.

Reaching the provisional agreement, the pope said, involved a process that required time, good will and recognizing that less than perfect conditions should never impede the call to “go out” and embrace “the people of our time, especially those who are poor or afflicted.”

The Old Testament patriarch Abraham was obedient to God in setting out for an unknown land, the pope said. Had Abraham “demanded ideal social and political conditions before leaving his land, perhaps he would never have set out. Instead, he trusted in God and in response to God’s word he left his home and its safety. It was not historical changes that made him put his trust in God; rather, it was his pure faith that brought about a change in history.”

“As the successor of Peter, I want to confirm you in this faith” in God’s promise, the pope said, imploring the Holy Spirit to help everyone understand where God “would lead us, in order to overcome inevitable moments of bewilderment, and to find the strength to set out resolutely on the road ahead.”

The pope said dealing first with the issue of the appointment of bishops was essential for “supporting and promoting the preaching of the Gospel in China and reestablishing full and visible unity in the church.”

The existence of a clandestine or underground church like China has had “is not a normal part of the life of the church,” and as Pope Benedict XVI said in his 2007 letter to Chinese Catholics, “history shows that pastors and faithful have recourse to (going underground) only amid suffering, in the desire to maintain the integrity of their faith.”

Pope Francis said he has received “numerous concrete signs and testimonies” from Chinese Catholics of their desire “to live their faith in full communion with the universal church and with the successor of Peter.” That desire was also evident in the repentance of bishops who “damaged communion in the church as a result of weakness and errors, but also, and not infrequently, due to powerful and undue pressure from without,” he added.

After examining each situation, spending much time in reflection and prayer, and “seeking the true good of the church in China,” the pope said that, “in continuity with the direction set by my immediate predecessors, I have determined to grant reconciliation to the remaining seven ‘official’ bishops ordained without papal mandate and, having lifted every relevant canonical sanction, to readmit them to full ecclesial communion.”

However, he asked these seven bishops “to express with concrete and visible gestures their restored unity with the Apostolic See and with the churches spread throughout the world, and to remain faithful despite any difficulties.”

The pope emphasized that the provisional agreement dealt only with some aspects of the church’s life and was “capable of improvement,” but on the whole, it was meant to begin a “new chapter of the Catholic Church in China.”

For the first time, he said, “the agreement sets out stable elements of cooperation between the state authorities and the Apostolic See, in the hope of providing the Catholic community with good shepherds.”

While the Holy See will play its part, it is critical that the bishops, priests, consecrated men and women, and lay faithful in China “join in seeking good candidates capable of taking up in the church the demanding and important ministry of bishop.”

“It is not a question of appointing functionaries to deal with religious issues, but of finding authentic shepherds according to the heart of Jesus, men committed to working generously in the service of God’s people, especially the poor and the most vulnerable,” he said.

All Christians without exception, he said, “must now offer gestures of reconciliation and communion” since the faithful will be judged by God on their love.

While Chinese Catholics “must be good citizens, loving their homeland and serving their country with diligence and honesty, to the best of their ability,” he said, serving the common good “may also require of them the effort to offer a word of criticism, not out of sterile opposition, but for the sake of building a society that is more just, humane and respectful of the dignity of each person.”

He called on bishops, priests and religious to “recognize one another as followers of Christ in the service of God’s people,” to leave behind past conflicts and to work humbly for reconciliation and unity.

Calling on Catholics worldwide, the pope asked for “fervent prayer and fraternal friendship” with Catholics in China.

Addressing the leaders of the People’s Republic of China, Pope Francis renewed his invitation “to continue, with trust, courage and farsightedness, the dialogue begun some time ago. I wish to assure them that the Holy See will continue to work sincerely for the growth of genuine friendship with the Chinese people.”