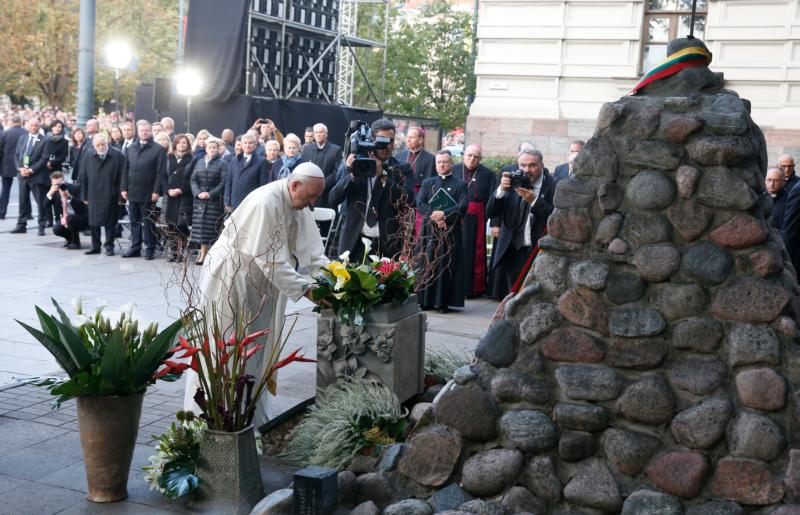 Pope Francis lays flowers at a memorial to victims outside the Museum of Occupations and Freedom Fights in Vilnius, Lithuania, Sept. 23. (CNS photo/Paul Haring)

VILNIUS, Lithuania (CNS) — Outside the former KGB headquarters in Vilnius, Pope Francis ended a day of paying homage to victims of totalitarianism and of warning Lithuanians to be attentive to any signs of anti-Semitism or hatred.

The walls of the KGB building — a former jail and execution site — echo the cry of Jesus on the cross, “My God, my God, why have you forsaken me?” the pope said.

Although thousands of people filled the square in front of the building, the mood was somber for the pope’s visit Sept. 23. And it was punctuated by long pauses for silent prayer.

He had toured the museum with 79-year-old Archbishop Sigitas Tamkevicius, whose photo is featured prominently on a wall display honoring the priests and bishops who endured imprisonment in the building’s basement.

The archbishop had been imprisoned from 1983 to 1988 for “anti-Soviet propaganda.” As a Jesuit priest, in 1972 he began publishing the Chronicle of the Catholic Church in Lithuania, an underground newsletter documenting communist repression of the church. Despite repeated questioning by the KGB, he managed to publish and distribute the chronicle for more than 10 years and, once he was arrested, others continued his work. St. John Paul II named him archbishop of Kaunas in 1996, and the archbishop retired in 2015.

The pope had gone to the museum after stopping to pray at a monument to more than 40,000 Jews in Vilnius killed by the Nazis. The prayer coincided with the national commemoration of the 75th anniversary of the liquidation of the Vilnius Ghetto.

Standing by the former KGB headquarters, Pope Francis prayed that God would “keep us alert” and strengthen the commitment of Catholics and all Lithuanians to fighting all forms of injustice and defending the dignity of all people.

“Lord,” he prayed, “grant that we may not be deaf to the plea of all those who cry out to heaven in our own day.”

Juozas Jakavonis, 93, sat in a place of honor and told reporters the pope’s visit was important for reminding people of all those who suffered and died for the freedom they now enjoy.

Dressed in an old military uniform, Jakavonis said his nom de guerre had been “Tiger.” He was part of the resistance to Soviet domination and spent three months jailed in that very building. After Lithuanian independence in 1990, he helped bring to public attention what occurred there. Records now show 1,038 people were executed in the building between 1944 and 1947.

Pope Francis had begun the day in Kaunas, a city about 60 miles West. But the memory of the victims of Nazism and communism and the obligation of today’s Christians to fight all forms of hatred dominated there as well.

His last appointment was with priests, religious women and men and seminarians, and he began with ad-libbed remarks.

“I want to share what I feel,” the pope said. “Looking at you, I see behind you many martyrs — anonymous martyrs, in the sense that we don’t even know where they were buried.”

“Do not forget. Remember. You are children of martyrs. That is your strength,” the pope told them. “They are saints.”

Earlier in day, before reciting the Angelus prayer after Mass in Kaunas’ Santakos Park, Pope Francis drew special attention to the anniversary of the destruction of the Jewish ghetto and to the evil of anti-Semitism. Before the Nazis invaded the country, at least 200,000 citizens were Jewish; fewer than 15,000 survived.

“Let us think back on those times and ask the Lord to give us the gift of discernment to detect in time any new seeds of that pernicious attitude, any whiff of it that can taint the heart of generations that did not experience those times and can sometimes be taken in by such siren songs,” Pope Francis said.

A visit to the famed Hill of Crosses near Vilnius was not on Pope Francis’ schedule, but he did point to it as a place where, especially during Soviet times, Catholics defiantly planted crosses to proclaim their faith.

He prayed that Mary would “help us all to plant our own cross, the cross of our service and commitment to the needs of others, on that hill where the poor dwell, where care and concern are needed for the outcast and for minorities. In this way, we can keep far from our lives and our cultures the possibility of destroying one another, of marginalizing, of continuing to discard whatever we find troublesome or uncomfortable.”

Earlier, celebrating Mass in the park, Pope Francis had insisted that for a Christian the mistreatment Lithuanians endured first under the Nazis and then under the communists can never justify mistreating others. Instead, the experience must make victims and survivors even more sensitive and attentive to new attempts to denigrate or dominate certain groups of people.

“The Christian life always involves experiences of the cross,” Pope Francis said in his homily. Lithuania’s older generation still bears “the scars of the period of the occupation, anguish at those who were deported, uncertainty about those who never returned, shame for those who were informers and traitors.”

Referring to the day’s Gospel reading from St. Mark in which Jesus warns his disciples of the suffering that is to come, Pope Francis said that naturally the disciples “wanted nothing to do with trials and hardships.” And, in fact, they were more interested in discussing who among them was the greatest.

“The thirst for power” is not an unusual reaction to having endured suffering, the pope said. Nor is discussing “who was better, who acted with greater integrity n the past, who has the right to more privileges than others.”

But when his disciples started speaking that way, the pope said, Jesus pointed to a child, one who was small and in need of protection.

And, the pope asked, “whom would Jesus place in our midst today?”

“Who is it who has nothing to give us, to make our effort and our sacrifices worthwhile?” Pope Francis asked. “Perhaps it is the ethnic minorities of our city. Or the jobless who have to emigrate. May be it is the elderly and the lonely, or those young people who find no meaning in life because they have lost their roots.”

Whoever “the least” may be, he said, Christians are called to help them.

NEXT: Stay close to the suffering, forgive one another, pope tells Latvians