God is patient, even with failures, pope tells young Lithuanians 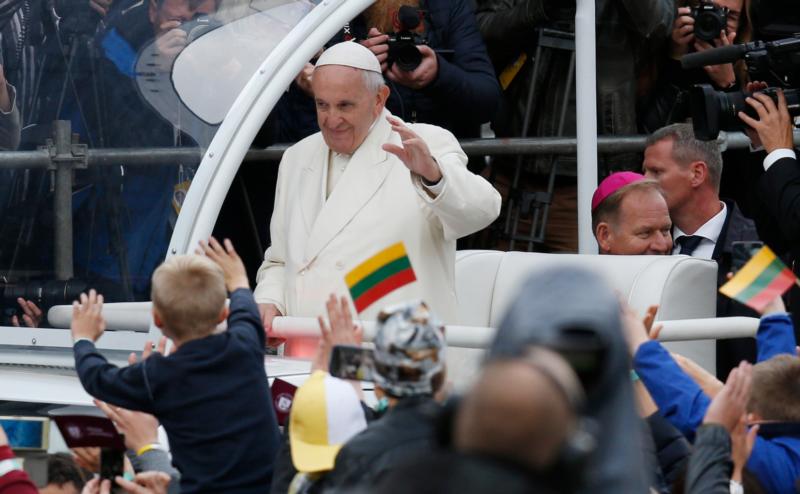 Pope Francis greets the crowd as he arrives for a meeting with young people in the square adjacent to the cathedral in Vilnius, Lithuania, Sept. 22. (CNS photo/Paul Haring)

VILNIUS, Lithuania (CNS) — Meeting young Lithuanians in Vilnius, Pope Francis said he wanted a relaxed conversation, like they were sitting in a pub drinking “a beer or a gira,” a slightly alcoholic beverage made from fermented rye bread.

Yet the stories two young adults shared with him Sept. 22 and his responses to their concerns were not casual.

Monika Midveryte spoke about growing up with an alcoholic father who beat her and eventually committed suicide. A young man, identified only as Jonas, spoke about being diagnosed with an autoimmune disease and how serious illness made him and his young wife realize just how serious their wedding vows were.

Meeting the teens and young adults outside the city’s Cathedral of Sts. Stanislaus and Ladislaus, which has been destroyed and rebuilt several times, Pope Francis urged the two and all their peers to think about how God has been close to them, too, even amid tragedy.

Almost always, he said, it is through other people that God’s grace arrives to those in need. “It doesn’t drop from the sky. It doesn’t happen by magic, there’s no magic wand.”

“Don’t let the world make you believe that it is better to do everything on your own,” the pope told the young people. “Don’t yield to the temptation of getting caught up in yourself, ending up selfish or superficial in the face of sorry, difficulty or temporary success.”

Pope Francis told the young people, many of whom dream of emigrating for more opportunities, that their lives are not “a theater piece or a video game” with a final curtain or a lurking “game over.”

The important thing, he said, is to keep praying and keep moving forward, “seeking the right way without being afraid to retrace our steps if we make a mistake. The most dangerous thing is to confuse the path with a maze that keeps us wandering in circles without ever making real progress.”

Before joining the young people, Pope Francis stopped at the “Gate of Dawn,” one of nine gates that led into the ancient city of Vilnius. The pope mingled with dozens of orphaned children and the families that have adopted or fostered them. After praying silently for several minutes before the oversized icon of Our Lady, Mother of Mercy that marks the gate, the pope gave a brief talk and then prayed a decade of the rosary with thousands of people gathered in the street.

Noting how the icon and the gate were the only parts of the city’s fortified walls to remain after an invasion in 1799, Pope Francis said Mary teaches Christians that “we can defend without attacking, that we can keep safe without the unhealthy need to distrust others.”

“When we close our hearts for fear of others, when we build walls and barricades,” the pope said, “we end up depriving ourselves of the Good News of Jesus, who shares in the history and the lives of others” and is present in their suffering.

The wounds of others are the wounds of Jesus, he said. And “charity is the key that opens to us the door of heaven.”

Vilnius was the first stop on Pope Francis’ Sept. 22-25 to Lithuania, Latvia and Estonia. The three Baltic nations are celebrating the 100th anniversary of their declarations of independence after World War I. While declared Soviet republics in 1940, the countries were occupied by the Nazis during World War II and then lived under Soviet rule from 1944 to 1990.