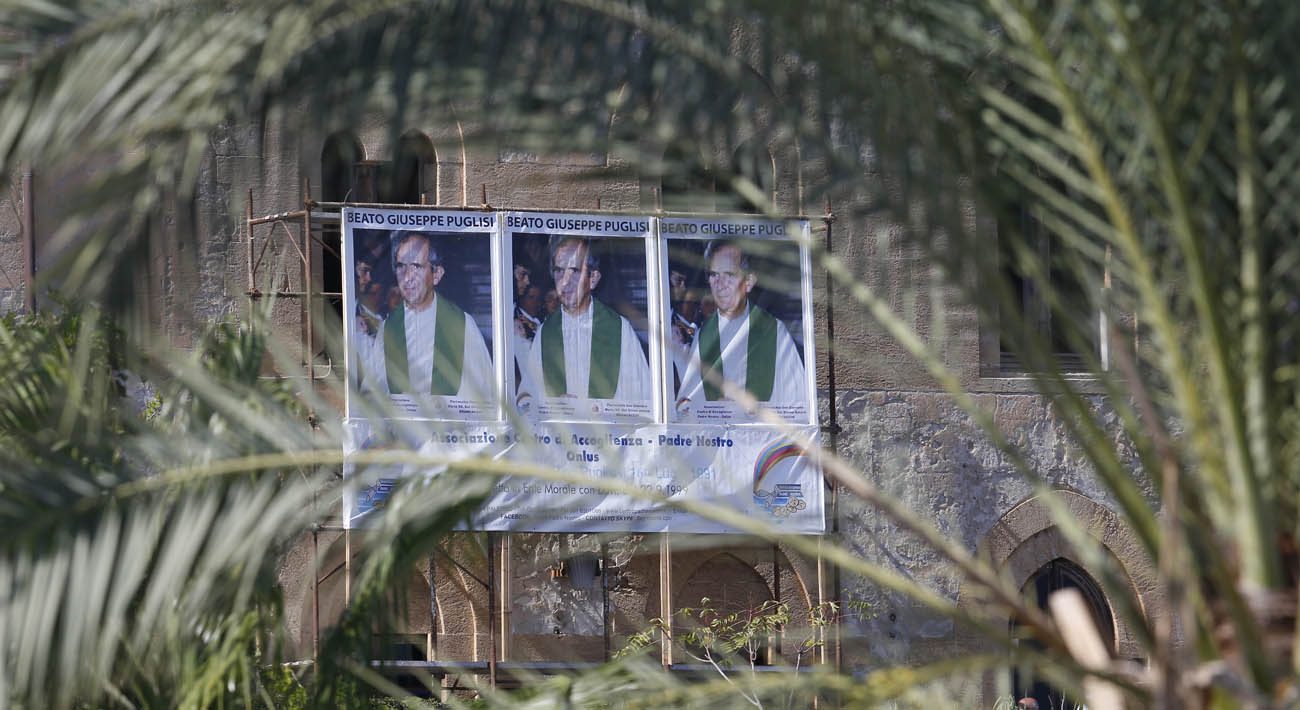 Posters honor Father Pino Puglisi, who was shot by the Mafia 25 years ago today, as Pope Francis celebrates Mass on the waterfront in Palermo, Sicily, Sept. 15. (CNS photo/Paul Haring)

PALERMO, Sicily (CNS) — Honoring a priest shot at point-blank range by the Mafia, Pope Francis insisted that true happiness and a real change in Sicilian society will come only when people love and care for one another rather than trying to grab as much money and power as they can.

“Having always leads to wanting. I have something and immediately want another and another without end. The more you have the more you want. It’s a horrible addiction,” Pope Francis said, celebrating Mass Sept. 15 in Palermo.

“On the other hand, one who loves finds himself and discovers how beautiful it is to help others has joy on the inside and a smile on the outside, just like Father Pino” Puglisi, the anti-Mafia priest gunned down Sept. 15, 1993, his 56th birthday.

Pope Francis made a day trip to Sicily to mark the 25th anniversary of the now-beatified priest’s martyrdom. His homily and speeches included denunciations of the Mafia and a call for the mafiosi to convert, but he focused especially on encouraging local Catholics to live their faith and to courageously stand up to all forms of injustice, which flow from and feed into the Mafia’s power.

And meeting Sicily’s bishops, priests, religious and seminarians in the afternoon, Pope Francis asked for special care in ensuring that the traditional religious festivals of the region’s cities and towns not be used, as they have been in the past, to give a pious varnish to members of the Mafia.

“I ask you to be attentive guardians so that popular religiosity is not instrumentalized by a Mafia presence,” he said. Stopping processions with a statue of Mary “and having her bow before the home of the Mafia chief,” as has been known to occur, “this will not do, absolutely not!”

Pope Francis began the day in Piazza Armerina in central Sicily, urging Catholics not to resign themselves to the problems in their lives, their families and their community, but not to ignore them either.

Strength for building a community that is solid and in solidarity with the poor will come from regularly celebrating Sunday Mass together, Pope Francis told the people.

“No, the whole Mass should last 40 minutes,” the pope said, exaggerating. “But the homily must not go more than eight minutes.”

The pope’s homily later at his outdoor Mass in Palermo lasted 17 minutes, but that included several long interruptions for applause.

Money and power do not liberate people, they make them slaves, the pope said in the homily. Those who are most free and most happy are those who give their lives in service to others, like Blessed Puglisi did.

“Twenty-five years ago today when he died on his birthday, he crowned his victory with a smile, that smile that kept his killer from sleeping,” the pope said, noting how the man arrested for the priest’s death said, “There was a kind of light in that smile.”

The pope’s visit to Sicily ended with an outdoor meeting with tens of thousands of teenagers and young adults in a Palermo square.

He urged them to dream and to love one another and to fight every form of corruption that flows from or builds up the Mafia.

“No to the Mafia mentality, to illegality, to the logic of crime, which are corrosive poisons for human dignity,” the pope said. “No to every form of violence. Those who use violence are not human. And the youngest of you, remember and promise me none of you will be bullies.”

“Promise me: No violence. No bullying,” he said. “No to resignation. Everything can change” if people open their hearts and stand firm in hope.

NEXT: Pope prays for young people, their diligence and courage