Pope prays for young people, their diligence and courage 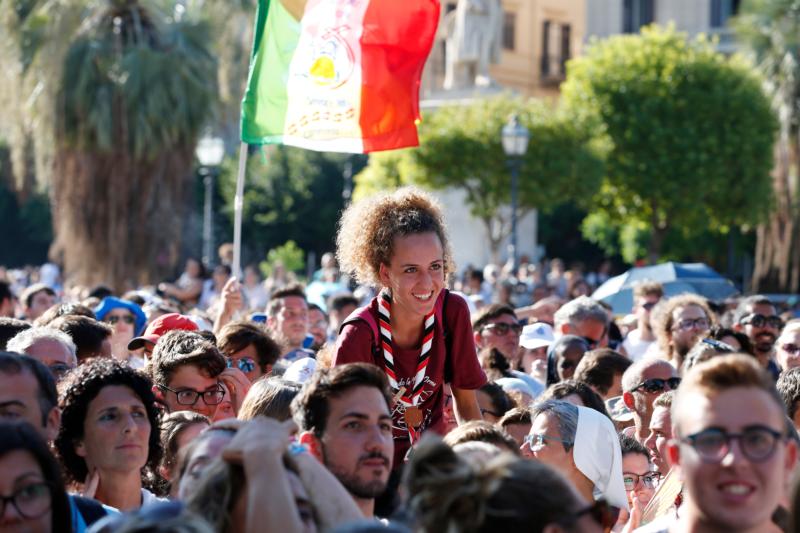 VATICAN CITY (CNS) — As he often does with a group made up of people of different faiths or no faith, Pope Francis gave young people in Palermo a special blessing, but not a ritual one.

After the pope’s meeting with teenagers and young adults Sept. 15, some Catholics on Twitter expressed outrage that there was no formal apostolic blessing in the name of the Father, Son and Holy Spirit.

Instead, the pope asked God to look upon the thousands of young people gathered with him in Palermo’s Piazza Politeama.

After giving his formal speech, Pope Francis apologized to the young people for delivering it while seated when they were all standing. But, he said, “my ankles are really sore.”

“Now I would like to give you a blessing, but I know that among you there are young Catholics, Christians, members of other religions and a few agnostics,” he said. “For this reason, I will give everyone a blessing, and I will ask God to bless the seed of restlessness that is in your heart.”

The pope clasped his hands, bowed his head and prayed: “Lord, Lord God, look upon these young people. You know each one of them. You know what they think. You know that they want to go forward, to make a better world.

NEXT: Catholic workers say U.S. aid cuts to Palestinians could be disastrous