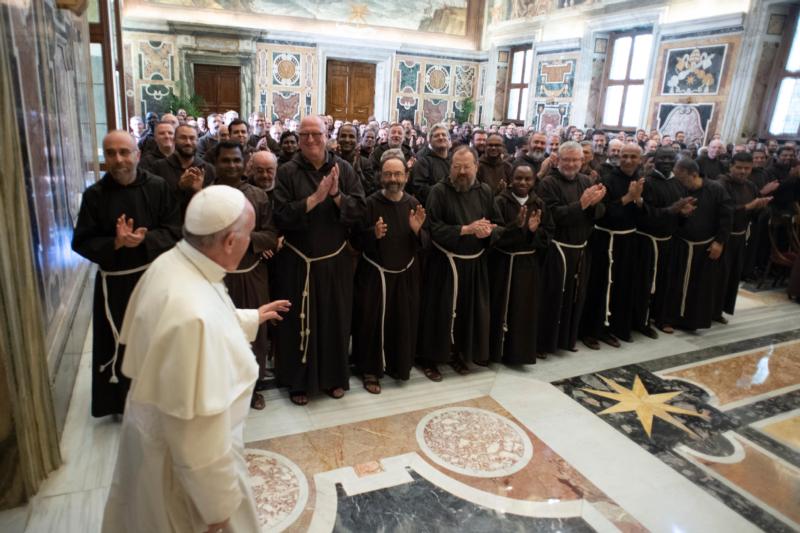 Pope Francis meets Sept. 14 at the Vatican with members of the Capuchin general chapter. During the chapter meeting, the Capuchins elected Italian Father Roberto Genuin as their new minister general. (CNS photo/Vatican Media)

VATICAN CITY (CNS) — Capuchins are called to be men of peace, reconciliation and prayer and to be close to all people, Pope Francis told members of the order.

“You are men who are able to resolve conflicts, to make peace (using) that wisdom that comes precisely from being close” to people, particularly those most in need, he told the group Sept. 14. The order was holding its general chapter in Rome Aug. 27-Sept. 16.

“You are men of reconciliation,” particularly through the sacrament of penance, because of being able to listen, smile, not ask too many questions and forgive, he said.

“Treasure this apostolate of confession, of forgiveness; it is one of the most beautiful things that you have — to reconcile people,” he told the friars, recognizing that “one needs patience in doing this, not words, a few words, but closeness and patience.”

He urged them to keep praying with simplicity, to be men of peace, “men of the people, men of reconciliation.”

“This is the way the church wants you to be. Hold onto that. And with that freedom and simplicity that is part of your charism,” he said in remarks spoken off-the-cuff.

In his prepared text, which he handed to them, he told the Capuchins that their charism was “more compelling than ever and is an appealing proposal for so many of the world’s young people, who are searching for authenticity and the essential.”

He asked that their fraternal way of life continue to “shine,” to keep at bay “every elitist behavior” and to always seek to encounter others, “especially the many who thirst for that merciful love that only Christ can offer us.”