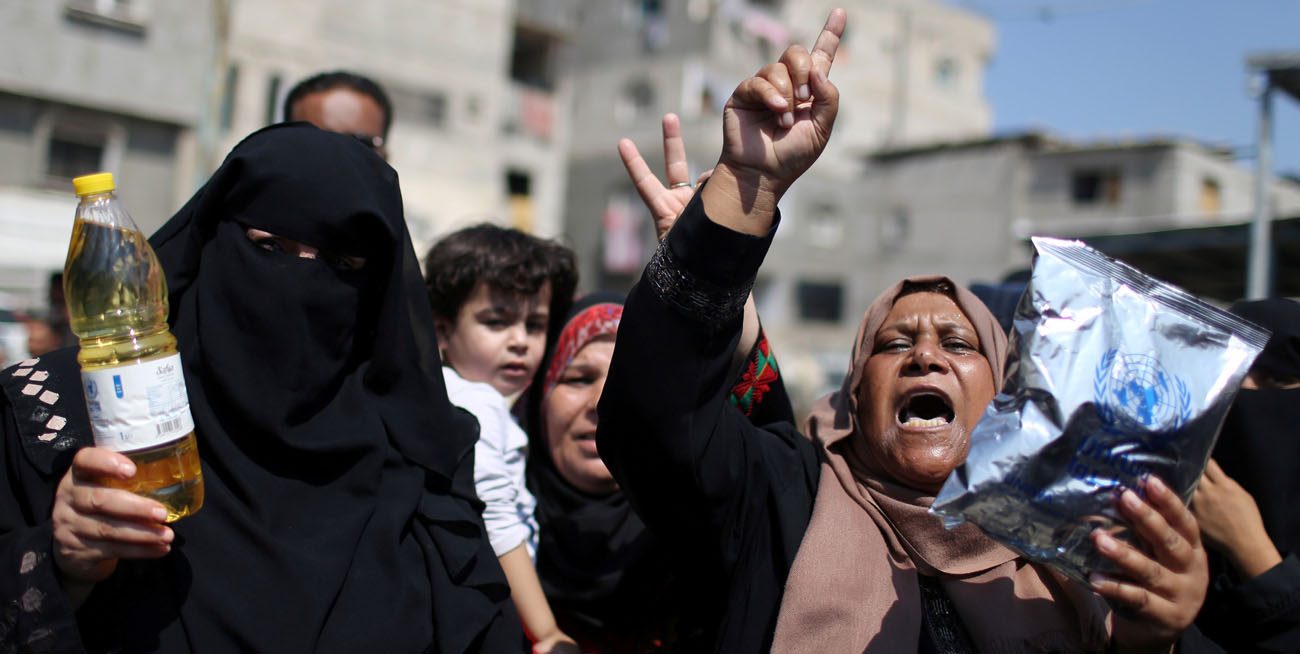 “There is concern that the humanitarian situation in Gaza, which is already dire, will be made worse,” Hilary DuBose, who represents Catholic Relief Services in Jerusalem, West Bank and Gaza, told Catholic News Service. “These massive budget cuts being made will impact CRS programs, though it is difficult to estimate (at this point) what that will be.”

In early September, U.S. President Donald Trump said his administration would cut $200 million of aid to medical and humanitarian aid providers. He had already announced that the U.S. would withhold $350 million from the U.N. Relief and Works Agency for Palestine Refugees in the Near East — amounting to more than one-quarter of the organization’s annual budget.

DuBose said CRS’ five-year $50-million program “Envision Gaza 2020” program, which is funded by USAID and provides food and necessity vouchers as well as short-term employment opportunities for Palestinians in Gaza, will be directly impacted by Trump’s decision.

The program has been providing assistance to 155,000 Gazans through USAID funds, she said, and by the end of October they will be serving “zero.”

With the aid from other organizations also cut off, the number of Palestinians facing a humanitarian crisis could reach 1 million, she said.

“I can only imagine how many people will be impacted, but this decision is only speeding up the humanitarian crisis,” she said.

DuBose said many of the recipients of their aid have been calling them worried about what this will mean for them. She said CRS will be able to continue helping a fraction of the families — a mere 760 — with food assistance thanks to special funds provided by Caritas Germany, Caritas Australia and a family foundation from the USA that wishes to remain anonymous.

“What we see across the world is that any time there is a crisis and people are not able to meet their basic needs, that causes instability. What shape that will take here, I don’t know, but we do expect some instability,” said Dubose.

“As a humanitarian actor and coming from a Catholic outlook I am very concerned that humanitarian aid would be used as a bargaining chip for achieving political aims,” DuBose said. “The people hurt by this won’t be the (Palestinian Authority) or Hamas. It is the poor and vulnerable in Gaza who have the misfortune to be there who will suffer.”

In a Sept.7 statement, CAFOD, the official aid agency of the Catholic Church in England and Wales, said withdrawal of U.S. aid for Palestinian refugees will “cause further suffering and damage prospects for a just peace.”

“CAFOD is clear that all people in the region have the right to enjoy a just peace, to have the opportunity to flourish and to live with dignity. This won’t be achieved by threatening access to vital services and denying the basic rights of refugees,” said a statement from Janet Symes, CAFOD’s head of region for Asia and the Middle East.

CAFOD called for greater action from the international community to support the 5 million registered Palestinian refugees.

UNRWA supplies Palestinians living in refugee camps in Gaza and the West Bank, Lebanon, Syria and Jordan with medical, educational and food assistance.

Trump has said he wants to see structural changes to the U.N. agency and is trying to pressure the Palestinians to return to the negotiating table with the Israelis. On Sept. 10, the U.S. State Department also said it would close the Palestinian mission in Washington.

The Palestinians already cut off contact with the U.S. government after Trump recognized Jerusalem as the capital of Israel last December.

In an Aug. 31 statement, Trocaire, the official overseas development agency of the Catholic Church in Ireland, called the decision to cut UNRWA funds “reckless” and said they were made by “ill-informed politicians” and would have “dire real-life consequences.”

Eighty percent of people in Gaza rely on international aid for survival, Trocaire said in its statement, and it called on Ireland and the EU to stand up to the U.S. administration on the issue.

UNRWA, which was founded in 1949, is the only U.N. organization dedicated specifically to one refugee population and their descendants who have inherited that status, said Yonatan Freeman of the political science department of the Hebrew University. From about the original 400,000 refugees in 1949, that number today reaches close to 5 million people today and continues to increase every year.

“A (peace) deal with the Palestinians (and Israelis) will cause UNRWA to go out of business, and a lot of people who are doing really well off because of UNRWA will be out of jobs and salaries,” said Freeman.

PREVIOUS: Pope prays for young people, their diligence and courage