Scandals create outrage, but there is time for conversion, pope says 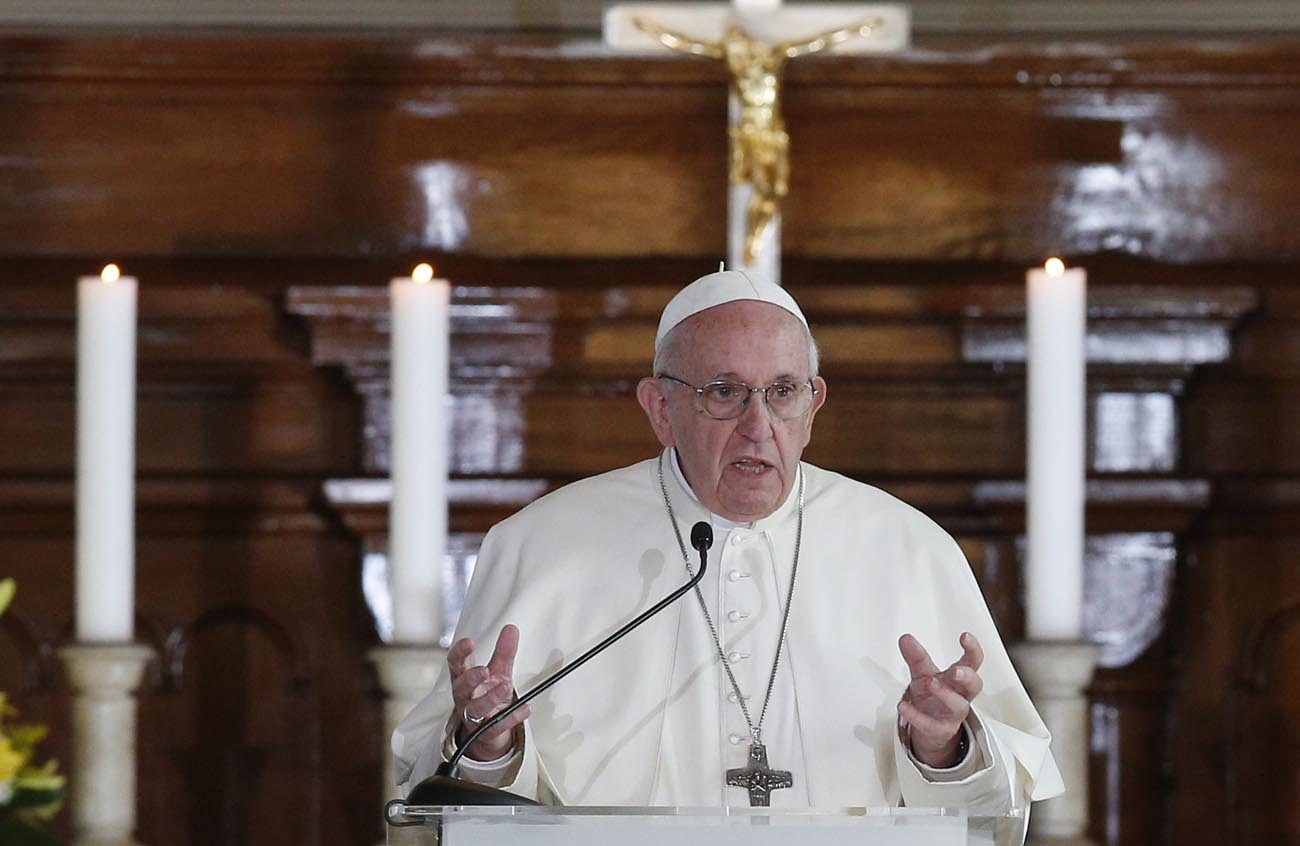 TALLINN, Estonia (CNS) — In what is probably the least religious country in Europe, Pope Francis said he is surprised by how many people hold firm to their faith despite all the sexual abuse and financial scandals in the Catholic Church.

“We know — as you have told us — that many young people do not ask anything of us because they do not believe we have anything meaningful to say about their lives,” the pope said Sept. 25 during an ecumenical meeting with young adults in Estonia.

Some young people “even ask to be left in peace because they feel the church’s presence is a bother or even irritating — and it’s true,” he said. And the bolder ones say, “Don’t you see nobody is listening to you anymore or believes what you have to say?”

Often they think the church has no clue about what is important to young people, he said, or that the church wants them just to be passive members of the congregation and parish programs.

And “they become outraged when they do not see a clear condemnation of sexual and financial scandals,” the pope said.

But the Catholic Church, he said, wants to respond to young people and “wants to be a transparent, welcoming, honest, attractive, communicative, accessible, joyful and interactive community.” That, he added, is one of the main aims of the Synod of Bishops on young people, which begins Oct. 3.

Still, he said, the amazing thing is that young people continue to find Jesus in the church and through its members and ministers.

Just as Jesus praised God for revealing truths to the “little ones,” Pope Francis told young Estonians, “I marvel that, for all our lack of witness, you continue to discover Jesus in our communities.”

“We know that where Jesus is, there is always renewal,” the pope said. “There are always new opportunities for conversion and for leaving behind everything that separates us from him and our brothers and sisters.”

“Beyond all our limitations and divisions, Jesus is still the reason for our being here,” he told them.

Young believers must be generous and courageous enough to share that hope with their peers, especially in a country where an estimated 75 percent of the population identify themselves as “nonreligious.”

Meeting the young people in Tallinn’s Kaarli Lutheran Church, Pope Francis listened to the stories of trials and faith shared by an 18-year-old Lutheran named Lisbel, whose father is sometimes a violent drunk; an Orthodox young man named Tauri, who said he found faith through the Divine Liturgy, lost it studying theology, but discovered it again through the Greek fathers of the church; and Mirko, a Catholic, who directs a theater company and believes beauty is the path to discovering God.

“We want to mourn with you when you mourn, to accompany and support you, to share in your joys, and to help you to be followers of the Lord,” the pope told them.

The Christian churches and, really, “every institutionally structured religious organization,” he said, “at times bring attitudes that make it easier for us to talk, give advice, speak from our own experience, rather than listen, be challenged and learn from what you are experiencing.”

Pope Francis assured the young people that the church does, in fact, want to listen to them, respond to their questions and support them as they seek the ultimate meaning of their lives.

And, he said, the church wants to help them come to know Jesus and to know God’s love.

Early in the afternoon, Pope Francis met at the city’s Catholic cathedral with individuals and families assisted by Catholic charities and Catholic religious orders. The clients, too, shared their stories with the pope and told him how they found material help, faith and love.

Pope Francis ended his visit in Tallinn’s Freedom Square, continuing to preach about memory, freedom and responsibility; the connection among the three was a theme that ran throughout his four-day visit to Lithuania, Latvia and Estonia in the year the three Baltic nations celebrated the 100th anniversary of their shortly lived independence after World War I.

Eighty British soldiers and 20 from Denmark were at the Mass in their khaki uniforms. They are part of a 1,000-strong NATO Enhanced Forward Presence deployment in Estonia.

Capt. Piers Odlum, who led the British group at the Mass, said the Estonians gave them 100 tickets for the Mass. Of the soldiers who went to Freedom Square, he said, “the majority are Catholic or very interested in this.”

The NATO troops are in Estonia “to reassure the Estonian population” and to signal to Russia that a defensive force is in place. The NATO deployment began in 2016 after Russia annexed Crimea and the Russian-supported war began in Eastern Ukraine.

When speaking to Catholic News Service, the soldiers were very cool, but as soon as Pope Francis arrived in the square, they did what every other person under 30 did: They got as close as possible to the barricade, turned their back to the popemobile path and tried to click the perfect selfie when the pope rode by.

Obviously aware of the very low rate of religious affiliation in Estonia, Pope Francis told people at the outdoor Mass, “Some people think they are free when they live without God or keep him at arm’s length. They do not realize that in doing so they pass through this life as orphans.”

Strength, he said, comes from listening to God and to other people and seeking ways to help all people share in the benefits of freedom, politically and economically.

“Some people speak in a loud voice, full of self-assurance — with no doubts or hesitation,” he said. “Others shout and hurl threats about using weapons, deploying troops and implementing strategies. That way they appear to be stronger.”

Such attitudes and behavior are all about gaining power, which runs counter to the Christian faith, the pope said. “You did not gain your freedom in order to end up as slaves of consumerism, individualism or the thirst for power or domination.”

NEXT: Pope prays for victims of ferry disaster in Tanzania