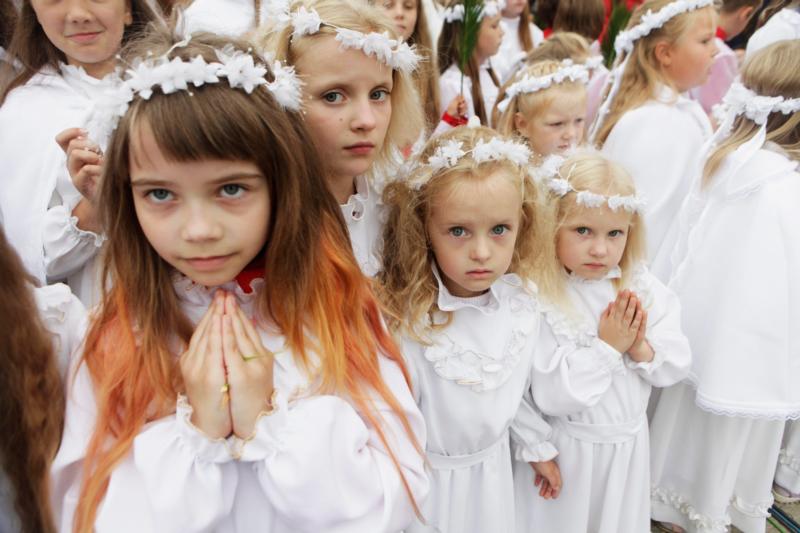 UPDATED – VATICAN CITY (CNS) — Pope Francis will travel to the eastern periphery of Europe to honor a faith that withstood a Nazi invasion and five decades of communist dictatorship and now is striving to help people live in freedom as authentic disciples of Christ.

St. John Paul II visited the countries in 1993 as they were at the beginning stages of solidifying democracy and living with full religious liberty.

Bishop Philippe Jourdan, the apostolic administrator of Estonia’s tiny Catholic community, told Catholic News Service that the motto of the pope’s visit to Estonia “is a well-known Estonian song, ‘Mu suda arka ules,’ which means ‘Wake up my heart.’ It is more or less what we all — Catholics, non-Catholics or nonreligious people — are waiting for: that the pope helps us to find a new hope in our heart and in our society, as was the case in the years immediately after the end of the Soviet time.”

“Materialism and secularization are now very strong in Estonian society,” he said, “and we need a new start.”

On a special website for the visit, Bishop Jourdan wrote that when St. John Paul visited 25 years ago, his message was, “‘Do not be afraid!’ In those years, the Estonian state was like a sick person who had just woken up from a coma, treading with insecure steps, but with great expectations of peace, of unity with the rest of Europe, of great ideals, perhaps also of material things but with great hope.”

A quarter-century later, the independent governments are stable, and the three countries are full members of the European Union, he said. But “while Estonian society has reached a good level of material security, spiritual security is lacking today.”

Archbishop Gintaras Grusas of Vilnius, Lithuania, said the 100th anniversary of independence commemorations are “a time of reflection on the gift of freedom, as well as the cost of freedom.”

“This gift requires us to work for the common good and for peace,” he wrote in the September issue of Europeinfos, the newsletter of the commission of bishops’ conferences in E.U. countries and the Jesuit European office. “The 50 years of Soviet occupation require a reflection on the cost of that freedom — the suffering, deportations, persecutions and sacrificed lives that must never be forgotten.”

Pope Francis is expected to repeat advice he often gives: Remember the past and honor it, but also face the present with courage and the future with hope.

In each of the nations, the pope will pay homage to those who died in the struggle for freedom and human dignity. And, in Vilnius Sept. 23, he will pause to pray at a memorial to the Jewish victims of the Nazis. The pope’s visit will take place on the 75th anniversary of the Nazi’s liquidating the ghetto where they had forced up to 40,000 Jews to live. Almost none of them survived.

The pope is scheduled to place flowers at the foot of the Freedom Monument in Riga, Latvia, Sept. 24. The monument honors those who fought for Latvia’s independence from 1918 to 1920. Erected in 1935, Soviet authorities repeatedly announced plans to take it down but relented in the face of public pressure.

The monument “is a symbol of Latvian independence, which has been preserved through all the years of Soviet ideology. It reminds us that true freedom can be preserved even amid external persecution and oppression,” Archbishop Zbignevs Stankevics of Riga told CNS.

Relations with other Christians and with nonbelievers also are expected to play a big role in the pope’s trip. He has an ecumenical prayer service planned Sept. 24 in the Lutheran cathedral in Riga, Latvia, and an ecumenical meeting with young people the next day at a Lutheran church in Tallinn, Estonia.

Estonia is the Baltic nation with the smallest Catholic population and with the largest percentage of people claiming no faith at all, Bishop Jourdan said.

With the fall of the Iron Curtain, the three nations also have faced the challenge of emigration, especially in the years following the global economic crisis that began in 2008.

Estonia’s population declined, Bishop Jourdan said, “but far less than Latvia’s and Lithuania’s, and for the past three years there has been a slight increase in the population, in part because of an incipient immigration. Perhaps it is due to the fact that the economic situation in Estonia is better than in Latvia or Lithuania.”

Archbishop Stankevics said Latvia has experienced “a significant population drop in recent years, and the impact of emigration is felt in our parishes.”

The only way to reverse the process is to create more jobs in an ethical and sustainable way, the archbishop said. In addition, “we need to develop work qualification courses to help people to be skilled in jobs really needed in the local economy.”

Archbishop Grusas told CNS Sept. 13 that many Lithuanian emigrants were “looking for change or trying to get away from past hurts,” but there is some evidence that people are starting to come back to the country.

Emigration is part of the “whole gamut of social problems” Pope Francis is expected to address, but always in the context of helping people find a hope-filled response, the archbishop said.

Lithuania’s Catholics were known for the heroic way they preserved the faith under communism despite harsh repression. The challenges to faith are different today, the archbishop said, not only because of the influence of secularization and materialism, but also because the communists made it so difficult to educate people in the faith.

“Independence changed that — there is a lot of information available now,” the archbishop said, “but the challenge is how to live in freedom and learning what true freedom is, not just doing what we want, but knowing we have obligations and responsibilities, too.”

In Latvia, Archbishop Stankevics said, “since the collapse of communism, faith has perhaps lost its traditional devotional forms and has developed more into commitment of personal relationships with God and service in the church.”

At the same time, he said, “threats to the faith arise from the present social, economic and cultural challenges.”

In a July interview with Vatican News, Archbishop Grusas said he saw “the finger of God” and Pope Francis’ own priorities reflected in his choice to visit the Baltics, “the periphery of the European Union.”