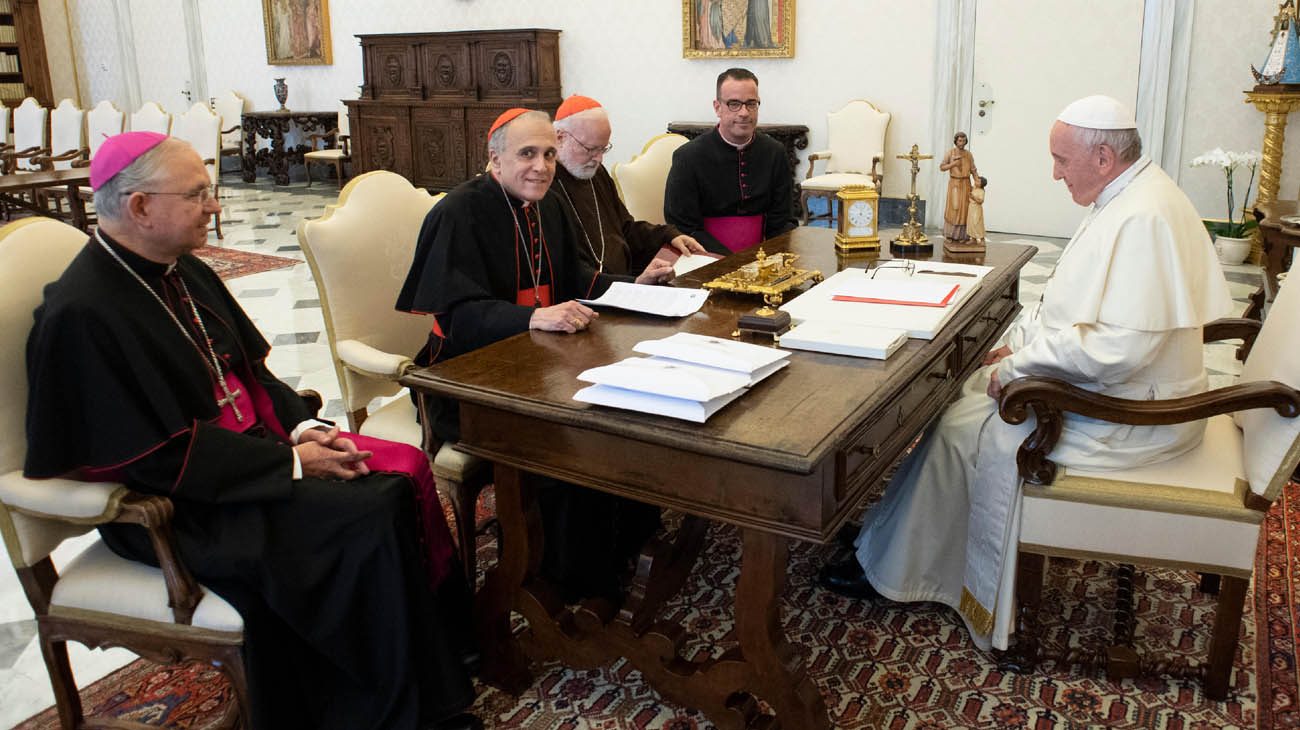 Pope Francis meets with officials representing the U.S. Conference of Catholic Bishops at the Vatican Sept. 13. Pictured from left are Archbishop Jose H. Gomez of Los Angeles, vice president of the conference, Cardinal Daniel N. DiNardo of Galveston-Houston, president of conference, Cardinal Sean P. O'Malley of Boston, president of the Pontifical Commission for the Protection of Minors, and Msgr. J. Brian Bransfield, general secretary of the conference. (CNS photo/Vatican Media)

VATICAN CITY (CNS) — The leaders of the U.S. bishops’ conference said they shared with Pope Francis how the church in the United States has been “lacerated by the evil of sexual abuse.”

“He listened very deeply from the heart,” said a statement released after the meeting Sept. 13.

Cardinal Daniel N. DiNardo, president of the U.S. Conference of Catholic Bishops, met the pope at the Vatican along with Cardinal Sean P. O’Malley of Boston, president of the Pontifical Commission for the Protection of Minors, Archbishop Jose H. Gomez of Los Angeles, vice president of the USCCB, and Msgr. J. Brian Bransfield, general secretary of the conference.

The USCCB statement described the encounter as “a lengthy, fruitful and good exchange,” but did not enter into details about what was discussed or whether any concrete measures were taken or promised.

“We look forward to actively continuing our discernment together, identifying the most effective next steps,” the statement said.

Cardinal DiNardo originally announced that he was requesting a meeting with Pope Francis last Aug. 16. The request followed the release of the Pennsylvania grand jury report on sexual abuse cases in six Pennsylvania dioceses and the announcement of credible allegations of child sexual abuse committed by Archbishop Theodore E. McCarrick, the former cardinal-archbishop of Washington.

Two dioceses also had announced allegations of inappropriate contact between Archbishop McCarrick and seminarians, resulting in settlements totaling more than $100,000.

In his Aug. 16 statement, Cardinal DiNardo said that the USCCB Executive Committee had established three goals: “an investigation into the questions surrounding Archbishop McCarrick; an opening of new and confidential channels for reporting complaints against bishops; and advocacy for more effective resolution of future complaints.”

The U.S. bishops specifically requested the Vatican to conduct an apostolic visitation into questions surrounding Archbishop McCarrick. Opening a new process for reporting complaints against bishops and the more effective resolution of such complaints also would require the support and involvement of the Vatican, since only the pope has the authority to discipline or remove bishops.

Following allegations by Archbishop Carlo Maria Vigano that Pope Benedict XVI had imposed sanctions on Archbishop McCarrick and that those sanctions had been ignored by Pope Francis, Cardinal DiNardo issued another statement Aug. 27 reiterating his call “for a prompt and thorough examination into how the grave moral failings of a brother bishop could have been tolerated for so long.”

Archbishop Vigano’s statement “brings particular focus and urgency to this examination,” the cardinal’s statement said. “The questions raised deserve answers that are conclusive and based on evidence.” 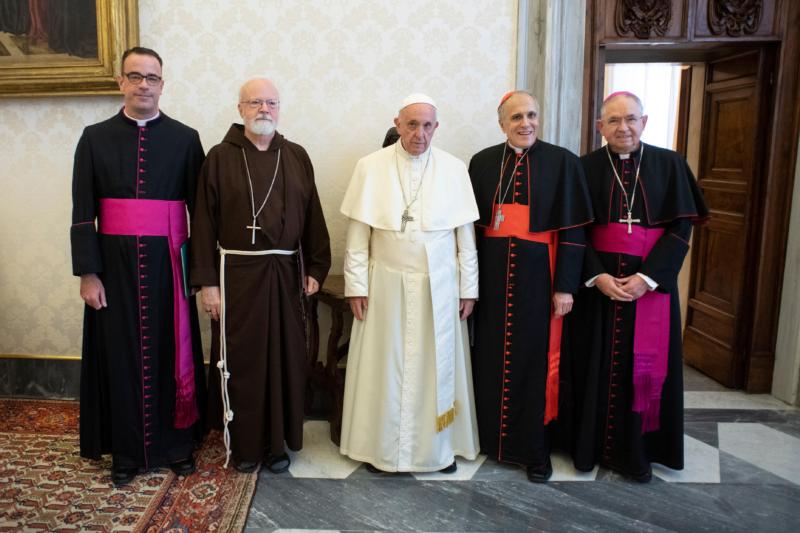 NEXT: To Europe’s periphery: Pope to visit Baltic nations in late September