WASHINGTON (CNS) — Jesuit Father Matt Malone, editor of America magazine, has defended his publication’s editorial that called for the withdrawal of Judge Brett Kavanaugh’s nomination to the Supreme Court.

In an article published Oct. 2 on America’s website, Father Malone said he was attempting to address readers’ criticisms about the editorial’s timing and motivation. 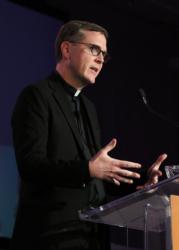 The editorial in question, “It is time for the Kavanaugh nomination to be withdrawn,” was published online Sept. 27 just hours after the Senate Judiciary Committee heard testimonies from Christine Blasey Ford and Kavanaugh.

The editorial is the top story on the publication’s site, www.americamagazine.org, followed now by Father Malone’s piece: “Why America magazine called for the withdrawal of Brett Kavanaugh’s nomination.”

The priest writes: “America has a long-standing editorial interest in the U.S. Supreme Court. We have weighed in for more than a century about matters pertaining to the court, including recommending, or not, the confirmation of specific nominees.”

In other words, the New York-based magazine’s editorial board was not doing anything new.

“The editorial decision to withdraw support for Judge Kavanaugh was based on the fact that he no longer had the confidence of a significant part of the U.S. citizenry. That lack of confidence would be damaging to the authority of the court in the years ahead if he were confirmed,” Father Malone wrote.

He also pointed out that the magazine had endorsed Kavanaugh’s nomination in July, prior to Ford’s public allegation against him. He said the editors were obliged to inform readers of the new information that “might change the opinion expressed in an earlier editorial statement.”

“To do otherwise would be to act in bad faith,” he added.

Father Malone pointed out that when the editorial was written the Judiciary Committee had been scheduled to vote the very next day about moving Kavanaugh’s nomination forward to a vote to the full Senate without further investigation.

In an 11-10 vote Sept. 28, the committee approved advancing Kavanaugh’s nomination to the Senate floor, but then the Republicans approved a proposal by Sen. Jeff Flake, R-Arizona, that the FBI be given one week to investigate Ford’s allegations before a confirmation vote take place on the Senate floor.

The FBI wrapped up its investigation Oct. 3 and sent its report to committee members for their review. A confirmation vote on Kavanaugh was expected Oct. 6 in the Senate.

America magazine’s editorial board was put in “what ethicists call a ‘forced option’ situation, one in which to do nothing is to do something,” said Father Malone. “For the editors to say nothing would effectively have left our earlier recommendation on the table.” And since the situation had changed, he said, “to say nothing would have been disingenuous.”

“That Judge Kavanaugh was educated at a Jesuit institution and has supported Jesuits throughout his career are facts that made our editorial deliberations particularly painful. But we could not allow Mr. Kavanaugh’s Jesuit ties to be dispositive, ” Father Malone wrote.

Kavanaugh graduated from Georgetown Preparatory School in the Washington suburb of North Bethesda, Maryland, and has tutored at a middle school for boys, Washington Jesuit Academy.

Father Malone said the editorial board could not allow Kavanaugh’s Jesuit ties to “predetermine our opinion in the matter. If we had done that, we would have failed in our duty to offer a fair and balanced opinion to our readers, no matter the cost.”

He said there was no course of action the magazine could take “that would not cause pain and division,” which he said reflects in part the “national nightmare we are all living through.”

The online comments about the Sept. 27 editorial reflect some of this division. A few readers agreed with the magazine but most disagreed. Some accused the magazine of bias and of abandoning Kavanaugh and asked to discontinue their subscription. Many readers used the space to say what they felt about the Senate Judiciary Committee hearings.

Readers also were primarily unhappy with Father Malone’s defense of the editorial. In the comments section, a few readers said they appreciated his explanation but most were critical of it and also were critical of Kavanaugh’s treatment by the media in general.

America’s Sept. 27 editorial said: “People of goodwill can and do disagree” about the credibility of both Christine Blasey Ford’s accusations and Kavanaugh’s denials and said that as editorial writers they have “no special insight into who is telling the truth.”

But because questions remain and might be not cleared without further investigation, “we recognize that this nomination is no longer in the best interests of the country,” they wrote.

On July 9, the day President Donald Trump announced that Kavanaugh was his Supreme Court nominee to replace the seat left vacant by Justice Anthony Kennedy’s retirement, America magazine published an online editorial in praise of Kavanaugh as the potential “fifth vote needed to overrule Roe v. Wade, the 1973 landmark ruling that legalized abortion in every jurisdiction of the United States.”

The magazine’s revised editorial reinforced some of the points it previously made, noting that there are “many good reasons to support the nomination of a qualified judge who is committed to a textualist interpretation of the Constitution to the Supreme Court.”

“Over time,” it said, “such an approach may return the question of abortion to the states, where it belongs given the Constitution’s silence on the matter.”

PREVIOUS: Norbertine brother sees caring for rescued cats at shelter as a ministry