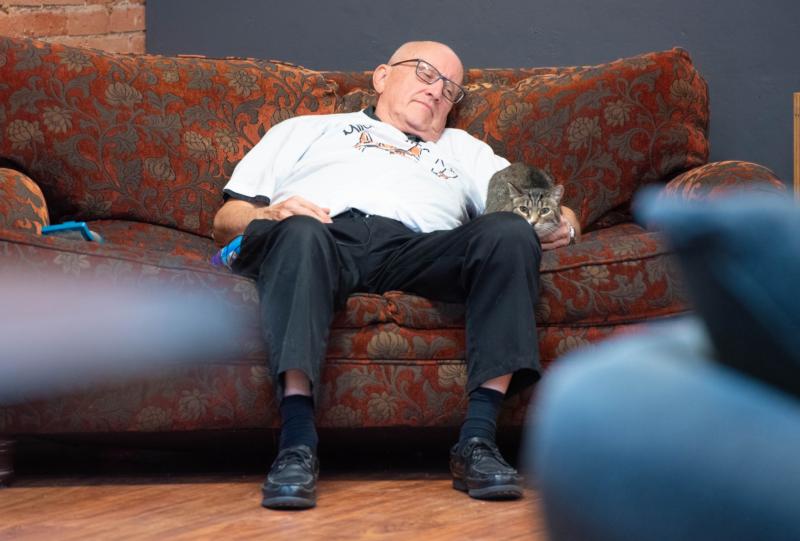 Norbertine Brother Terrence Lauerman shares a couch Sept. 26 with one of the rescue cats at the Safe Haven Pet Sanctuary in Green Bay, Wis. A post on Safe Haven’s Facebook page, with photos of Brother Terrence napping with cats, recently went viral on social media. (CNS photo/Sam Lucero, The Compass)

GREEN BAY, Wis. — St. Francis of Assisi, the patron saint of animals, would be pleased with the attention Norbertine Brother Terrence Lauerman has received as a volunteer at the Safe Haven Pet Sanctuary.

The nonprofit center in downtown Green Bay specializes in rescuing cats with special needs from euthanasia.

Brother Terrence, 75, spends most afternoons cuddling with cats, petting and grooming them — and even napping with them.

It was the cat napping — captured in photos by Safe Haven owner Elizabeth Feldhausen and posted Sept. 18 to the pet sanctuary’s Facebook page — that caught the social media world’s attention.

Along with three photos of Brother Terrence taking naps with cats, Feldhausen wrote: “We are so lucky to have a human like Terry. Terry just came along one day and introduced himself. He said he’d like to brush cats. Eventually, it became every day. He brushes all of the cats and can tell you about all of their likes and dislikes. He also accidentally falls asleep most days.”

Soon after posting it, the Safe Haven’s Facebook page began to receive likes, comments and shares. It was picked up by BuzzFeed News, Reddit and other online news sites.

Brother Terrence quickly became an internet sensation and has been interviewed by the BBC, ABC-TV’s “Good Morning America” and local TV and radio stations.

“I got an email from a friend in Portugal who said, ‘You’re in the Portuguese newspapers here,'” he said.

According to Feldhausen, when she told Brother Terrence about the likes and shares, he said to her: “Now if all of those people would just donate $5 to help the kitties, that would make such a difference.”

Other Facebook followers agreed, and Feldhausen set up a “Terry’s Fundraiser for Safe Haven.” So far, more than $60,000 has been donated to Safe Haven.

Brother Terrence is surprised, but happy that Safe Haven has received the attention — and the donations.

“It was a simple thing,” he said. “I fell asleep petting a cat and that’s it. People do a lot more important things, I suspect.”

The Norbertine brother has been a friend to cats for many years. In December 2017, the Bay Area Humane Society of Green Bay honored him at a banquet for contributing more than 2,250 hours of his time to homeless cats at two other shelters.

“I’ve always liked cats, and once I retired I decided I wanted to do something that was pleasurable, fun and useful,” he told The Compass, newspaper of the Diocese of Green Bay. “Just getting cats adopted, it’s a great thing to get them into a home where they can be happy.”

Brother Terrence has been volunteering at Safe Haven for about four months. He likes the fact that cats are not caged there. “Here, the cats socialize with each other and it’s just a more homey environment that is more natural,” he said.

Before retiring, Brother Terrence spent 35 years teaching Spanish at Norbertine and public institutions around the world, including Lima, Peru, and the Virgin Islands. He decided to join the Norbertines after enrolling at St. Norbert College in De Pere in 1961.

“It was an educational order and I always wanted to be a teacher,” he said. Brother Terrence entered the Norbertine order in 1963 and graduated from St. Norbert College in 1967.

“I enjoyed my years in teaching, but right now I’m really having a good time doing this,” he said. “Retirement is wonderful.”

Brother Terrence said his fellow Norbertines were a bit surprised by the attention he’s received as a volunteer at Safe Haven.

Caring for abandoned and ailing cats is also in line with Pope Francis’ encyclical “Laudato Si’,” he said.

“The whole encyclical is about the idea of environment, water, air, animals,” he said. “This is a unified planet we live on and the care of animals is certainly part of it.

Since it opened in December 2016, Safe Haven has rescued nearly 300 cats, said its founder, Feldhausen.

She said donations resulting from Brother Terrence’s Facebook post will help the shelter continue its service, like paying for “a couple of surgeries that are needed,” and for making the facility “more energy efficient.”

“The rest we will save for a rainy day,” she added.