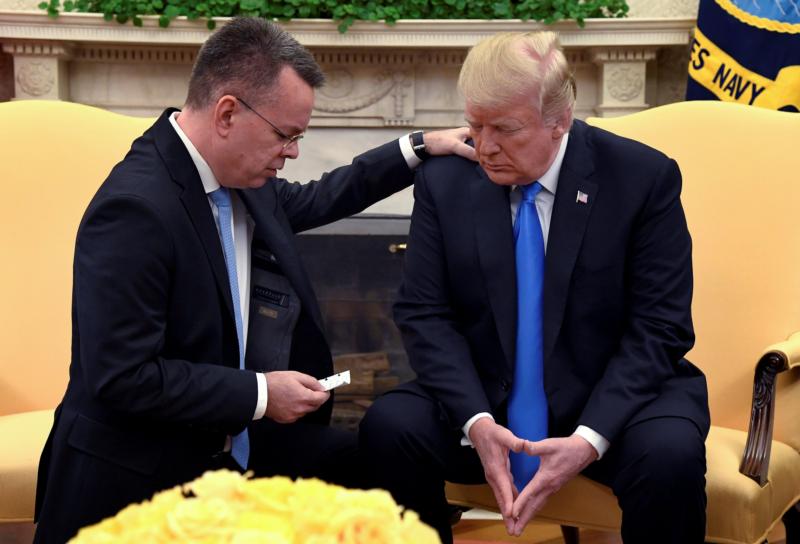 The Rev. Andrew Brunson prays with U.S. President Donald Trump Oct. 13 in the Oval Office of the White House in Washington. A Turkish court Oct. 12 ordered the release of the American pastor, who runs the small Resurrection Church in Izmir, Turkey, ending his 24-month detention. Rev. Benson had been accused of spying and aiding terrorists. (CNS photo/Mike Theiler, Reuters)

WASHINGTON (CNS) — The Rev. Andrew Brunson, an evangelical Presbyterian pastor who had been jailed by Turkish authorities for nearly two years, returned to U.S. soil Oct. 13 after being freed the day before by Turkey.

Rev. Brunson, who had been held without charges for a year, was convicted Oct. 12 on a charge of aiding terrorism and sentenced to time served.

After his captivity brought an outcry from religious freedom circles in the United States and elsewhere, he was moved to house arrest, and the Trump administration placed sanctions on the Turkish officials deemed responsible for holding Rev. Brunson.

During an Oct. 13 meeting at the White House with Rev. Brunson, President Donald Trump said he welcomed his release, but added no deal had made with Turkey to secure it. He also rejected the notion that Rev. Brunson’s release had anything to do with Turkey wanting the United States to back up its assertion that Saudi journalist Jamal Khashoggi was murdered inside the Saudi Arabian consulate in Istanbul earlier in October.

Rev. Brunson and his wife, Norine, who had been in Turkey 23 years, were seeking permanent residency status in Turkey at the time of his arrest Oct. 7, 2016. Norine Brunson also had been arrested and held for 13 days before being released. The pastor led a small congregation called Resurrection Church in the ancient city of Izmir.

Turkey had originally offered exchanging Rev. Brunson for Muhammed Fethullah Gulen, an Islamic preacher living in exile in the United States and whom Turkish officials believed had backed the failed coup from the U.S. American authorities refused the deal.

Speaking July 24 at a U.S. State Department conference on religious freedom, Rev. Brunson’s daughter, Jacqueline Brunson Furnari, said three trial dates for her father had come and gone, adding she believed it was because “there has not been one witness to produce one shred of evidence” to support the charge.

Even so, Furnari said, one judge at a pretrial hearing declared that “all the prosecution witnesses’ testimony would be taken as truth, as there no need for evidence,” meaning “the court has effectively denied him a defense.”

“My family has suffered greatly because of the false and absurd charges,” she said. Furnari told of the time she and one of her brothers spent one hour in August 2017 visiting their father in jail — the only time until his release that she had seen him.

The pastor, during that jail visit, had voiced his apprehension of the coming winter. “That he was concerned about the coming winter in August shows you how hopeless he thinks his situation is,” Furnari said, adding her father told them, “My faith teaches me to forgive, so I forgive those who testified against me.”

Furnari got married while her father was imprisoned — but only in a civil ceremony, waiting for him to be freed so he can walk her down the aisle to be married in a church service.

At the Oct. 13 White House meeting, Rev. Brunson asked if he could pray for Trump, then fell to one knee next to the president and asked God to give Trump “supernatural wisdom to accomplish all the plans you have for this country and for him.”

In an Oct. 12 statement, U.S. Rep. Chris Smith, R-New Jersey, said he was “overjoyed” the pastor had been released and was “coming home safely” to the U.S. He issued the remarks as chairman of the House Subcommittee on Global Human Rights and co-chairman of the U.S. Helsinki Commission.

“For almost two years he was the victim of efforts by President (Recep Tayyip) Erdogan and the Turkish state to crack down on religious freedom as he languished in prison,” Smith said about Rev. Brunson. He urged the U.S. government to hold “the perpetrators of his unjust imprisonment accountable by maintaining and strengthening targeted sanctions on complicit Turkish officials.”