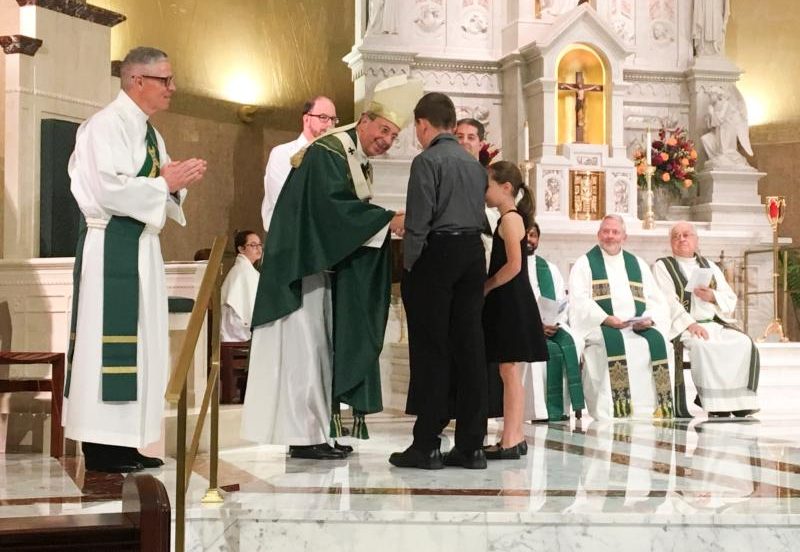 Archbishop William E. Lori of Baltimore, who is apostolic administrator of the Diocese of Wheeling-Charleston, W.Va., accepts the gifts during Mass Oct. 6 at the Basilica of the Co-Cathedral of the Sacred Heart in Charleston. Healing of the church can be brought about by all faithfully living their God-given vocations, Archbishop Lori said during his homily. (CNS photo/Colleen Rowan, The Catholic Spirit)

CHARLESTON, W.Va. (CNS) — Healing of the church can be brought about by all faithfully living their God-given vocations, Archbishop William E. Lori of Baltimore told Catholics in the Diocese of Wheeling-Charleston during a visit to the statewide diocese in early October.

As apostolic administrator, the archbishop has made a commitment to traveling around the diocese to learn about and understand its pastoral workings and its Catholics.

He celebrated Mass at the Basilica of the Co-Cathedral of the Sacred Heart in Charleston Oct. 6. The day before he was in Morgantown where he addressed roughly 450 diocesan Catholic school principals and teachers attending a professional development day.

While happy to be with the Catholic faithful of Charleston for Mass, Archbishop Lori said at Mass that he shares their sadness in what brought him there, especially the investigation of allegations of sexual harassment of adults by Bishop Michael J. Bransfield, former head of the diocese.

There is a crisis in church leadership because of the Bransfield investigation as well as the Pennsylvania grand jury report on a 70-year period in six dioceses of allegations — and claims of a cover-up — of sex abuse by priests and other church workers in six dioceses of the state, starting in 1947; and allegations of sexual misconduct by Archbishop Theodore E. McCarrick, former cardinal-archbishop of Washington.

In response, a number of action steps have been proposed, Archbishop Lori said, including a national third-party reporting system for allegations against bishops, the development of a code of conduct for bishops, and an investigation in the U.S. against Archbishop McCarrick.

“These steps are but the beginning of a long process of restoring trust and credibility, bringing about healing, and refocusing the church’s energies on spreading the Gospel and serving the poor,” Archbishop Lori said.

The faithful are very much a part of this process, he said, by all they have done and are doing to create a safe environment for children and young people in parishes, schools, and other ministries. Most notably, compliance with long-standing policies on training, background checks and the immediate reporting of all allegations to civil authorities, he said.

“For all you are doing in this parish and throughout the diocese to protect children and young people as also to offer support to victims of abuse, I truly do thank you,” Archbishop Lori said.

Another important way that everyone — lay faithful and clergy — can help rebuild and heal the church, the archbishop said, is by living faithfully their God-given vocations. For many of those gathered at the Mass, their vocation is marriage and family, he said.

“By living the vocation to marriage and family with fidelity and generosity,” he explained in his homily, “your homes become what are called ‘domestic churches,’ ‘little churches,’ holy places where young people are brought into the world, where they are nurtured, formed in faith and virtue, and equipped to embrace their God-given vocations.

“It is your homes, as domestic churches, that build up the parish community, the larger church, and wider culture of which we are a part.”

The love of husband and wife, the archbishop continued, provides in God’s grace a model for the way pastors should love the people of God.

“As priests and bishops, we are called not just to love our jobs but enter into a deep union of love with the Lord and with you whom we are privileged to serve in the Lord’s name and person,” Archbishop Lori said. “The standard for marriage that the Lord holds out to us in tonight’s Gospel applies also to us, your priests, who are called to love you by living celibacy chastely and fruitfully … if only we are willing to abandon that hardness of heart that can so easily overtake us.

“The hardness of heart which Jesus condemns in the Pharisees has regretfully surfaced in the lives of clergy who have compromised their commitment to celibacy and who have even gone so far as to harm gravely the children whom Jesus loved so tenderly and purely,” the archbishop continued.

“Such obstinacy to God’s grace,” he said, “is shared by bishops who failed to address the infidelities of their brother bishops and priests forthrightly.”

He said, “For our hardness of heart, we your shepherds ask not only for your forgiveness but we also ask God for the grace of a broken and contrite heart, the grace of sincere and lasting repentance before God and before the church.

Archbishop Lori said that the only way the church will heal, trust will be restored and “vigor will be restored to the church’s mission is for us, your priests and bishops to live our vocation faithfully and indeed for you to live yours with renewed generosity and joy.”

In his talk to principals and teachers in Morgantown the day before, the archbishop said: “Day in and day out you devote your time, energy, talent and skill in helping to form new generations to be men and women of faith who will also be equipped to carry forward the mission of the church and to create a society that is just, generous, and compassionate.”

After leading a prayer service to open the gathering, he said he understands the challenges teachers face and the added challenges they face now within the church.

The failure of church leadership has no doubt made their job more difficult right now, he said and apologized for that. “You deserve better,” he said.

As he travels around the diocese, Archbishop Lori wants to learn about its pastoral strengths and hopes to share this information for the process of choosing a new bishop for Wheeling-Charleston.

The diocese, he said, deserves a good shepherd to guide it into a future full of hope.

NEXT: American pastor freed after two years in Turkey returns to U.S.