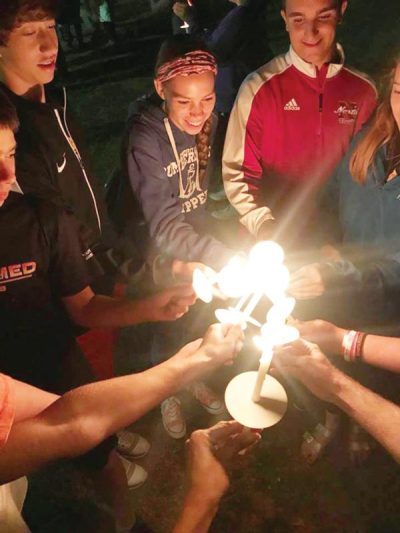 Young participants had opportunities for praise and worship, to listen to engaging talks and visit with local seminarians and priests from the diocese, during a Sept. 8 Providence Diocesan Youth Day in Cumberland, R.I. (CNS photo/courtesy Diocese of Providence)

CUMBERLAND, R.I. (CNS) — The hundreds of kids, teenagers and young adults who turned out for Providence’s first Diocesan Youth Day on a Saturday in September were “Enflamed” with the love of Christ.

“It’s just so great that so many kids here are open to anything God has for them,” said Juliette Fontaine, 15, a parishioner of Holy Trinity Church in Woonsocket.

Fontaine, a member of the diocesan leadership team, was one of 170 youths from 21 different parishes who attended the Diocesan Youth Day at Our Lady of Fatima Church in Cumberland.

“I’ve been very blessed,” Fontaine told the Rhode Island Catholic, Providence’s diocesan newspaper. “It’s amazing that so many kids are here and have come to learn about their faith and to praise God.”

The Diocese of Providence has held youth day events in the past, but the Sept. 8 gathering was the first of its kind in the diocese.

Organized like a World Youth Day gathering or one of the Steubenville youth conferences sponsored around the country by Franciscan University of Steubenville, Ohio, the Diocesan Youth Day included events for teens and young adults.

Organized under the theme “Enflamed,” events included worship music, speakers, eucharistic adoration and Mass, not to mention volleyball and frisbee.

The day’s first general session included a talk — “God Is Real” — by evangelist-musician Michael Mette and his family. Afterward, attendees had the option of several workshops and prayer experiences that included “Forming Good Habits,” “Faith-filled Relationships” and “You’re Catholic?!”

Louise Dussault, director of the Office of Catholic Youth Ministry for the Diocese of Providence, said the day was “awesome” and “a real faith-enriching event” with “some great participation by young people.”

In addition to the teens and younger kids who came out for the event, Dussault added that more than young adults from different parishes and groups also attended Diocesan Youth Day. She also noted the day would not have been possible without the efforts of more than 40 adult staff and volunteers.

She also said praised the generosity of Our Lady of Fatima Church for allowing the event to take place there. She also Mary’s intercession for holding back the rain on what was an overcast day.

Bishop Tobin, who was celebrant of Mass for participants, told them: “We hope programs like this will keep you strong in your faith and keep you close to Christ.”

After a talk by seminarian Dan Mahoney on “Navigating Your Purpose,” the teens and young adults spent almost an hour in eucharistic adoration before a candlelight procession to the Marian shrine on the parish grounds. There, the attendees enjoyed a bonfire before the final blessing.

Grace Barden, 14, a member of the youth group at St. Michael’s Church in Smithfield, said the event overall had been fun and talks she attended on true friendship and the rosary had been inspiring.

“It’s opened my eyes in terms of the faith,” Barden said. “We prayed the rosary around some candles. It was so peaceful.”

Hannah Falcone, 16, another member of the youth group at St. Michael’s Church, said Diocesan Youth Day was a much-needed break from the everyday routine.

“It’s nice to get away from the world and spend some time with God,” Falcone said. “I learned a lot of things about myself and my prayer life, and the importance of spending some time alone with God.”

Joel Perez, 15, a parishioner of the Assumption of the Blessed Virgin Mary Church in Providence, said he found fellowship with other young people who take their Catholic faith seriously.

“Church shouldn’t be an afterthought. It should be something that’s the most important thing in our lives,” Perez said. “We should all try to communicate with God better, like we do with other people.”

Fraga is a correspondent for the Rhode Island Catholic, newspaper of the Diocese of Providence.

PREVIOUS: Suit filed against church in California seeks names of all alleged abusers