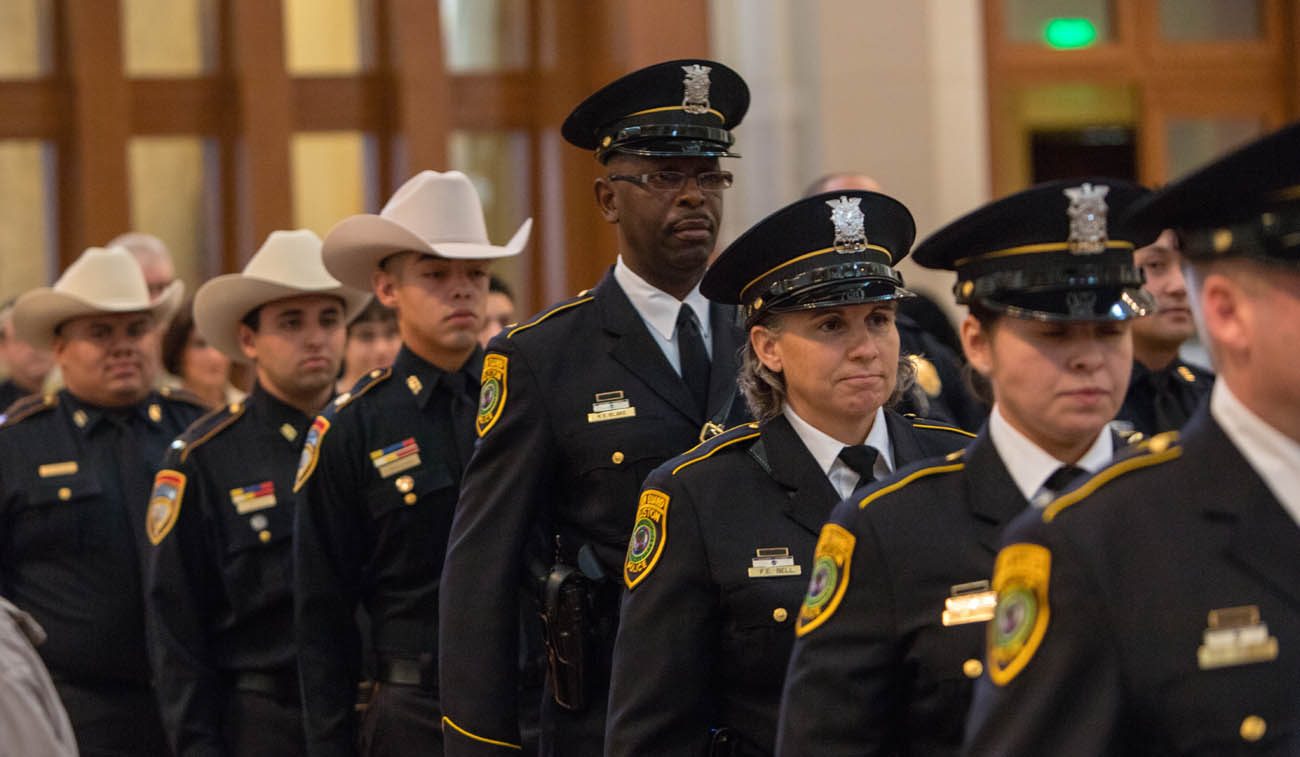 Members of different Galveston-Houston law enforcement agencies and groups process into the Co-Cathedral of the Sacred Heart before the Archdiocesan Blue Mass for Law Enforcement in Houston Sept. 29. The Mass recognizes the work of all members of law enforcement and honors those who died while serving in the line of duty. (CNS photo/James Ramos, Texas Catholic Herald)

HOUSTON (CNS) — A bagpipe blared as Harris County Sheriff Ed Gonzalez led deputies along with police officers from Houston, Santa Fe and other area agencies into the Co-Cathedral of the Sacred Heart of Jesus to celebrate a Blue Mass in honor of men and women in law enforcement.

Local tragic events from fatal shootings at Santa Fe High School in Galveston County to the rescue and recovery efforts from Hurricane Harvey made this year’s Blue Mass ever more appreciative of men and women who are among the first to respond to emergency situations, organizing officials said.

Auxiliary Bishop George A. Sheltz of Galveston-Houston, who celebrated the Sept. 29 Blue Mass, recalled the funeral a year ago at the co-cathedral for Houston Police Sgt. Steve Perez, who drowned trying to report to his command post in the midst of the Hurricane Harvey flooding.

Thousands of uniformed officers from across the country attended the funeral Mass. Cardinal Daniel N. DiNardo and retired Archbishop Joseph A. Fiorenza of Galveston-Houston and other local clergy were the concelebrants. State officials, including Texas Gov. Greg Abbott and Texas Lt. Gov. Dan Patrick also attended.

Bishop Sheltz also referred to retired Houston Police Officer John Barnes, wounded while working security last May 18 when a student fatally shot eight students and two teachers and wounded 10 others before being apprehended.

“You have the awesome responsibility to protect,” said Bishop Sheltz. “Your presence and participation in this Blue Mass … unite you and your service to something bigger than yourself and truly becomes a vocation.”

Deacon Alvin Lovelady, associate director of the Galveston-Houston archdiocesan Office of Correctional Ministries, has a personal reason to thank law enforcement. His wife, Linda, a teacher’s assistant, as well as their daughter, a school bookkeeper, and granddaughter, a graduating senior, survived being at Santa Fe High School the day of the shooting.

“The action of the first responders was immediate and without hesitation as they came to the aid of the students and staff at the high school,” Deacon Lovelady said. “Our community owes these men and women from around our area and beyond a great deal of gratitude.”

“May God be with all first responders always and keep them safe as they work to keep us safe,” he said.

Father Ron Cloutier, who is the director of the Office of Correctional Ministries, said, “I have worked side by side with the Harris County Sheriff’s Office as their chaplain for the past 31 years. I am continuously in awe of what they do and the danger they put themselves in while protecting us.”

“The biggest change I have seen over the years is the enormous challenge that law enforcement has in dealing with mentally ill suspects. The Harris County Jail has one of the largest mental health facilities in the state with more than half the inmates on medication. Our law enforcement is called on daily to be social workers and mental health counselors,” Father Cloutier said.

Before the closing prayer, Bishop Sheltz said a special blessing of protection for the officers and their families. Following the Mass, Bishop Sheltz blessed members of the Houston Police Department Mounted Patrol, K-9 Unit and several law enforcement vehicles.

PREVIOUS: Attendees at Providence youth day grateful to ‘spend some time with God’

NEXT: By helping a mom choose life, woman shows how one person can impact cause