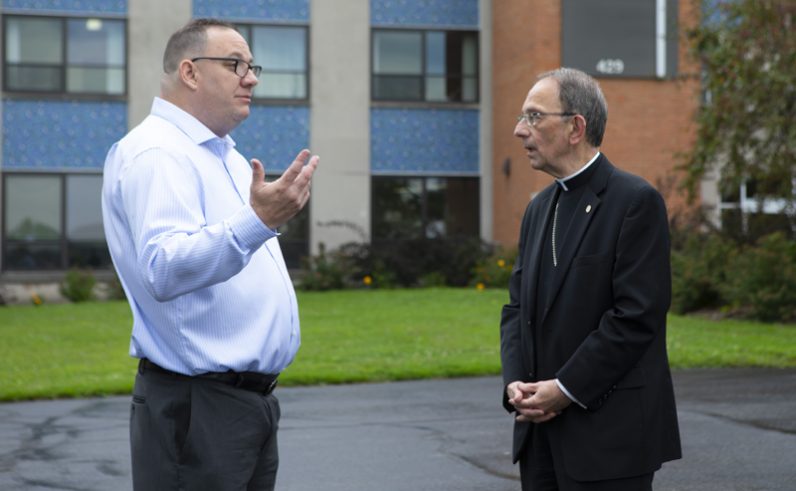 Bishop Lawrence T. Persico of Erie, Pa., speaks with Jim VanSickle of Pittsburgh, who told a Pennsylvania grand jury he was molested by a priest when he was a teenager in Bradford, Pa. VanSickle and the bishop spoke during a late August news conference held in front of the Diocese of Erie’s headquarters by members of the Survivors Network of those Abused by Priests, or SNAP. The U.S. Justice Department has opened its own investigation into Pennsylvania’s Catholic dioceses and clergy sex abuse claims. (CNS photo/Chaz Muth)

WASHINGTON (CNS) — In mid-October when seven Pennsylvania dioceses announced they had been served subpoenas to release confidential files and testimony about allegations of sexual abuse by clergy and other church workers to the federal government, the announcement was big news.

But it was never clear what exactly the government would do with its findings.

On Oct. 23, the eighth diocese, Altoona-Johnstown, also confirmed it had received federal subpoenas, and, like the other Pennsylvania dioceses, said it would cooperate fully with the investigation.

But questions about what this will mean for the Pennsylvania dioceses or if this type of investigation will move to other states remain unanswered since neither the Justice Department nor the Eastern District of Pennsylvania, which issued the subpoenas, have spoken about it.

This leaves plenty of room for speculation.

From the get-go, since the subpoenas asked for evidence that Catholic clergy or church workers may have transported children across state lines for illicit purposes or shared child pornography online or electronically, one theory is that the investigation will likely examine the Catholic Church under the lens of the Racketeer Influenced and Corrupt Organizations Act, or RICO, a 1970 law originally designed to target organized crime.

Some stipulate that getting enough evidence to make a RICO case against the Catholic Church would be hard to do.

Marci Hamilton, a University of Pennsylvania professor who also runs Child USA, a group that advocates for victims of child sex abuse, told National Public Radio that using RICO “as a weapon against the church would be a stretch” since most cases involve financial crimes.

She said the federal statute called the Mann Act, which prohibits moving people across state lines for the purpose of illegal sex acts, could be more successful.

In Catholic News Service stories, RICO most often comes up about the legal debate over anti-abortion protests. In 2005, the Supreme Court ruled that protesters’ actions did not fit the federal definition of extortion that was the basis for the RICO lawsuit against them.

But the law has been used before in sex abuse cases with the church.

The first time it was used was in 1993 in a class action lawsuit against a priest accused of sexually abusing teenagers and taking them across state lines to be abused by another priest in Rhode Island. The case was settled for an undisclosed amount.

That suit and similar lawsuits using racketeering laws against priests in clergy abuse cases have failed.

The Survivors Network of those Abused by Priests, which asked the Department of Justice in 2003 to investigate the Catholic Church, sent an Aug. 15 letter this year to Deputy Attorney General Rod Rosenstein, once again asking for a “full-scale, nationwide investigation into the systemic rape and sexual violence, and cover-ups by the Catholic Church.” The letter said there were a number of ways to proceed including RICO.

David Hickton, a former U.S. attorney in the Western District of Pennsylvania, also is quite familiar with RICO. Two years ago, he initiated a civil lawsuit against the Diocese of Altoona-Johnstown under RICO after the attorney general issued a report on widespread clergy sex abuse in the diocese.

The diocese agreed to a settlement with federal prosecutors in the case, but Hickton, currently a law professor at University of Pittsburgh Law School, is still thinking about what could have happened.

He told the news website, Pennlive.com, in early September that he wondered why prosecutors and victims haven’t tapped into RICO.

“Everybody keeps talking about the need for legislation to open up the statute of limitations, but I identify the civil RICO as a definite way to get redress for victims,” he said.

As Hickton, who is Catholic, sees it, Catholic dioceses easily meet RICO criteria, fitting the definition of an enterprise. He also said victims of clergy sexual abuse could argue that an alleged cover-up of abuse and protection of predatory priests, sometimes across state lines, could amount to obstruction of justice and a violation of civil conspiracy laws.

Whatever path the federal investigation takes, with or without RICO, it is likely to have more teeth than the Pennsylvania grand jury report issued in August.

Although the report detailed claims of sexual abuse of more than 1,000 children by more than 300 Catholic priests and other church workers, only two of the accused priests were prosecuted because many of them had either died or the state’s statute of limitations had run out.

This fueled the state’s legislators in Pennsylvania to continue their efforts already in motion for the past two years on the statute of limitations. The House passed a bill which would allow retroactive civil lawsuits to be brought for up to two years, but the Senate did not bring up the bill for a vote Oct. 17, the last day of its session.

The bill’s opponents, including the Pennsylvania Catholic Conference, have claimed that a window allowing lawsuits to look decades into the past against perpetrators who may be deceased is unjust, possibly unconstitutional and would lead to the bankruptcy of Catholic dioceses.

Although this bill has reached a standstill over its retroactive provisions regarding cases decades in the past, there are other statewide efforts to trim or do away with statues of limitations in child sexual abuse cases going forward.

There also are numerous ongoing investigations at state levels on clergy sexual abuse. To date, 13 states and the District of Columbia have announced their own investigations into church records. These states are: Missouri, New York, New Jersey, Kentucky, Illinois, New Mexico, Nebraska, Wyoming, Vermont, Maryland, Florida, Michigan and Virginia.

PREVIOUS: Head of U.S. bishops condemns shooting at synagogue, all ‘acts of hate’