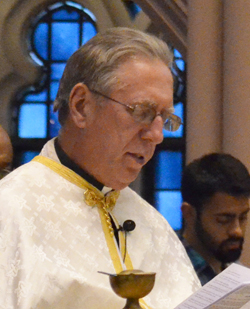 Father Basil Hutsko, pastor of St. Michael Byzantine Catholic Church in Merrillville, Ind., is seen during a healing service in 2016 at the Cathedral of Holy Angels in Gary. (CNS photo/Northwest Indiana Catholic)

MERRILLVILLE, Ind. (CNS) — A priest who said he was attacked by an unknown assailant in the sacristy at St. Michael Byzantine Catholic Church in Merrillville has been placed on administrative leave because an abuse claim against him from decades ago has been determined to be credible.

In a statement, the Byzantine Ruthenian Eparchy of Parma in Ohio said Father Basil Hutsko, 64, was placed on administrative leave from St. Michael “in response to a credible accusation of sexual misconduct involving a minor that allegedly occurred 35 years or longer ago.

When the woman first came forward, in 2004, the eparchy said it promptly investigated the allegations, with the assistance of a retired FBI agent.” An independent review board concluded on the basis of that investigation that the allegations were not substantiated due to insufficient evidence.

The Chicago Tribune reported Oct. 24 that church officials were presented with new facts in the case and after reviewing them, determined the claim is credible. Father Hutsko denies the allegation; his priestly faculties have been suspended.

“The Eparchy of Parma is committed to protecting children and helping to heal victims of abuse. We are deeply sorry for the pain suffered by survivors of abuse due to actions of some members of the clergy,” the statement said.

In August, Father Hutsko claimed he was assaulted as he prepared to celebrate morning Divine Liturgy. He said his assailant came up behind him, threw him to the ground and beat his head against the sacristy floor. The priest reportedly lost consciousness and never saw his assailant.

Father Hutsko told investigators at the time his alleged attacker said, “This is for all the kids,” seemed like a reference to the abuse crisis in the church.

The Merrillville Police Department classified the attack as a hate crime and referred the case to the FBI, which conducted an investigation. No suspects were ever arrested and the Tribune reported that law enforcement has now determined the attack never happened.

NEXT: Custom of dressing up for Halloween ‘devotional in spirit,’ says bishop