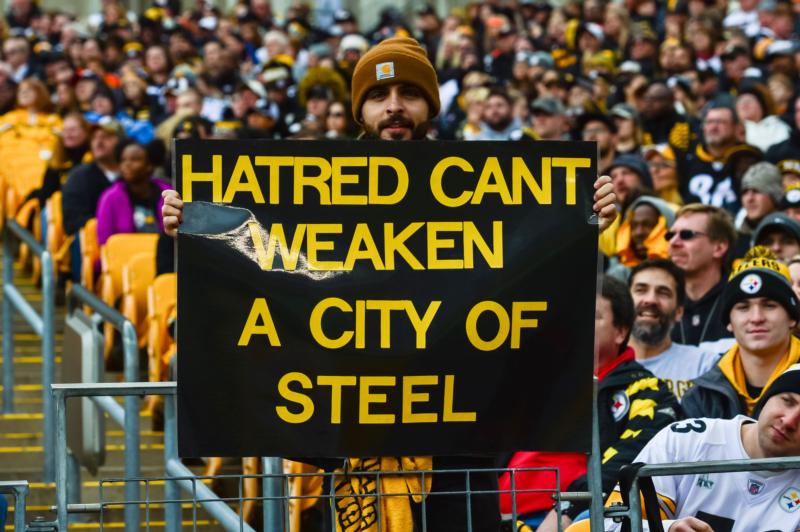 A Pittsburgh Steelers fan displays a sign Oct. 28 to honor the victims of the shooting at the Tree of Life Synagogue before the game between Pittsburgh and the Cleveland Browns at Heinz Field in Pittsburgh. At least 11 people were killed and six others wounded, including four police officers, during the Oct. 27 shooting at the synagogue. (CNS photo/Jeffrey Becker, USA TODAY Sports via Reuters)

PITTSBURGH (CNS) — Thousands of people gathered outside and inside the Sailors and Soldiers Memorial Hall of the University of Pittsburgh Oct. 28 at an interfaith service to mourn the victims of the horrific shooting a day earlier at the Tree of Life synagogue.

A Baptist gospel choir opened the service, which was organized under the banner “Stronger Together.” Christian and Muslim clergy were among those who made remarks, but the leaders of the service were rabbis representing the three Jewish congregations who used the synagogue.

Rabbi Jeffrey Myers called on political leaders, starting with “those in the room,” to help put an end to hate speech.

Rabbi Jonathan Perlman, described as choking back tears, said: “What happened yesterday will not break us. It will not ruin us. We will continue to thrive and sing and worship and learn together and continue our historic legacy in the city with the friendliest people that I know.”

That same day and in the days that have followed, a cascade of interfaith services have been held in cities large and small around the country to mourn the loss of life in what is being called the worst attack on a synagogue in U.S. history.

“All of Pennsylvania stands with the victims and their families,” Pennsylvania Gov. Tom Wolf tweeted Oct. 29 as the state Capitol was lit in tribute to the victims. “We join the Pittsburgh Jewish community and Jewish Americans across our nation in mourning.”

The funerals for the deceased also have begun. Reuters reported that nearly 2,000 mourners from across the United States came Oct. 30 to offer condolences to relatives of David Rosenthal, 54, and Cecil Rosenthal, 59, at the Rodef Shalom synagogue in Pittsburgh as police officers stood outside. 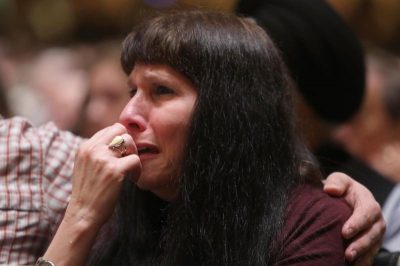 A woman cries during a memorial service at the Sailors and Soldiers Memorial Hall of the University of Pittsburgh Oct. 28, a day after a deadly shooting the Tree of Life Synagogue in Pittsburgh. (CNS photo/Cathal McNaughton, Reuters)

Besides the Rosenthals, who were brothers, those who died were: a husband and wife, Sylvan and Bernice Simon, ages 86 and 84; Joyce Fienberg, 75; Richard Gottfried, 65; Rose Mallinger, 97; Jerry Rabinowitz, 66; Daniel Stein, 71; Melvin Wax, 88; and Irving Younger, 69. Six others were injured, including four police officers.

Outside the synagogue hundreds have paid their respects to the dead at a makeshift memorial made with stars of David, each bearing the name of a victim.

A 46-year-old Pittsburgh man, Robert Bowers, is accused of the shooting. He allegedly shouted that “all Jews must die” before entering the synagogue in the Squirrel Hill section of the city and opening fire. Police said he was armed with three handguns and an AR-15 “style” weapon. He is believed to have acted alone.

Bowers was apprehended after a shootout with police. He was hospitalized and treated for his injuries. The night of Oct. 27, he was formally taken into federal custody. He has been charged with 29 separate federal crimes, including hate crimes and weapons offenses. He appeared before a federal magistrate Oct. 29 to hear the charges against him. Bowers is being held without bail.

An outpouring of sympathy for the synagogue’s community and the city of Pittsburgh has come from religious leaders of all faiths, plus a pledge to join together to fight anti-Semitism, attacks on any religion and hatred directed to any group in the U.S., and to address gun violence in this country.

Catholic leaders were quick to condemn the shooting massacre, offer prayers and condolences for the victims and call for efforts to end gun violence. Statements came from, among others, Cardinal Daniel N. DiNardo of Galveston-Houston, president of the U.S. bishops’ conference, and Pittsburgh Bishop David A. Zubik.

Boston Cardinal Sean P. O’Malley said that Catholics joined with the Jewish people in a commitment “to building a civilization of love to combat the hatred, violence and anti-Semitism in our world.”

Chicago Cardinal Blase J. Cupich joined his voice in condemning “in the strongest terms this anti-Semitic act of depravity and the rhetoric, heartlessness and apathy that have allowed hatred to flourish in our society.

“Make no mistake. Words incubate evil and allow it space to be accepted. Words that give voice to fear mongering that causes people to arm themselves against anyone who is ‘other,'” he said. “And it will take more than words to stop this predictable maelstrom of hostility and violence that threatens to change our nation.”

In Philadelphia, Archbishop Charles J. Chaput said in a statement that religious and ethnic hatred “is vile in any form, but the ugly record of the last century is a lesson in the special evil of anti-Semitism. That evil has not been stamped out. Rather, it has been resurgent in many areas of the world for the last several decades.  It has no place in America, and especially in the hearts of Christians.

“I want to express the heartfelt support and prayers of Philadelphia’s Catholic community, and my own, for the victims of the Pittsburgh synagogue attack and their families. May God give them courage and solace, and may this be a statewide wake-up call to resist religious hatred,” the archbishop said.

Among other Catholic leaders weighing on the tragedy were the Sisters of Bon Secours.

“As women of healing, we hold fast to the belief that the power of love is stronger than the power of hate,” the religious congregation said in an Oct. 30 statement released from its headquarters in Marriottsville, Maryland.

“In this spirit of love, we commit ourselves to actively promote a culture of Gospel nonviolence in our own lives and to bring a healing presence in those divisive situations in which we find ourselves,” the statement said.

It added: “We stand in solidarity with all those who continue to press Congress to enact legislation on gun safety and with those who advocate for support services needed by those who suffer from emotional, psychological and mental health challenges.” 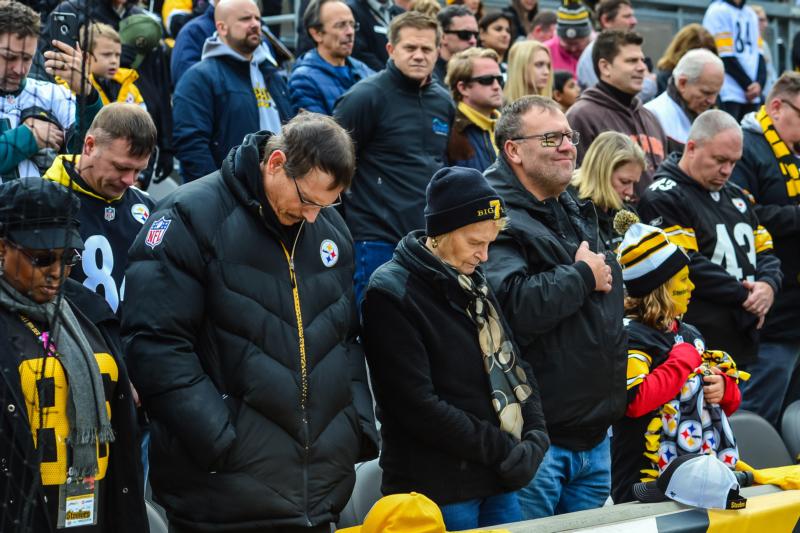 Pittsburgh Steelers fans bow their head for a moment of silence Oct. 29 to honor the victims of the shooting at the Tree of Life Synagogue before the game between Pittsburgh and the Cleveland Browns at Heinz Field in Pittsburgh. (CNS photo/Jeffrey Becker, USA TODAY Sports via Reuters)