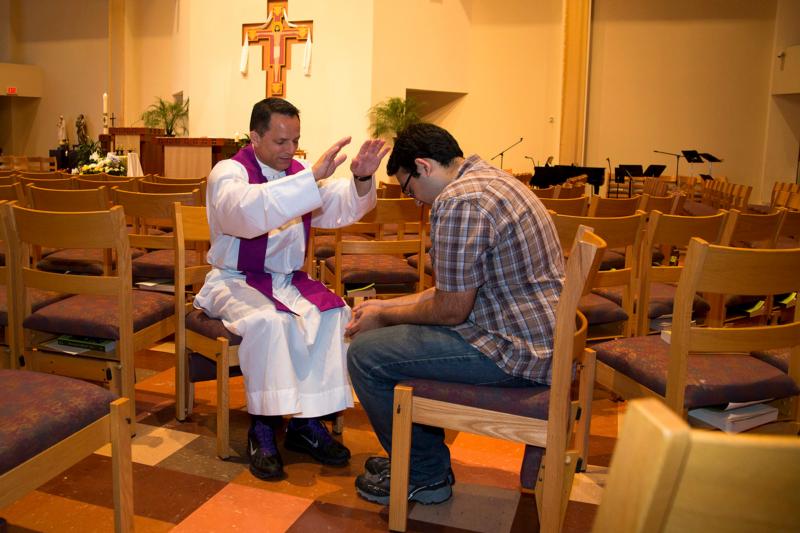 In this 2015 file photo, a priest blesses a FOCUS student at a church on the campus of University of Texas at Austin at the University Catholic Center. (CNS photo/courtesy FOCUS)

In this 2015 file photo, a priest blesses a FOCUS student at a church on the campus of University of Texas at Austin at the University Catholic Center. (CNS photo/courtesy FOCUS)

It also called for more uniform certification standards as well as closer collaboration for campus ministers who operate under different models.

The report, “A National Study on Catholic Campus Ministry 2017,” was issued Oct. 9 by the U.S. bishops’ Secretariat on Catholic Education.

“The (federal) Department of Education reports there are more than 3,000 four-year colleges and universities in the United States. The Catholic Church has a pastoral presence at approximately 1 in 4 four-year institutions,” the study said. “With the Department of Education data reporting 1,500 community colleges, the Catholic Church’s pastoral presence drops to 1 in 60 for community colleges.”

The community college gap is a “significant absence,” said Barbara Humphrey McCrabb, assistant director for higher education in the secretariat. “It becomes even more significant if you look at (theologian) Hoffsman Ospino and his work with Hispanics in higher education.

“Forty-eight percent of Hispanics who attend college do so at a community college. If we as church are arguing that, given the Fifth Encuentro … that we want to better engage Latinos, campus ministry is a great way to do that, but we’re not where they are,” she told Catholic News Service.

“The commendable strengths to missionary-based ministry — personal holiness and intimacy with God — reveals a growing edge for degree-formed ministers. If ministers grant lesser importance to these vertical elements of their relationship with God, students may fail to connect their social action or civic engagement to the Christian love that propels these. It risks diminishing personal piety and obscuring the theological meaning to good works; students may ‘do good’ without being spiritually formed by the experience,” the report said.

“However, in not seeing the potential for spiritual growth through acts of mercy, solidarity and friendship with those in need or students from other faith traditions, missionary-based ministers can miss the horizontal aspects of Catholic life. This risks cultivating a faith that — while tuned-in to one’s personal sins, graces and relationship with God — misses much of the relationship of oneself to neighbor and creation,” it added.

“Because these two styles are not often found on the same campus, cooperation and learning from each other must be intentionally fostered for the collective common good of campus ministry.”

Revised certification procedures was one of the recommendations in the report. So was the first review and updating of the national standards for Catholic campus ministry by the Catholic Campus Ministry Association.

McCrabb said two working groups have been established to act on those recommendations. One is working on the national standards, and should complete its work by the end of the year. Participants are, she said, “a mixture of experienced campus ministers, FOCUS missionaries, and other groups — like the hospital chaplains” who have national standards of their own.

The Catholic Campus Ministry Association, she added, is the organization that certifies campus ministers on behalf of the U.S. bishops.

“It’ll help in their reapplication for being the body that certifies,” McCrabb said.

In a survey of campus ministers conducted for the study, at least 80 percent of those surveyed said their preparation areas included living a moral life in accordance with church teachings; a lifelong relationship with Jesus; being compassionate toward those on the margins, giving witness to their Catholic faith; living a just life in accordance with Catholic social teaching; being active participants in a parish; discerning a religious vocation; and facing challenges to the faith such as secularism, materialism and relativism.

The second working group, on resetting certification procedures, is a similarly diverse group, according to McCrabb. Its work is expected to be completed by the end of the college academic year.

It will have some issues to work out. One of them is the current certification requirement, which includes being a campus minister for two years.

“Of all the campus ministers, 540 of them are FOCUS missionaries” who are on two-year mission assignments, McCrabb said. “None of the missionaries are certified because by the time they become eligible, they are no longer doing campus ministry.

“The study has allowed us to begin conversations with FOCUS about what they do in their training and preparation for folks, but how do we bring that in alignment with the (Catholic bishops’) conference’s expectation?”

A third recommendation is for more diversity among campus ministers themselves. According to the study, 86 percent of those currently in the field are Caucasian. At a three-day symposium in 2017 as part of the study process, “participants suggested creating a diversity initiative to pursue ways of cultivating intercultural competence and greater pastoral engagement of diverse populations on campus. to outline,” the report said.

A fourth recommendation was to find ways to offer campus ministry at more community colleges.

NEXT: Diocese moving from prayer to action in wake of Hurricane Michael