Diocese moving from prayer to action in wake of Hurricane Michael 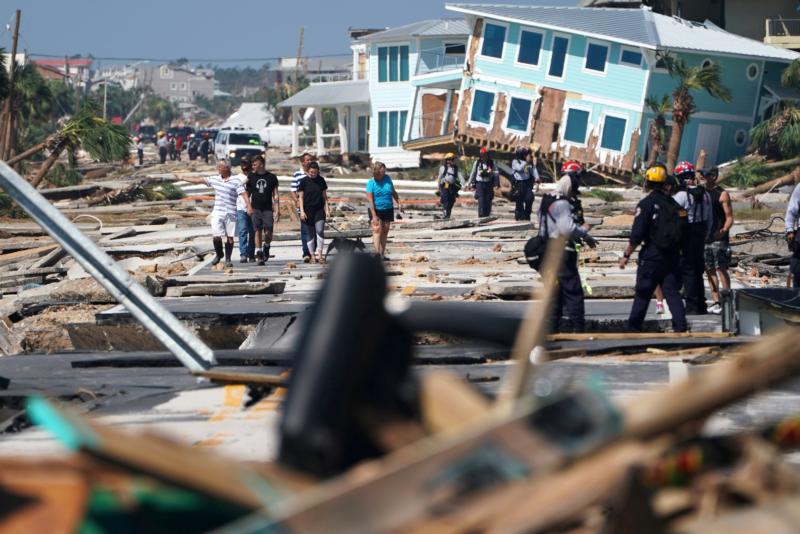 First responders and residents walk amid debris and destroyed homes Oct. 11 after Hurricane Michael swept through Mexico Beach, Fla. The Category 4 storm raged through the Florida Panhandle into Georgia Oct. 10 as the most powerful storm to hit the continental United States in decades, turning homes into piles of lumber and flooding subdivisions. (CNS photo/Carlo Allegri, Reuters)

UPDATED – PENSACOLA, Fla. (CNS) — In the wake of Hurricane Michael, which ravaged the Florida panhandle, the Diocese of Pensacola-Tallahassee, whose territory was smack in the path of the Category 4 storm, has moved from prayer to action.

The diocesan website still urged prayer for the hurricane’s victims, quoting two verses from Psalm 107, and also is encouraging people to donate much-needed items to those whose lives were upended by Michael.

In conjunction with Catholic Charities of Northwest Florida, the diocese is accepting cash donations here.

Goods urgently needed include water, tarps, nonperishable food items, cleaning supplies and gloves, pet supplies, and baby food and diapers. The diocesan pastoral center in Pensacola was accepting these items through Oct. 15, while St. Mary Church in Fort Walton Beach was conducting a weekend collection for those items Oct. 13-14

“So many people have lost everything: homes, property and even their livelihood. The scenes of destruction are heart-wrenching, knowing that when we see a place where there once was a house, a family used to live there and are now homeless,” Bishop William A. Wack of Pensacola-Tallahassee said in an Oct. 12 letter to the diocese.

He said the priests and employees of the diocese have been accounted for and “personal injury seems to have been kept to a minimum given the size of the storm.” Some church buildings, parish halls, rectories, schools and other buildings may be a total loss, but the damage was still being assessed, he added.

Insurance will help with the rebuilding but it will be a long-term recovery project, Bishop Wack said. “But I know that we will come together and do what we need to pull through this.”

He asked those who are able to donate supplies or funds to help with the recovery. In the meantime, the bishop said, the diocese was working hard to arrange temporary places to celebrate the upcoming weekend Masses to accommodate parishioners whose church buildings are lost or have been deemed unsafe. “Obviously, if it is not safe — or possible — to attend Mass on a Sunday, you are not obligated to go. Your safety is most important,” Bishop Wack said.

Hurricane Michael retained hurricane-force winds up to 200 miles inland as it tore through Georgia before dumping heavy, windy rains onto North and South Carolina and part of southern Virginia before heading back out to the Atlantic Ocean.

Seven of the deaths were in Virginia, which Gov. Ralph Northam declared a disaster area before the storm hit. One firefighter died while on an emergency call, while the others had reportedly drowned.

Four deaths occurred in one Florida county, including a man who was killed when a tree crashed through his home. An 11-year-old Georgia girl was killed when the hurricane’s high winds tore away a carport and sent it smashing into a modular home where the girl was visiting her grandparents.

An early estimate of losses from the hurricane was set at $4.5 billion by CoreLogic, based on the replacement cost of the houses and other building that would be in the storm’s path. The company’s numbers do not include flood damage.

Catholic Charities USA is a member of National Voluntary Organizations Active in Disaster, and is a “trusted source” by the Federal Emergency Management Administration, where people can make contributions. The homepage of its website, https://www.catholiccharitiesusa.org, has a link to make donations to assist hurricane victims.

It is the first time on record that a hurricane of this intensity had hit the Florida panhandle. Those who surveyed the damage to the towns in Michael’s path said the destruction appeared to them to be more like that from a tornado, as building after building had been flattened.

While a Florida military base in the hurricane’s trajectory was evacuated and its planes flown hundreds of miles away, prisoners were not evacuated, and many of the region’s poor people found they had nowhere to go until it was too late to get out.

The hurricane rose in intensity quickly before hitting landfall Oct. 10. Those who stayed behind may have expected Michael to remain a tropical depression. However, fueled by abnormally warm water in the Gulf of Mexico, it rose from a tropical depression to a Category 2 hurricane Oct. 9, before gaining Category 4 status early Oct. 10.

In separate statements Oct. 13, Cardinal Daniel N. Dinardo of Galveston Houston and Bishop Frank J. Dewane of Venice called for prayers for the victims of Hurricane Michael and for generosity in donations of food and material goods to assist those whose homes and livelihoods have been devastated by the storm.

The cardinal is president of the U.S. Conference of Catholic bishops and Bishop Dewane is chairman of the USCCB domestic policy committee.

“As the impact of Hurricane Michael becomes clearer, we will work closely with local dioceses, Catholic relief entities and with other organizations to assess the needs on the ground and offer assistance,” said Bishop Dewane.

He also called on U.S. Catholics to pray for recovery efforts for “our brothers and sisters in Nicaragua, El Salvador, Honduras and Cuba,” also impacted by Michael.

As the hurricane neared, the Pensacola-Tallahassee Diocese posted a prayer to St. Michael on its website.

“St. Michael the Archangel, defend us in battle; be our safeguard against the wickedness and snares of the devil,” the prayer says. “May God rebuke him, we humbly pray: and you, O prince of the heavenly hosts, by the power of God, cast down to hell Satan and the other evil spirits, who prowl through the world for the ruin of souls. Amen.”

In his Oct. 12 letter, Bishop Wack told the faithful of his diocese: “Please know that you are in my prayers. I am asking that St. Michael the Archangel — co-patron of our diocese — intercede for us and help us in this critical time.”

He added: “This is God’s church and he will make it possible for us to continue to practice our faith, serve one another and serve him.”

Like Pensacola-Tallahassee, early on the Diocese of Venice, well south of the storm, had posted a “Hurricane Prayer” on its diocesan website, which then migrated to Twitter and was retweeted.

“O God, master of this passing world, hear the humble voices of your children. The Sea of Galilee obeyed your order and returned to its former quietude. You are still the Master of land and sea,” the prayer begins.

“We live in the shadow of a danger over which we have no control: the Gulf, like a provoked and angry giant, can awake from its seeming lethargy, overstep its conventional boundaries, invade our land, and spread chaos and disaster. During this hurricane season we turn to you, O loving Father,” it says.

“Spare us from past tragedies whose memories are still so vivid and whose wounds seem to refuse to heal with passing of time. O Virgin, Star of the Sea, our beloved Mother, we ask you to plead with your Son on our behalf, so that spared from the calamities common to this area and animated with a true spirit of gratitude, we will walk in the footsteps of your Divine Son to reach the heavenly Jerusalem, where a stormless eternity awaits us. Amen.”

NEXT: Cardinal Wuerl led high-profile endeavors in 32 years as a bishop