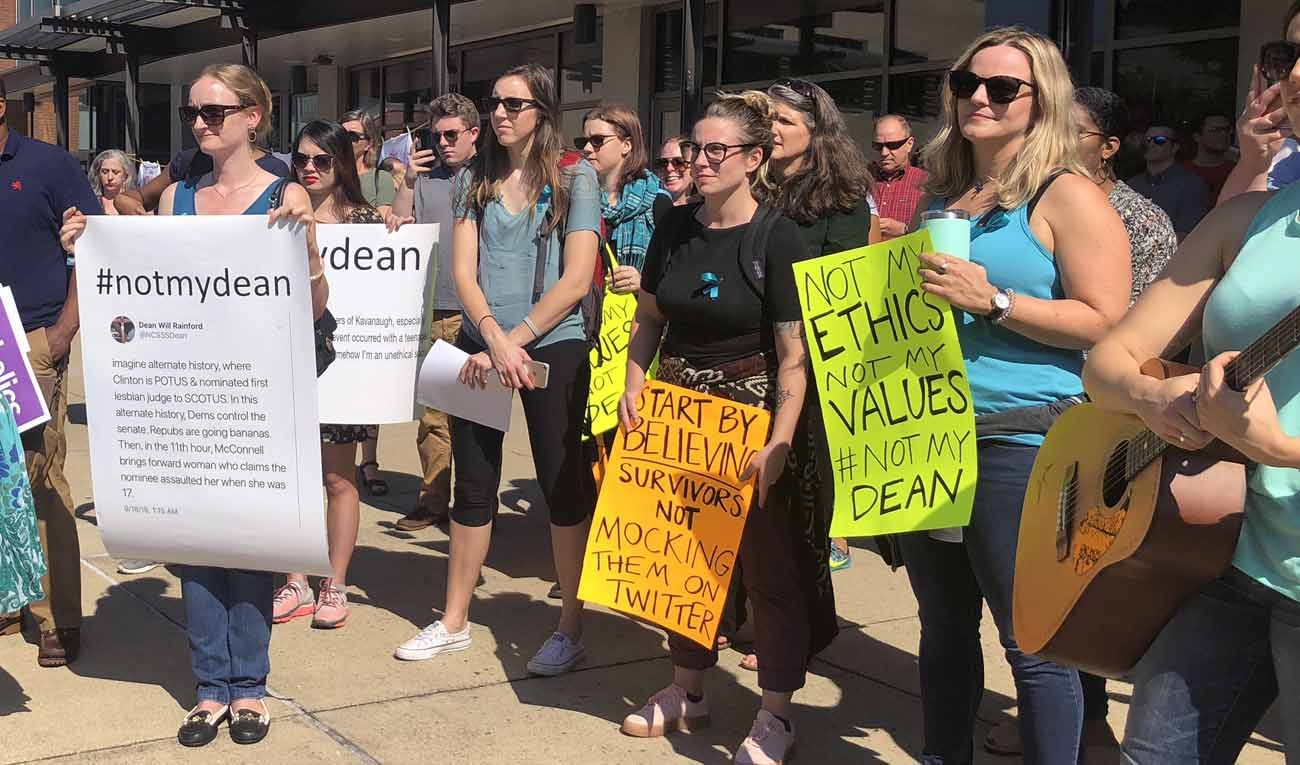 Students, alumni and faculty members at The Catholic University of America in Washington gather outside the student commons Oct. 1 to call for the resignation of the dean of the school of social work following a series of tweets he wrote criticizing women who accused embattled Supreme Court nominee Brett Kavanaugh of sexual misconduct. John Garvey, university president, Sept. 28 suspended Will Rainford, dean of the National Catholic School of Social Service, after the comments. (CNS photo/Rhina Guidos)

UPDATED – WASHINGTON (CNS) — Some students, alumni and faculty members at The Catholic University of America in Washington are calling for the resignation of the dean of its National Catholic School of Social Service following a series of tweets he wrote criticizing women who accused embattled Supreme Court nominee Judge Brett Kavanaugh of sexual misconduct.

Even though John Garvey, the university’s president, announced Sept. 28 that he was suspending Will Rainford after he made comments on an official university Twitter account about women who spoke of past alleged inappropriate behavior or abuse by Kavanaugh, a group of about 100 protesters at the school Oct. 1 said an apology and a suspension are not enough.

After protesting outside the main student center, they marched to Garvey’s office to deliver a letter demanding that Rainford be fired.

Rainford used the Twitter handle @NCSSSDean, his official account as the dean of the school of social work, comment Sept. 26 about a woman who said she was at a party with Kavanaugh in high school where she witnessed inappropriate behavior. Their age difference, she was a senior and he a freshman when the alleged incident took place, would make her the “perp” and he the “victim” in another universe, Rainford wrote.

In another tweet, he cast doubt on Christine Blasey Ford, who in testimony before the Senate Judiciary Committee Sept. 27 alleged that Kavanaugh had sexually assaulted her when they were teens — charges that he denies.

As a result of the dean’s tweets, the National Center on Sexual Exploitation, which was supposed to be holding a symposium on campus Oct. 9 and 10, along with the university’s school of social work, told participants in an Oct. 2 email that it was postponing the event because of the “insensitive and inappropriate tweets made by the dean of the School of Social Service at Catholic University.”

“We find it necessary to suspend this event as the school of social service handles these matters,” said Dawn Hawkins, the center’s vice president and executive director in an email to those registered.

“It is our view that such a political climate makes moving forward with the symposium, in a way which ensures that the nuance of the issues can be discussed and not misconstrued or conflated with unfolding political agendas, nearly impossible,” Hawkins continued in the email.

Rainford has apologized for his tweet. In an open letter to the university, he stated that “my tweet suggested that she was not a victim of sexual assault. I offer no excuse. It was impulsive and thoughtless and I apologize.”

Protesters magnified several of Rainford’s tweets and held them up on poster boards outside the university’s main student commons as others spoke of their abuse or how he wasn’t following what they had been taught as social workers at the school.

Some, like student Nora Schauble, who is set to graduate next spring from the school of social work and took part in the event, said Rainford’s views are not in keeping with Catholic social teaching that the program espouses. Some alumni who showed up said the tweets also do not show a person who has a grasp on the tenets of the dignity of the human person that they learned at the school.

The Twitter account Rainford used to make the comments has been deleted but screen captures of the posts have remained in circulation.

In his statement announcing Rainford’s suspension as dean “for the remainder of the semester,” Garvey said he had heard from the school’s professors, alumni and students and their concern about the comments.

“Of deepest concern to me is that they demonstrated a lack of sensitivity to the victim,” Garvey wrote in the statement explaining the suspension, adding that the university has “no position” on the Kavanaugh “matter.”

Garvey said the tweets were “unacceptable” but said he wished that Rainford would “continue to lead the school.”

Ellen McSweeney, a second-year student at the school of social work, said that even though students don’t have much time in their schedules, many showed up to deliver an important message, that an apology and a suspension just won’t do this time.

“We made time for this, to say this is not OK with us,” she told the crowd.

NEXT: Calif. governor vetoes bill to extend statute of limitations