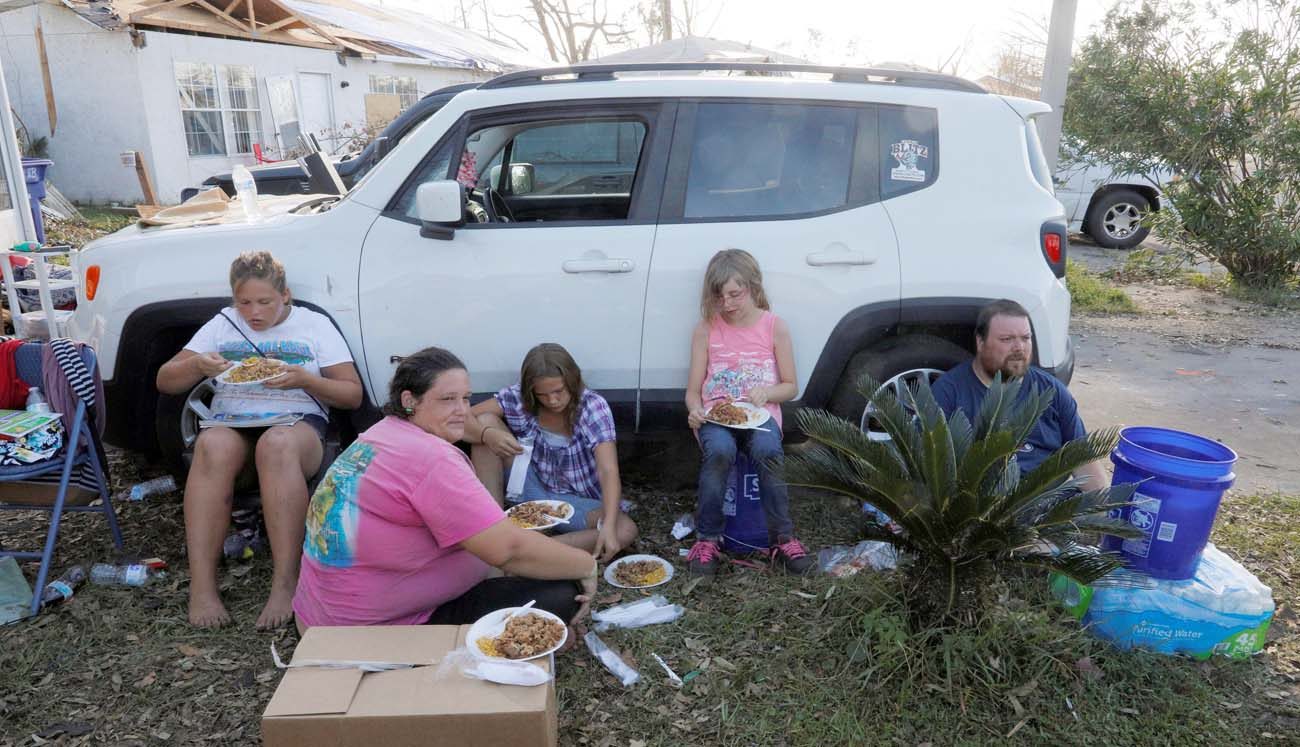 The Lachance family eats a hot meal prepared by Operation BBQ Relief and distributed by members of 50 Star Search and Rescue outside their damaged home Oct. 16 in the aftermath of Hurricane Michael in Panama City, Fla. The hurricane killed at least 16 people in Florida, most of them in the coastal county that took a direct hit from the storm, state emergency authorities said. That's in addition to at least 10 deaths elsewhere across the South. (CNS photo/Brian Snyder, Reuters)

MIAMI (CNS) — The physical impact of Hurricane Michael and the anticipated recovery period for parts of the Florida Panhandle appear to be on a scale of last year’s Hurricane Maria in Puerto Rico and the Virgin Islands, according to the church’s top emergency management specialist in Florida.

“The devastation is so large that we looking at couple of years at least in recovery,” said Gabe Tischler, who is working full time on the Hurricane Michael response for the Tallahassee-based Florida Catholic Conference following the storm’s Oct. 10 landfall.

The event brought near Category-5 strength winds when it came ashore at Mexico Beach, Florida, near Panama City in the Florida Gulf Coast.

“Every parish and rectory in the hurricane zone has suffered damage, and we are working to get RV units in place so the clergy can move out of the damaged rectories,” said Tischler.

As a resident of Tallahassee, he had to evacuate his residence and is now working remotely coordinating relief and volunteer efforts from regional dioceses, private individuals and corporate donors and state and federal authorities along with Catholic Charities agencies.

Scarcity of lodging and housing — both for residents and emergency responders pouring into the region — are among the most daunting needs of the recovery efforts, he said, noting that emergency supply distribution centers have been set up or created at Catholic parishes in Florida Panhandle coastal towns of Panama City, Mexico Beach, Marianna, Apalachicola and Port St. Joe.

To date, Catholic Charities of Northwest Florida has distributed an estimated million pounds of goods to 8,000 recipients at a distribution site at St. Dominic Parish in Panama City, considered part of the storm’s ground zero.

Portable toilets, satellite phones, portable laundry facilities and a communications vehicle are among the larger items arriving through private donors and church agencies. Cellphone communications has been nonexistent around the hardest-hit areas but that situation is expected to improve in the near future.

The Diocese of Pensacola-Tallahassee in collaboration with Catholic Charities of Northwest Florida has put out an online call for volunteers, noting that two-thirds of that diocese was substantial impacted by Hurricane Michael.

The website notes that there is a need for at least 50 volunteers, seven days a week for the next few months at a Catholic Charities staging project at St. Dominic Church. Many of the volunteers are staying at their own cost at area hotels and church facilities in the Tallahassee area, organizers said.

In addition, Catholic Charities USA has deployed a small team to the region, with several staff operating a portable laundry facility in Marianna, and another team that will deliver supplies and power generators to Panama City. The Knights of Columbus and individual Charities agencies around the region have also been mobilized to collection donations and send volunteers, Tischler said.

“So many people have lost everything: homes, property and even their livelihood. The scenes of destruction are heart-wrenching, knowing that when we see a place where there once was a house, a family used to live there and are now homeless,” Bishop William A. Wack of Pensacola-Tallahassee said in an Oct. 12 letter to the diocese.

In the Miami Archdiocese, Catholic Charities was sending an initial team of four logistics and fact-finding staff on Oct. 17 to spend several days there helping to establish the distribution site in St. Joe, according to Peter Routsis-Arroyo, CEO of Catholic Charities Miami.

The Miami team planned to be based at the St. John Neumann Retreat Center in Tallahassee through Oct. 21, when another Catholic Charities team from Central Florida was expected to relieve them the following week.

“Later on they may have some specific needs up there as far as case workers or clinical social workers but this first go-round is mostly about assessment,” Routsis-Arroyo said, who is formerly Catholic Charities director for the Diocese of Venice in Southwest Florida, which experienced damages from last year’s Hurricane Irma.

“You have a lot of shrimpers and rural poor in that area (of Port St. Joe), and that is where they asked us to help out. They do have two sites up and running: one in Mexico Beach, which is ground zero, and one in Panama City, which was destroyed also. We were asked to take the easternmost area (of impact),” Routsis-Arroyo added. A team from Catholic Charities Orlando is expected to assist in this area next week.