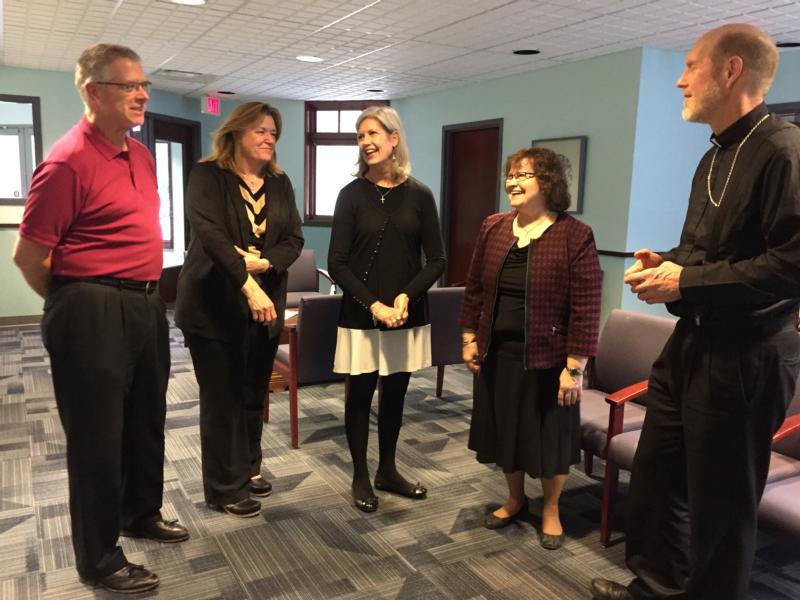 Bishop Thomas R. Zinkula of of Davenport, Iowa, right, talks with pro-life advocates inside the Life & Family Medical Clinic in late September in Bettendorf, Iowa. From left are; Dr. Tim Millea, Mary Jones, Beth Millea and Linda Rubey, executive director of the Women’s Choice Center in Bettendorf, which shares the building with the medical clinic expected to open in early 2019. (CNS photo/Barb Arland-Fye, The Catholic Messenger)

BETTENDORF, Iowa (CNS) — Before Planned Parenthood of the Heartland opened its Bettendorf clinic in 1999, pro-life advocates prayed fervently against construction of the facility and dropped religious medals into the earth on which it would be built.

For the next two decades, they prayed unceasingly for closure of the clinic where abortions were performed.

Prayers have been answered in what pro-life advocates call “The miracle on Happy Joe Drive.” The Planned Parenthood building where unborn babies’ lives were ended has been cleansed, cleaned and transformed into a faith-centered primary care clinic and a pregnancy support and resources center.

While helping to paint the building’s interior in calming cool colors, a painter told someone that she felt a sense of peace. Twenty years earlier, she had traveled to an abortion provider elsewhere but decided against having an abortion. She is grateful to be a mother to a young adult she chose to give birth to and nurture, pro-life advocates said.

The figure-eight-shaped building that was Planned Parenthood now is home to Life & Family Medical Clinic, a faith-centered primary care clinic, and the Women’s Choice Center, which provides support for pregnant women, new parents and their families. Both are pro-life ministries of Life & Family Educational Trust. Board members anticipate opening the new, direct primary care medical clinic in early 2019.

Other clinics in Iowa provide direct services to members who pay a monthly fee, but this one will be unique in following the “Ethical and Religious Directives for Catholic Health Care Services” of the U.S. Conference of Catholic Bishops.

The directives call for compassionate health care for all people, regardless of their ability to pay, and excludes prescription of contraceptives, sterilization procedures and recommendations or referrals for abortion.

“Bishop Zinkula’s visit and knowledge of the clinic plans is critical to our mission,” Dr. Millea told The Catholic Messenger, Davenport’s diocesan newspaper. “If the clinic is committed to the ‘Ethical and Religious Directives,’ we want to be certain that the shepherd for the diocese is aware of that.”

The bishop also has provided the required written support for the clinic’s plan to become an affiliate of the National Gianna Women’s Center for Women’s Health and Fertility. The center strives to help its national network of Gianna medical affiliates “provide pro-life, authentically Catholic health and fertility care to women and families,” according to its website.

The Gianna model “offers a natural alternative to artificial birth control, abortion and in vitro fertilization (IVF) and paves the way for the culture of life to flourish in parishes and communities around the country.”

Beth Millea said Life & Family purchased the 8,500-square-foot building from a business owner who bought it from Planned Parenthood. After the purchase, Life & Family requested that a priest conduct an exorcism of the building because of its past use.

“What better way to salvage a building than to exorcise it and fill it completely with pro-life ministries?” Beth Millea said. Following the exorcism, Mary Jones “felt that God was in this place.”

Staff members marvel at how people entering the building, particularly those who had been inside of it when Planned Parenthood occupied the space, now feel a sense of peace that had been missing.

Rooms where abortions took place and lives were disposed of were stripped to the studs and rebuilt. Walls have been painted in relaxing shades of blue. The building’s two-tone exterior is light gray and blue. A chapel, painted in a lavender shade, has been created in what used to be a recovery room.

In one of those renovated rooms, Beth Millea said she had an encounter with Jesus. She believes that God was thanking Life & Family for “being here and taking this space and bringing life into it.”

The building “is bathed in prayer. It’s being used for God’s glory. We’re seeing lives transformed,” said Pam Galanius, clinical director/nurse manager of the Women’s Choice Center. She witnessed a glimmer of that transformation during an emotional encounter with a mom who had an abortion 14 years ago at the Planned Parenthood clinic.

The mom arrived at the Women’s Choice Center needing diapers for a young child she gave birth to about a year ago. But when she walked into the center’s old location across the street, she learned it has been converted into a child care center. She was directed to the new center but became physically and emotionally overwhelmed with painful memories.

“She started to break down and cry loudly,” Galanius said. “All of the memories came flooding back.”

Galanius took the mom into a private room and talked with her about God’s forgiveness, healing and support and then prayed with her.

The mom said, “I know God forgave me, but I can’t forgive myself.” Galanius said she looked the mom in the eye and said, “God loves you and he forgives you and he loves you just the way you are and knows the pain you carry and he wants to help you.”

“It’s an awesome responsibility God has placed on us,” Linda Rubey said, “to be his eyes and ears, to comfort and to heal.”