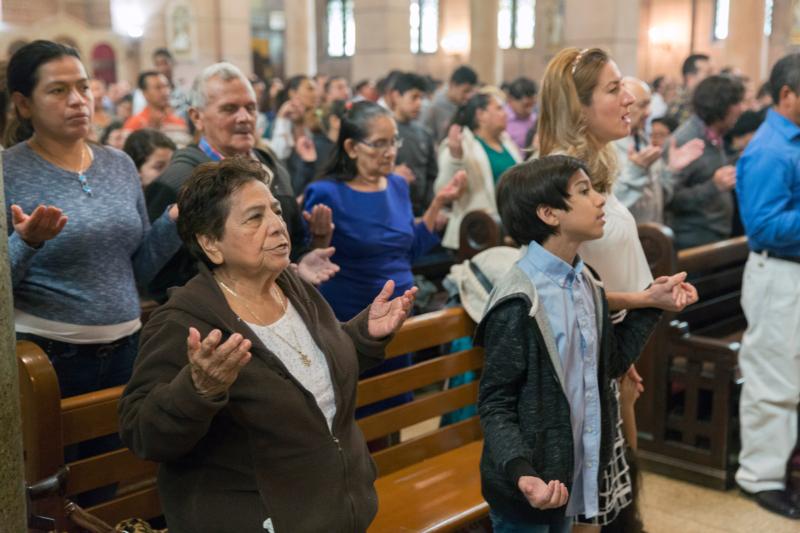 Worshippers recite the Lord’s Prayer during an an Oct. 14 Mass at the Shrine of the Sacred Heart in Washington celebrating the canonization of St. Oscar Romero. Around 800 people, mostly immigrants, attended the Mass and a parish celebration afterward. St. Oscar Romero and six other new saints were canonized by Pope Francis Oct. 14 at the Vatican. (CNS photo/Jaclyn Lippelmann, Catholic Standard)

WASHINGTON (CNS) — With a Mass, processions and fellowship, about 800 people, mostly immigrants, gathered at the Shrine of the Sacred Heart Church in Washington Oct. 14 to celebrate the canonization of St. Oscar Romero.

The modern-day Salvadoran martyr who advocated for the poor and oppressed was one of seven saints canonized by Pope Francis just hours before the celebration at the shrine.

“This is a great honor, he is a saint who comes from the poorest places where he accompanied those who suffered,” said Maria Quintero, from Hyattsville, Maryland.

The entrance procession for the Mass included people carrying flags to the altar representing about two dozen countries, mostly from Latin America, reflecting the diversity of the parish community and the world reach of St. Romero’s message.

Capuchin Franciscan Father Urbano Vazquez, who celebrated the noon Mass in Spanish, reminded parishioners that “Monsenor Romero,” as he was popularly known in El Salvador, was “someone who left all earthly possessions to follow God and receive eternal life.”

He also was an evangelizer as Pope Francis calls everyone to be. “He visited the sick, the suffering, those in the slums,” the priest said.

Father Vazquez said St. Romero faced death for speaking the truth of the Gospel and speaking up against injustices, particularly after the assassination of his friend, Jesuit Father Rutilio Grande, who also defended the poor and greatly influenced St. Romero.

The violence and oppression of El Salvador’s civil war claimed the lives of about 70,000 people and St. Romero stirred controversy for his defense of the poor and vulnerable based on Catholic social teachings.

By speaking up against injustices, he was able to convince and move hearts but also stir waters that cost him his life, but his death was not in vain, said the Salvadoran priest.

“The blood of martyrs are seeds for more Catholic Christians. That’s why the Catholic Church flourishes,” he said.

Father Vazquez urged the congregation to continue following St. Romero’s example by advocating on behalf of those without an immigration status.

Jean Johnson was one of about a dozen parishioners of Holy Trinity Catholic Church in Washington who walked in procession to Sacred Heart in solidarity with those in their sister parish, Maria Madre de los Pobres, in El Salvador, that held a procession to the Cathedral in San Salvador to mark the historic date.

Although the group was not Salvadoran, its members had been touched by the ministry they share with their sister parish in one of the poorest, most violent areas in El Salvador.

“The whole community there is 100 percent energized, transformed, empowered in the example of Monsenor Romero,” said Johnson. “When you see what they can do with the few resources that they have, you come back and say, why couldn’t we make Washington a more humane city with more affordable housing and people living with more dignity, education and job training.”

El Salvador’s ambassador to the U.S., Claudia Ivette Canjura de Centeno, also led a small delegation to Sacred Heart Church in support of the Salvadoran community in the area.

Maria Martinez, a parishioner, said she had known St. Romero since he was a priest and he went out to evangelize with her group and also helped them establish a parish.

“He was always with us, if we had to sit on the floor to eat, he would sit with us. He would say, ‘Why would I sit at a table and not you? We all have to eat together because we’re all equal,'” Martinez told the Catholic Standard, newspaper of the Archdiocese of Washington.

The festivities included marimba and mariachi music, as well as dishes from Central America. Many also shared their experiences on how St. Romero influenced their lives before he became a saint, and the young adults group performed a play about the first miracle attributed to him.

A group of parishioners from Sacred Heart were part of an estimated 10,000 Salvadoran pilgrims from around the world who traveled to Rome and witnessed the canonization; however, those unable to travel were able to see it on a big screen and with their parish community.

Other churches across the country Oct.14 also paid tribute to St. Romero. There were special Masses dedicated to the new saint at Holy Name Cathedral in Chicago, the Cathedral of St. John the Evangelist in Cleveland and the Cathedral of Our Lady of the Angels in Los Angeles.

Los Angeles Archbishop Jose H. Gomez attended the canonization in Rome along with more than 120 Los Angeles pilgrims. Several parishes in the Los Angeles Archdiocese had special vigils and Masses highlighting the new saint’s life. A chapel in St. Romero’s honor at the cathedral in Los Angeles, called the “San Oscar Romero Chapel,” features relics and photographs of St. Romero. It opened Oct. 12 and will remain open until Oct. 26.

NEXT: USCCB leaders ask for prayers, donations for hurricane victims