No shortage of issues piquing voter interest in midterm elections 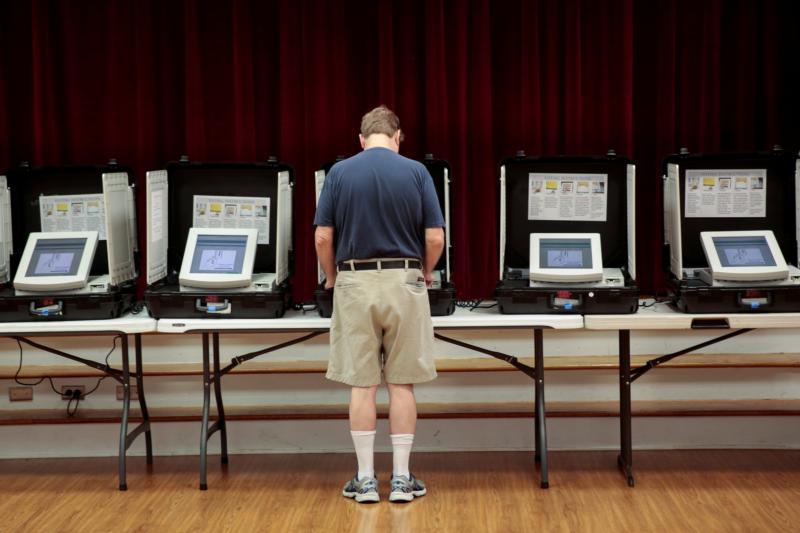 A man casts his vote in 2017 at Holy Cross Catholic Church in Tucker, Ga. The economy, immigration, the environment, terrorism, abortion, health care and Social Security are among the many issues voters say will be on their minds when they vote during the Nov. 6 midterm elections, according to results of a Pew Research Center survey released Sept. 26. (CNS photo/Chris Aluka Berry, Reuters)

WASHINGTON (CNS) — With the clock toward the Nov. 6 midterm elections ticking away, there are some parallels between the findings of a Sept. 26 Pew Research Center survey on issues of key concern to voters and issues outlined in the U.S. bishops’ “Forming Consciences for Faithful Citizenship,” a document meant to provide a moral framework Catholic voters can use to analyze issues.

Supreme Court appointments — an issue few could have foreseen — topped all comers in the Pew survey, with 76 percent calling it very important. Voters in the Pew survey also ranked as very important, at rates between 66 and 69 percent, gun policy, Medicare and taxes. Issues garnering between 53 and 60 percent interest were the federal budget deficit, trade policy and drug addiction.

The bishops also noted as among their chief concerns physician-assisted suicide, materialism, same-sex marriage, religious freedom both at home and abroad, the promotion of peace, marriage and family life, Catholic education, media issues, and global solidarity.

In “Forming Consciences for Faithful Citizenship,” traditionally issued a year in advance of a presidential election but applicable to the midterms, the bishops noted the contradictions in American life.

“We are a nation founded on ‘life, liberty and the pursuit of happiness,’ but the right to life itself is not fully protected, especially for unborn children, the terminally ill, and the elderly, the most vulnerable members of the American family. We are called to be peacemakers in a nation at war. We are a country pledged to pursue ‘liberty and justice for all,’ but we are too often divided across lines of race, ethnicity and economic inequality,” they said.

“We are a nation of immigrants, struggling to address the challenges of many new immigrants in our midst. We are a society built on the strength of our families, called to defend marriage and offer moral and economic supports for family life. We are a powerful nation in a violent world, confronting terror and trying to build a safer, more just, more peaceful world. We are an affluent society where too many live in poverty and lack health care and other necessities of life.”

The Pew survey indicated that, with higher interest in this midterm election, Democratic voters’ overall interest ranks above that of Republicans.

Health care had slipped as a top voter issue in recent years, according to Sister Carol Keehan, a Daughter of Charity, who is head of the Catholic Health Association, but the concern now is lawmakers’ “efforts at undermining the Affordable Care Act, while they (politicians) haven’t destroyed it, they have made it difficult. And they have done things that caused the cost of insurance to go up.”

“We finally got people in this country to be able to be calm when they had, or their children had, serious diseases,” Sister Keehan said. “Because before, it was ‘pre-existing conditions,’ so if you changed insurance companies, you would get insurance for everything except for what you need it for. Changing insurance is just as deadly to your economic security as it is to your health.”

She lamented the catch-22 facing many American families. “You think of the family that’s able to get Medicaid because of the Medicaid expansion, or the family that’s able to get insurance,” she said, “and all of a sudden, you can’t get insurance anymore. … These are not rich people” who are being affected, Sister Keehan added, “and you have a Justice Department that says even though there’s a law, we’re not going to defend the law.”

Mallory Quigley, vice president of communications for the Susan B. Anthony List, which promotes pro-life politicians, talked about her groups efforts in an Oct. 3 phone interview with Catholic News Service.

“We are active in states where President Trump won by an overwhelming margin and where Democratic senators are up for re-election,” Quigley said, mentioning Florida and West Virginia. “Voters are very much absolutely motivated by pro-life issues.”

Quigley spoke of targeting “unreliable pro-life voters — people who are pro-life, but typically don’t go out to vote in nonpresidential election years. It gives them another reason to vote for the pro-life challenger.” She said her organization also is “talking to Democratic groups like Hispanics and women who identify as moderate on pro-life issues.”

When told that Democrats rated abortion an even higher concern than did Republicans in the Pew survey, Quigley’s initial response was, “Interesting.” “I think a lot of that has to do with what we are hearing right now — the Supreme Court confirmation a battle,” she added.

Gun violence has persisted in the headlines since the Feb. 14 mass shooting at Marjory Stoneman Douglas High School in Parkland, Florida, followed by near-weekly mass shootings, including an incident in early October in which seven South Carolina police officers were shot, one of them fatally.

“The challenge with any justice issue is to keep people engaged and mobilized even when the news cycle moves on,” said an Oct. 4 email to CNS from John Gehring, the Catholic program director at Faith in Public Life, an advocacy group based in Washington.

“Many people pay attention to gun violence when there is a high-profile shooting and then interest can fade, but we continue to work with faith-based activists and clergy who know that gun violence is a pro-life issue. Election cycles come and go, but long-term organizing builds capacity for change.”

In rural America, the key issues are an amalgam of the economy, the environment, health care, trade and drug addiction, according to James Ennis, executive director of Catholic Rural Life.

There’s still a farm bill waiting to be approved, Ennis noted. The old one expired Sept. 30, and Congress passed a continuing resolution to extend it to Dec. 7.

“Underneath this is a bigger issue, and that’s the farm crisis, especially among dairy farmers … who are struggling to make ends meet,” he said. “One of the related issues is tariffs, and the soybean farmers. Congress can argue that it’s not that large a part of the economy and not a big deal, but to soybean farmers it is a big deal,” Ennis added. “Already prices have dropped once news of the tariffs was announced.”

Access to health care is “a real challenge because of the economics of hospitals closing due to not being able to make it in rural communities,” he said. “The other related piece to that is the opioid crisis.

“The Senate passed a large bill, a great bill (Oct. 3), and that matters. But it’s a crisis in rural communities. So many people know relatives, friends, children who are addicted. There are many drug overdoses,” Ennis added. “I would argue that it’s a symptom of the environment in rural communities that makes opioids a diversion” to their physical, emotional and financial straits.

Environmental concerns persist in rural America, Ennis said. “We’re talking now about water contamination with high nitrate levels. A report just came out of the increase in nitrate levels in both groundwater and surface water in communities that are near agriculture. There’s a significant level of nitrates due to fertilizer and runoff. This is happening not only in Minnesota but Iowa, New York and Delaware.”

NEXT: Prof who called for senators’ ‘miserable death’ to take leave