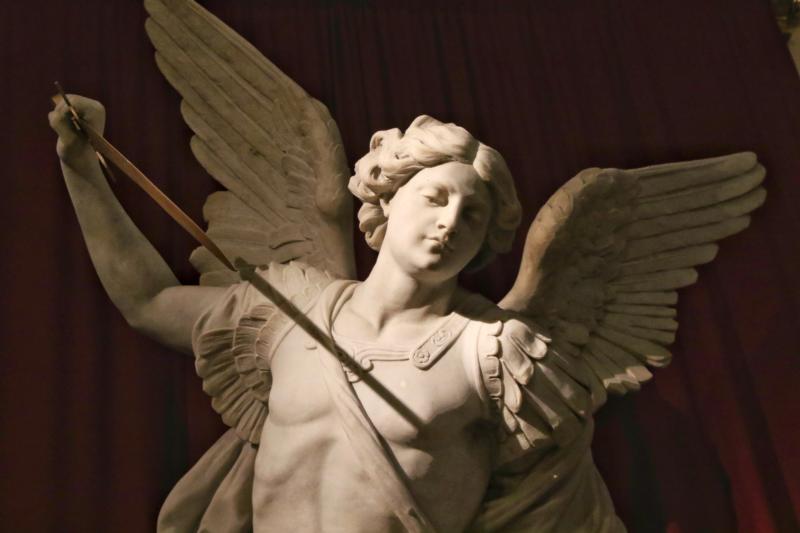 WASHINGTON (CNS) — In response to the church abuse crisis, many parishes around the country have been bringing out the big guns in a spiritual sense — calling on St. Michael the Archangel to help the church.

Some pastors have asked their parishioners to say the prayer at the end of Masses and some bishops have urged all diocesan parishes to recite it. Pope Francis also recently urged Catholics worldwide to recite it after praying the rosary during the month of October.

But for some parishes, saying this prayer at the end of Mass is nothing new.

In 2015, when Father Jose Manuel Campos Garcia was assigned to St. Joseph Parish in Roseburg, Oregon, he started praying the prayer to St. Michael after daily Mass not long after a shooting occurred at the nearby Umpqua Community College that left 10 students dead.

After he began leading the parish in this prayer after daily Mass, he said he saw a change.

“For us, it’s been a journey of healing relationships and healing the community,” he told the Catholic Sentinel, newspaper of the Archdiocese of Portland, Oregon.

And now this parish will be joined by other parishes in the archdiocese in reciting the prayer which calls on the saint to “defend us in battle” and to “be our defense against the wickedness and snares of the devil.”

The prayer reads in full: “St. Michael the Archangel, defend us in battle. Be our defense against the wickedness and snares of the devil. May God rebuke him, we humbly pray, and do thou, O Prince of heavenly hosts, by the power of God, thrust into hell Satan, and all evil spirits, who prowl about the world seeking the ruin of souls.”

In a Sept. 14 letter to priests, Portland Archbishop Alexander K. Sample urged them to pray the St. Michael Prayer after each Mass and to encourage parishioners to say this prayer daily.

In his letter, he said the church is in “distressing times with continued revelations about the failures of our brother priests and bishops” and he also said “the evil one has intensified his war” against the church.

The archbishop said there are many things to do to purify the church at this time but that “prayer will also be the foremost and most appropriate response, on which all other efforts will build.”

Father Anthony Ahamefule, administrator of Holy Trinity Parish in Bandon, Oregon, began saying the prayer after Masses in September. He described it as a good spiritual resource.

The priest, who knew the prayer as a child from saying it with his family, feels it will now “bring a sense of healing” by helping Catholics to look to Jesus in trying moments.

“The prayer of St. Michael ties into our eucharistic nature that God is always with us to protect us in challenging times,” he said.

Father Sam Kachuba, pastor of St. Pius X Parish in Fairfield, Connecticut, has been leading parishioners in the prayer since Sept. 15, as requested by Bishop Frank J. Caggiano of Bridgeport.

He said many parishioners remember the words fondly from when they were young and others are learning the prayer, following along with printed versions of it in stickers on the back of church hymnals.

The priest told Catholic News Service that parishioners see the prayer as “one part in a multi-part response to the crisis in the church” — the spiritual dimension.

One parishioner who served in the Marine Corps, told the priest he said that prayer every day, and sometimes multiple times a day, during active duty and that saying it now reminds him of what spiritual life requires.

Father Kachuba said he has known the prayer a long time and he thinks saying it together is a beautiful practice. “It never hurts to remind ourselves what is at stake: the devil is seeking our souls every day and God gives us the defense and protection we need if we just avail ourselves of it.”

Bishop Caggiano announced the plan to say this prayer via the modern method of social media. He announced on Twitter Aug. 24 that the prayer would be recited at the end of all Masses in the diocese starting Sept. 15, the feast of Our Lady of Sorrows. He also asked that Catholics pray this individually.

Other bishops who have called on Catholics to pray to the intercession of St. Michael at this time of church crisis include: New York Cardinal Timothy M. Dolan; Pittsburgh Bishop David A. Zubik; Archbishop Joseph F. Naumann, Kansas City, Kansas; Bishop Richard F. Stika of Knoxville, Tennessee; and Bishop Kevin W. Vann of Orange, California. Some bishops were encouraging this practice for the month of October, some suggested it as part of a nine-day novena and others did not give the practice a suggested end.

Bishop Robert C. Morlino of Madison, Wisconsin, called on Catholics in his diocese to say this prayer at Masses beginning last Dec. 31 as a way to pray for “the triumph of good in our world and the overcoming of evil.”

Father Andrew Menke, executive director of the Secretariat of Divine Worship of the U.S. Conference of Catholic Bishops, told CNS he did not know how prevalent this current practice was in the United States.

He said the history of saying this prayer at the end of Mass goes back to Pope Leo XIII in late 1800s. The prayer was recited at the end of low Masses, or Masses without singing, during the time when the Papal States were being confiscated by the Italians and later as an intention for the conversion of Russia.

The priest said in a Sept. 18 email that the prayer was “suppressed as a part of the Mass not long before the post-Vatican II revisions to the Mass were instituted. When the prayer is said today, it would be considered a devotion that technically takes place outside of Mass, after the final blessing has been given.”

James Hetzel, president and CEO of The Catholic Company, an online store based in Charlotte, North Carolina, said many parishes in the Diocese of Charlotte have “been praying the St. Michael prayer after Mass for as long as I can remember.”

He said he was glad to see the practice catching on around the country.

In an email to CNS, he said his company had not had a recent increase in sales of St. Michael prayer cards, but he said St. Michael-related products “have been strong sellers for us for years.”

Hetzel said he has seen “an uptick in products related to spiritual warfare,” though, and he thinks those types of books “go hand in hand with the role St. Michael the Archangel plays in our lives.”

Contributing to this story was Sarah Wolf, reporter for the Catholic Sentinel, newspaper of the Archdiocese of Portland.