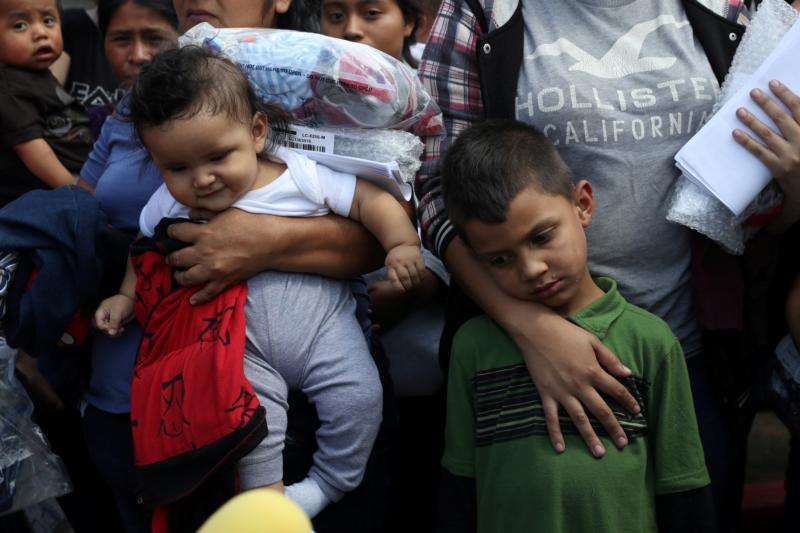 Immigrant children react as they are released from detention at a bus depot June 22 in McAllen, Texas. The U.S. bishops’ Migration and Refugee Services and Catholic Charities USA issued a statement July 12 saying their are lending their support to ongoing efforts to reunite immigrant families. (CNS photo/Loren Elliott, Reuters)

WASHINGTON (CNS) — A report from two leading faith-based agencies serving immigrants entering the United States from Mexico and Central America called on the federal government to end a policy of separating children from their families and help families comply with immigration law.

The policy caused a crisis at the border in the spring and summer months this year as federal agents jailed adults crossing into the U.S. and placed the children who had accompanied them in detention centers, largely in Texas, Arizona and California.

The faith-based agencies mobilized in July to assist the departments of Homeland Security and Health and Human Services reunify separated families and provide shelter, food, clothing, counseling and case management.

Dozens of Catholic Charities and Lutheran social service agencies throughout the country also were involved in the reunification effort.

Titled “Serving Separated and Reunited Families: Lessons Learned and the Way Forward to Promote Family Unity,” the report outlines the agencies’ response and offered a series of recommendations to the federal government, the U.S. Congress, foreign governments and nongovernmental organizations to better serve families traveling north to the U.S.

It said that while little is known about how the forced separation of children and adults will affect young people, initial reports from service providers “indicate that families are experiencing symptoms of trauma, including separation anxiety.”

It also suggested alternatives to detention for asylum-seeking families, especially those who pose no threat to the country.

“Such alternatives are often preferable as they avoid inflicting unnecessary and long-lasting trauma on children and families. Additionally, detaining families that do not present a flight or safety risk is an unnecessary use of limited (Department of Homeland Security) resources,” the report said.

Leaders of both organizations welcomed the report.

“I am proud of the response of USCCB/MRS, LIRS and our Catholic and Lutheran partners around country, including my brother bishops, to be able to work with the administration to provide support to those vulnerable families,” Bishop Joe S. Vasquez of Austin, Texas, chairman of the bishops’ Committee on Migration, said in a statement accompanying the Oct. 17 release of the report.

“I believe the recommendations made are important and should be seriously considered in order to avoid pain and suffering in the future caused by the separation of families,” he said.

In a separate statement, Kay Bellor, vice president of programs for LIRS, praised the agencies for stepping up quickly to aid families.

“As we have been for decades, communities of faith were there, poised and ready, to love and serve our neighbors in need,” Bellor said. “It is our deep hope that the lessons learned from this time in our history will prevent the cruel separation of children from their parents from happening again.”

As of Sept. 27, nearly 2,300 families had been reunited, according to the report. Some of the reunited families remained in detention facilities, some were reunited in their countries of origin, and some were released to allow them to travel to families and friends throughout the U.S.

The report showed that the flow of immigrants from Mexico had eased, but that refugees from Honduras, Guatemala and El Salvador shot upward in 2017 and 2018. It cited the growing violence from criminal gang and illegal drug networks in the three countries as reasons cited by immigrants for seeking to enter the U.S.

MRS and LIRS also called for:

— Better coordination and data collection on immigrants throughout the government to allow for improved tracking of family reunification.

— The release of families during “normal but extended business hours” from 6 a.m. to 8 p.m. to allow families to be safely transported.

— Reinstating family case management that had been discontinued in 2017 after just 18 months of operation in what originally was a five-year pilot program.

— Expanding programs that address the causes of migration.

MRS and LIRS also encouraged the U.S. government to “commit to immigration policies that are humane and uphold each individual’s human dignity. Such policies should also ensure compliance with immigration requirements and be fair to the U.S. taxpayer.”

NEXT: The men in black habits show knack for making great beer at new brewery