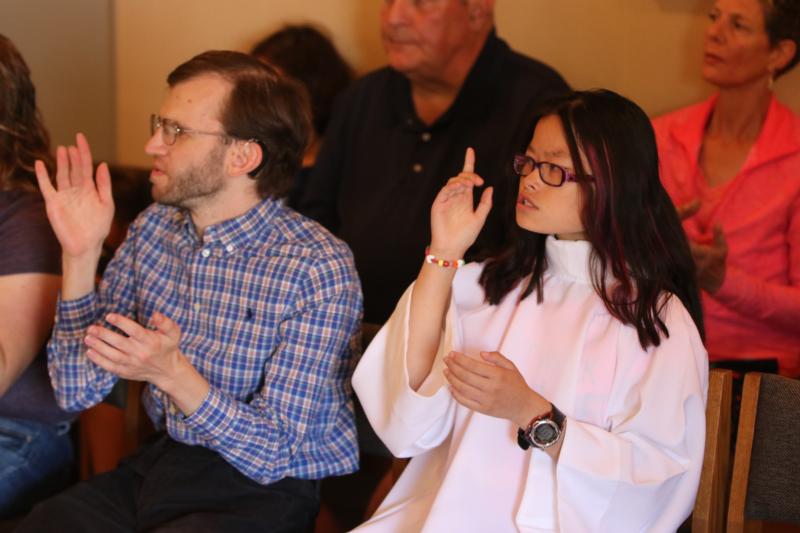 Christopher Sloan and Sophia Jo Peters sign the creed during a Mass in sign language in early September in the chapel at St. Peter Parish in Portland, Ore. “When you come here you feel peace. Why? Because you know we understand your struggles in life,” fellow worshipper Tim Blade said. (CNS photo/Ed Langlois, Catholic Sentinel)

PORTLAND, Ore. (CNS) — Even in the solitude of her room at a retirement center, Anita Jazowick prays in sign language.

She said she tells God her hopes and that she looks forward to seeing him.

Jazowick is part of the Catholic Deaf Community of the Archdiocese of Portland, formed 60 years ago and recently energized with Masses in sign language each Sunday, a website, social media and a youth group.

In addition to traveling to various churches in western Oregon, the ministry has found a home at St. Peter Parish in Portland. There, a chapel was outfitted with a semicircle of chairs and bright lights, both optimal for people worshipping in sign language.

Jazowick became deaf as a child in Canada. At Mass with hearing people, everyone just waved and smiled. No one seemed to want to know her. That changed when she found St. Peter Chapel.

Worshipping with other deaf Catholics feels like home for Jazowick. She signs prayers and responses with others and communicates after Mass with peers who understand.

“Everybody is deaf here,” Jazowick signed. “It is so nice to just communicate straight. I look forward to this every week. I learn so much. There is definitely so much happiness, an abundance of happiness.”

Tim Blade, involved in western Oregon’s Catholic Deaf Community since 1977, has become a patriarch of sorts. He has the privilege of signing the Gospel reading and the congregation looks to him for wisdom.

Blade, a former construction business owner, explains that people who are deaf learn to depend on God earlier than most.

At Sunday Mass in early September, the Gospel reading told the story of how Jesus healed a man who was deaf. Father Raul Marquez, pastor of St. Peter Parish, asked the worshippers to explain what the Gospel meant to them. Blade walked to the ambo. All watched intently.

“Many of you were raised deaf and in the real world, you were frustrated with challenges and struggles,” Blade signed to the assembly. “When you come here you feel peace. Why? Because you know we understand your struggles in life. And we support each other and help each other, and we don’t give up.”

Jilene Modlin, who worked for a decade at the Washington State School for the Deaf, coordinates ministry among deaf Catholics for the Archdiocese of Portland. The ministry now has a website and engages on social media. Modlin communicates frequently by text with Catholics who are deaf. “It brings people to us,” she told the Catholic Sentinel, Portland’s archdiocesan newspaper.

One man rode a bus from Seattle, 150 miles away; another worshipper comes regularly from Myrtle Creek, not far from the Oregon-California border.

Modlin estimates there are about 300 deaf practicing Catholics throughout western Oregon. About 30 attend the sign language Masses at St. Peter’s Chapel.

In addition to Masses, there also are Bible studies and a youth group.

In partnership with Oregon Catholic Press, the community has downloaded Scripture that is translated into the right order for sign language, a help for lectors or for deaf people who simply want to read the word of God.

Christian service already is part of the community’s life. One day after Mass, worshippers made lunches for local homeless.

Deaf Catholics explain that interpreters are no replacement for the Mass in sign language.

“I need to have this connection, this community,” signed Rosa Rachum, a senior social work major at the University of Portland. “I have hearing friends, yes, and they are nice to me. They are social. But do I really always understand them? I don’t. It is only when I am with the deaf that I feel we truly fully understand one another, and I am so grateful.”

Chuck Peters met his wife of 15 years, Lisa, through the Catholic Deaf Community. “Here, I don’t feel left out or rejected,” Peters signed. “I feel here that I am part of the community.”

Susan Teague of Beaverton said being deaf is more than a condition; it’s a culture. For deaf Catholics, being in a friendly environment is a way to keep the culture alive. The community also is trying to grow by reaching out, especially to youth and young adults.

“We have been ignored,” signed Teresa Finnigan, who signed the Mass readings. “We have faith and it is burning in our hearts and we can explode with it.”

Father Marquez said the community helps complete the people of God. “We are not doing them a favor,” he said. “We are just doing what we are supposed to do.”

For too long, the church and society left deaf Catholics on the side, which made the church poorer, he added.

In his homily at that Sunday Mass in September, Father Marquez said he would take the wisdom from the deaf parishioners to the rest of the parish.

Editor’s Note: A Catholic Sentinel video on the Catholic Deaf Community can be viewed here. The community’s website is www.catholicdeaforegon.org.