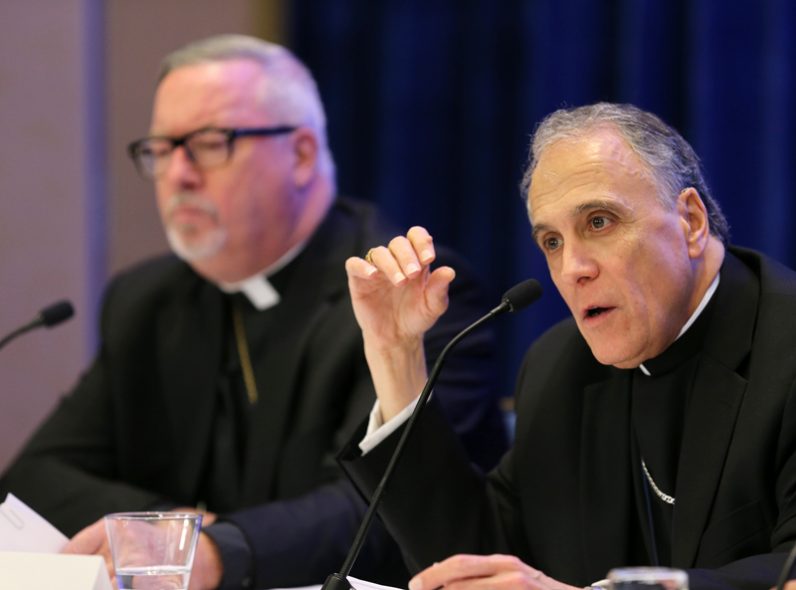 Bishop Christopher J. Coyne of Burlington, Vt. (left), looks on as Cardinal Daniel N. DiNardo of Galveston-Houston, president of the U.S. Conference of Catholic Bishops, responds to a reporter’s question during a news conference in 2017 at the bishops’ fall general assembly in Baltimore. (CNS photo/Bob Roller)

WASHINGTON (CNS) — The firestorm surrounding the clergy sex abuse crisis and the way some bishops handled allegations of abuse against priests will be an important part of the agenda of the U.S. Conference of Catholic Bishops’ fall general assembly.

The bishops have had to deal with seemingly endless revelations of allegations of abusive clergy since June, most of which referred to long-past incidents. New reports from media outlets also were expected as the Nov. 12-14 assembly in Baltimore approaches.

Bishops nationwide also are facing new challenges as several state attorneys general have opened investigations into the handling of abuse allegations. The investigations follow the release of a Pennsylvania grand jury report in August that linked more than 300 priests and church workers to abuse claims and identified more than 1,000 victims over a 70-year period dating from 1947.

The USCCB has not directly addressed the investigations and has not offered any indication that it will advise bishops on how to respond.

Beyond the discussions of clergy sexual abuse and any further actions, the bishops were expected to accept a new pastoral letter on racism, vote on whether to approve a revised national directory for permanent deacons, consider 139 English translations of Latin hymn texts used in praying the Liturgy of the Hours, and adopt a budget estimated at more than $23 million.

Security, always tight during the twice-a-year assemblies, is expected to be stricter than usual to prevent access to the Marriott Waterfront Hotel meeting site by protesters upset with the way the bishops have handled reports of abuse by clergy.

In preparing for the fall assembly, the bishops’ Administrative Committee Sept. 19 outlined actions to address the abuse crisis, including approving the establishment of a third-party confidential reporting system for claims of any abuse by bishops.

Committee members instructed the bishops’ Committee on Canonical Affairs and Church Governance to develop proposals for policies addressing restrictions on bishops who were removed or resigned because of allegations of abuse of minors or adults.

The Administrative Committee also initiated the process of developing a code of conduct for bishops regarding sexual misconduct with a minor or adult or “negligence in the exercise of his office related to such cases.”

A USCCB spokesman said Cardinal Daniel N. DiNardo of Galveston-Houston, conference president, was unavailable to discuss specific plans for the assembly because he and other conference leaders were in Rome attending the Synod of Bishops on young people, faith and vocational discernment. The synod was to conclude Oct. 28.

Francesco Cesareo, chairman of the National Review Board, also declined to discuss the issue, saying in an Oct. 16 email to Catholic News Service that board members were continuing to draft recommendations that would be delivered to the bishops during the assembly.

In August, Cesareo told Catholic News Service that the bishops “have to put their trust in lay leadership and allow that lay leadership to develop the processes and oversight when these kinds of allegations occur, particularly holding bishops accountable.”

The all-lay National Review Board, established by the bishops in 2002, oversees compliance by dioceses with the “Charter for the Protection of Children and Young People.” It has no role in oversight of bishops.

Bishop Christopher J. Coyne of Burlington, Vermont, chairman of the bishops’ Committee on Communications, told Catholic News Service Oct. 19 that the bishops must “continue to press forward” in explaining how well the charter “is working and continues to work.”

“It important that we as a conference have made incredible strides in protecting children to the point that one of the safest places for children to participate is the Catholic community in the United States,” he said.

“But that message is not getting out there. Many people still believe that the abuse of children and the cover-up by church authorities is an ongoing issue and that the bishops haven’t done enough to address the issue. That’s contrary to the evidence in contrast to the number of reported abuses since 2002,” Bishop Coyne said.

“We have to continually say the charter is working and doing its job.”

Bishop Coyne also told CNS he would recommend that dioceses voluntarily open their clergy personnel files — including those of bishops — to investigators.

Meanwhile, work on the pastoral letter addressing racism was nearing its conclusion.

Bishop Sheldon J. Fabre of Houma-Thibodaux, Louisiana, chairman of the bishop’s Ad Hoc Committee Against Racism, has shepherded the final stages of work on the document since May when he stepped in for Bishop George V. Murry of Youngstown, Ohio, who resigned to undergo treatment for acute leukemia.

The proposed statement, “Open Wide Our Hearts: The Enduring Call to Love — A Pastoral Letter Against Racism,” says that “despite many promising strides made in our country, the ugly cancer of racism still infects our nation.”

“Racist acts are sinful because they violate justice. They reveal a failure to acknowledge the human dignity of the persons offended, to recognize them as the neighbors Christ calls us to love,” the proposed pastoral letter says.

The document examines the history of racism in the U.S. While acknowledging many other groups in the county have endured racism and discrimination in the past, it focuses on three groups: African-Americans, Hispanics and Native Americans.

The revised national directory for permanent deacons, if approved, would cover all U.S. Latin-rite dioceses and would give instruction on the formation, ministry and life of permanent deacons.

The Vatican approval, known as “recognitio,” for the directory currently in use was set to expire in 2009. However, the bishops secured a pair of five-year extensions from the Vatican so the directory could be more closely scrutinized.

The 139 English translations of Latin hymn texts are part of a wider effort focusing on a new translation of the breviary agreed to by the bishops in 2012, Archbishop Wilton D. Gregory of Atlanta, chairman of the USCCB Committee on Divine Worship, wrote to the Administrative Committee in September.

“That plan directed ICEL (International Commission on English in the Liturgy) to prepare English translations of the 291 Latin hymns of the typical edition, some of which have never been put into contemporary English,” Archbishop Gregory said.

Should the translations be approved in November, the remaining hymns likely will be presented to the full body in November 2019 or June 2020, he added.

The proposed 2019 budget for the USCCB reflects changes — cuts more frequently than additions — largely outside the bishops’ control, yet will reflect a surplus.

The budget using the USCCB’s unrestricted funds is projected at $23.09 million next year, with a surplus of $245,811. The unrestricted funds are spent on the general secretariat, administrative offices, pastoral ministries, politics and advocacy, communications, and “other funding relationships.”

The USCCB’s restricted funds — contributions to national collections, funding for the National Religious Retirement Office and government contracts for the Office of Migration and Refugee Services — show proposed expenditures of $162.6 million, with a surplus of $178,372.

When cuts come into play, the most telling line item is the MRS budget.

“MRS administration is decreasing $12.1 million due primarily to the reduction in the number of refugee arrivals and that directly impacts pass-through funding to the dioceses for local administration and direct assistance to clients,” said a budget overview prepared by Archbishop Dennis M. Schnurr of Cincinnati, USCCB treasurer.

Federal awards and contracts are the chief source of MRS funds.

NEXT: As number of U.S. women religious decline, they look to future