As number of U.S. women religious decline, they look to future 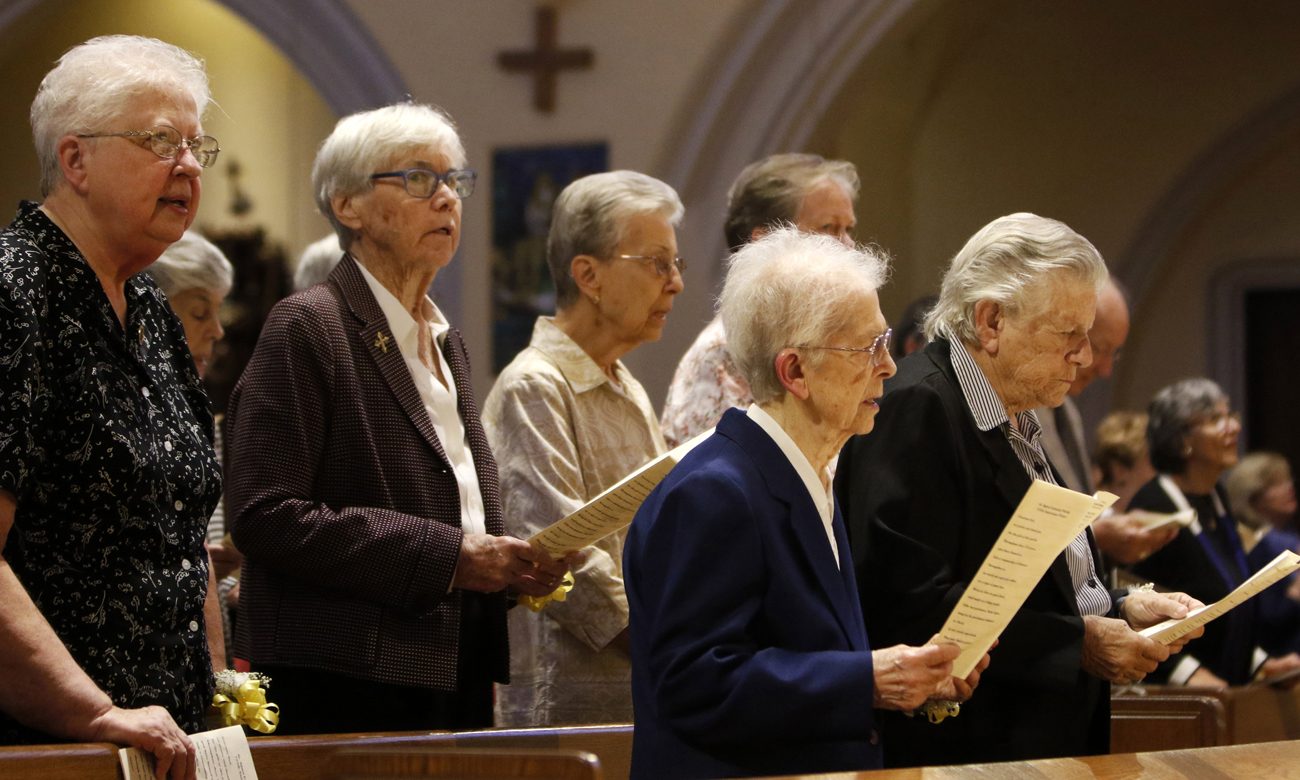 Women religious pray during a Mass honoring religious jubilarians Oct. 7 at St. Agnes Cathedral in Rockville Centre, N.Y. Bishops, women religious, canon lawyers and others met Sept. 25-26 outside Chicago to help diocesan leaders understand the precipitous decline in numbers of women in religious life and what that means to the church. (CNS photo/Gregory A. Shemitz, Long Island Catholic)

KANSAS CITY, Mo. (CNS) — The precipitous decline in the number of women in religious life and what it means to the church has people thinking about how to prepare for the future.

Their actions stem from data gathered by the National Religious Retirement Office at the U.S. Conference of Catholic Bishops that projects an estimated 300 women’s religious institutes will likely phase out of existence in the next decade.

The estimate is fueled by the fact that the overall number of women religious has declined by 75 percent since 1965 with no change in the trend expected.

Bishops, women religious, canon lawyers and others discussed the future of religious life in a two-day workshop Sept. 25-26 in Oakbrook, Illinois, outside of Chicago.

The workshop, “Fidelity to the Journey: Together in Communion,” was sponsored by the Resource Center for Religious Institutes under a grant from the GHR Foundation.

Mercy Sister Sharon Euart, the resource center’s executive director, said participants agreed not to invite the press to the workshop to allow for frank and open discussion but to release a report afterward. About 50 people attended the gathering, including Cardinal Joseph W. Tobin of Newark, New Jersey, chairman of the bishops’ Committee on Clergy, Consecrated Life and Vocations. It was the first national gathering among bishops and women religious to discuss diminishing vocations.

“It was not only important, but also timely to connect the experience of these leaders and their communities to diocesan bishops in a way that contributes to the bishops’ understanding of the experience of diminishment — not a notion we are comfortable with, yet it is a shared reality — and its impact not only on the religious institute and its members, but also on the local church,” Sister Euart said in a statement.

As many as 300 of the 420 religious institutes in the United States are in their last decades of existence because of aging membership and declining vocations, officials said.

Despite the trend, participants said they came away inspired.

“There really was a presence of the Spirit in the room. You could experience it from the time the sessions began,” Sister Euart said in an interview. “The openness of each person was truly the work of the Spirit. It was a great opportunity to share with one another and recognize how far we’ve come in working together.”

Sister Carol Zinn, a member of the Sisters of St. Joseph of Philadelphia and executive director of the Leadership Conference of Women Religious, said part of the awe and wonder of the event was the mutual recognition of how the transformation of religious life is changing the entire church.

“It’s not just about a religious congregation that’s selling its motherhouse. It’s about more than that,” Sister Zinn said. “You wouldn’t expect this topic to be so life-giving.”

Archbishop Joseph E. Kurtz of Louisville, Kentucky, said the grief and loss are real, but so is the peace many congregations have found in the completion process.

“It was a very healthy conversation, a true dialogue, grounding in our deep respect for women and men religious and the contributions they’ve made,” Archbishop Kurtz said. “I came away inspired and encouraged.”

Cardinal Tobin also said he was moved by the peace sisters have found in planning for the fulfillment of their mission.

“There’s a sadness at the realization that the death of a congregation often means the disappearance of a particular charism in the church … but there is a great serenity among the women,” he told Global Sisters Report.

The cardinal said it reminded him of the prayer of Simeon when the infant Jesus was presented in the Temple: “Lord, let your servant go in peace, because my eyes have seen your salvation.”

Sister Zinn said the peace comes when a people realize completion is part of the paschal mystery of dying and rising, which is at the core of Christian belief.

“We had a really good conversation about how do we come to an end with the same kind of joy and commitment and passion as we came into at our beginning,” she said. “If we can’t do that, there’s something missing there.”

The term “diminishment” is often used to describe the declining numbers of religious, but many prefer “transition” or “transformation,” arguing religious life is changing, not disappearing, and while the numbers may be diminishing, religious life itself is as vibrant and vital as ever.

The workshop addressed topics such as planning, care of members and use of resources, governance issues, and what it all means for local churches and dioceses. The report said the event ended with a discussion of how to continue the dialogue and replicate the experience in other areas. Participants felt the event deepened the communion between bishops and religious leaders, the report said.

“The sharing was engaging, open, honest, moving, at times humorous, and filled with stories exemplifying generations of service to the church,” Sister Euart said in her statement. “As religious leaders shared the experiences and decisions involved in their own institutes’ transitions, they spoke movingly of both the peace as well as the grieving among their members following decisions to leave ministries, sell motherhouses, find new ways to live their charism in the present, and move forward in faith, joy and hope that continues to guide their mission and their lives.”

Cardinal Tobin said while grieving is a necessary part of the transition process, a congregation should not grieve alone.

“It must be shared with the local church,” he said in the statement. “People will remember us if we are true to who we are.”

Sister Euart said she expects there will be more national gatherings and possibly regional meetings, as well.

“Our hope is this kind of dialogue around issues of transition will continue and develop throughout the country,” she said in an interview. “More than ever, I realize the importance of communication, and I’m so grateful for the bishops’ engagement and honesty. They spoke as our brothers.”

NEXT: March for Life in January will emphasize ‘pro-life is pro-science’