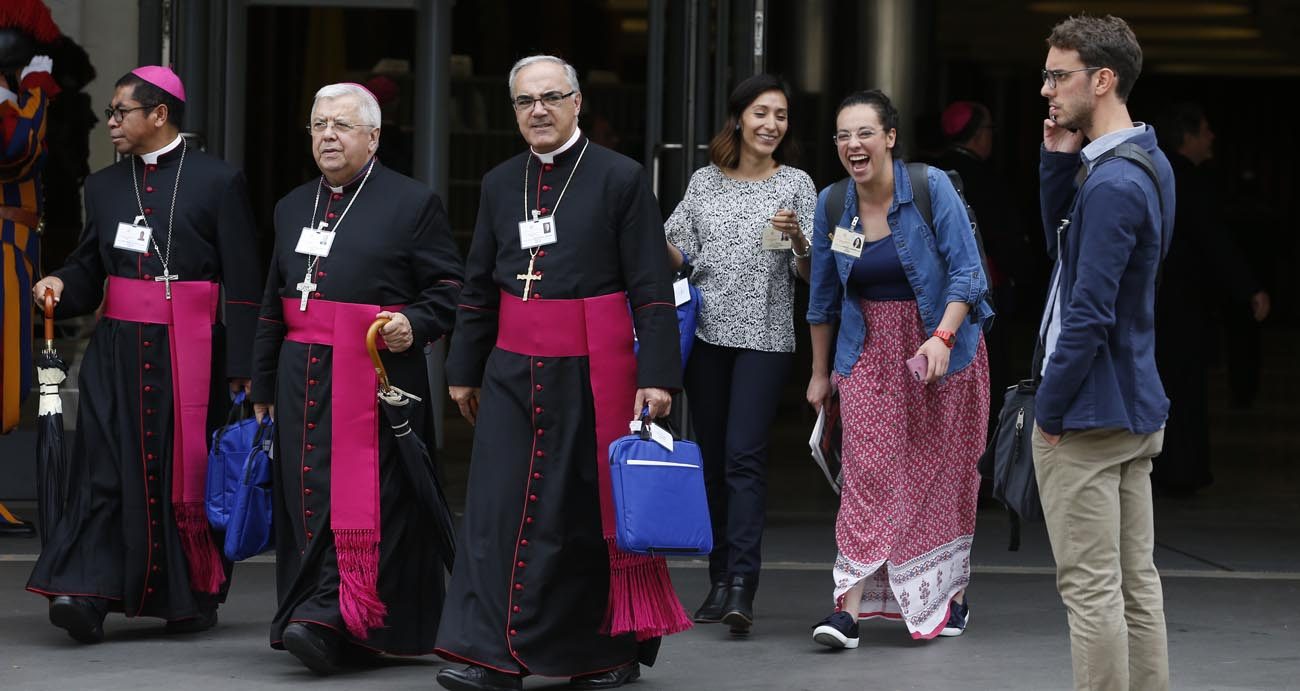 Bishops and youth delegates leave a session of the Synod of Bishops on young people, the faith and vocational discernment at the Vatican Oct 5. (CNS photo/Paul Haring)

VATICAN CITY (CNS) — The Catholic Church needs to communicate the beauty and intelligence of faith to young men and women without resorting to condescending and aggressive methods, Auxiliary Bishop Robert Barron of Los Angeles told members of the Synod of Bishops.

A “renewed apologetics and catechesis” can help young people who are tempted to leave the church due to convictions “that religion is opposed to science or that it cannot stand up to rational scrutiny, that its beliefs are outmoded, a holdover from a primitive time, that the Bible is unreliable, that religious belief gives rise to violence, and that God is a threat to human freedom,” Bishop Barron said in his speech to the synod Oct. 4.

“I hope it is clear that arrogant proselytizing has no place in our pastoral outreach, but I hope it is equally clear that an intelligent, respectful, and culturally sensitive explication of the faith (‘giving a reason for the hope that is within us’) is certainly a ‘desideratum’ (‘desire’),” he said.

Later that evening, Bishop Barron joined Nigerian Bishop Godfrey Igwebuike Onah of Nsukka at an event dedicated to the synod on youth, faith and vocational discernment.

The University of Notre Dame’s Center for Ethics and Culture sponsored the event in Rome.

Seven Notre Dame students spoke at the event about their faith, highlighting their positive experiences while also expressing their concerns that internal divisions and the scandal of sexual abuse are wounding the church.

Bishop Onah, 62, told participants it was important for bishops to listen to young men and women, otherwise the synod risks becoming a meeting of “only old people” talking about young people.

Nevertheless, Bishop Onah added, “even though many old people are talking about youth, it is still positive that they are doing that.”

The Nigerian bishop said he was moved by the testimonies of the students, including Aly Cox, a Notre Dame law student, who said that the church — wounded by the scandal of division and abuse — “is in need of healing.”

Bishop Onah said that like Christ’s wounds, which were still visible after his resurrection, the church’s wounds do “not deprive the church from being a healer.”

He also said one root of the scandal is that seminarians, priests and bishops are “wrongly made to believe that we are different.”

“We are not (different),” Bishop Onah said. “We are struggling with the same emotions, the same passions and rejoicing over the little achievements we make on our road to holiness as you do.”

If church leaders had realized that sooner, he added, “we wouldn’t have had to cause all this harm in hiding the fact that we are just men, ordinary men.”

Earlier that day, Bishop Barron told the synod that his work as founder of Word on Fire Catholic Ministries confirmed that inadequate education about church teaching is among the “crucial stumbling blocks to the acceptance of the faith among young people.”

Among the major religions, he explained, “Catholicism was second to last in passing on its traditions,” and the “army of our young who claim that religion is irrational is a bitter fruit of this failure in education.”

While some may view apologetics as “something rationalistic, aggressive, condescending,” he said he would propose a new way of explaining and defending religious doctrine that “would not be imposed from above but would rather emerge organically from below, a response to the yearning of the mind and the heart.”

The works of St. Thomas Aquinas, for example, often emerged from lively debates over disputed questions “that stood at the heart of the educational process in the medieval university,” he said. “Thomas was deeply interested in what young people were really asking. So should we.”

He also told the members of the Synod of Bishops that, without “denigrating the sciences,” a renewed catechesis can show young men and women that there are “non-scientific and yet eminently rational paths that conduce toward knowledge of the real.”

Bishop Barron said the beauty of faith as depicted in music, art, architecture and liturgy as well as the compelling lives of the saints can also provide “a powerful matrix for evangelization.”

The church, he said, “must walk with young people, listen to them with attention and love, and then be ready intelligently to give a reason for the hope that is within us. This, I trust, will set the hearts of the young on fire.”

NEXT: Youth outreach must begin with commitment to ending abuse, bishop says