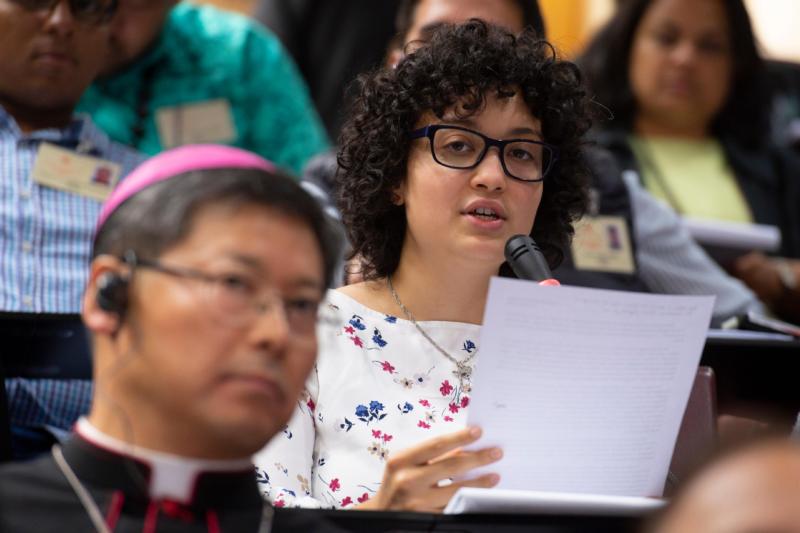 VATICAN CITY (CNS) — The first person under 30 to address the Synod of Bishops was Sister Briana Santiago, a 27-year-old member of the Apostles of the Interior Life from San Antonio.

“I think all of us young people need to be listened to first of all and then guided” in discovering who they are and who God is calling them to be, Sister Santiago told the synod Oct. 4.

Several sessions of the synod were to begin with a brief presentation from one of the 36 young people appointed observers at the synod. Several of them, like Sister Santiago, participated in the presynod meeting of young adults in Rome in March.

The meeting brought together more than 300 young adults from around the world; the vast majority were active Catholics, but the group also included members of other religions and young people who profess no faith at all. Sister Santiago told the synod she also helped read and summarize the comments of another 15,000 young people who followed the presynod on Facebook.

“I was surprised by how many desires we young people have in common despite our many countries and cultures,” she said. “There was so much joy in that hall — the joy of getting to know and being known, which you could hear in the laughter, the songs and the chatter during breaks.”

“We young people want dialogue, authenticity, participation, and there we found welcome by adults who were open and wanting to know what we carried in our hearts,” she said.

“In short, we want to be met where we are — intellectually, emotionally, spiritually, socially and physically,” she said, paraphrasing the presynod’s final statement.

The desire to be recognized, accepted and only then guided forward is something Sister Santiago told the synod she has experienced on a personal level, too.

The people God placed in her life, she said, included a parish priest who was “one of us and, in his closeness, I saw a welcoming church that was concerned about even the least of its members and my heart melted in the face of that love.”

She was blessed, she said, with catechists who “didn’t speak only about rules, but also about their personal relationship with Christ” in a way that “changed my image of God from judge to Father.”

While in university, she said, she met a religious sister “who took seriously everything I was experiencing and accompanied me, helping me to pray and develop my interior life.”

Young Catholics are looking for those kind of people, she told the synod.

PREVIOUS: Archbishop urges synod to use care with language on sexuality

NEXT: Bishops say young people need to be heard, not arrogantly lectured