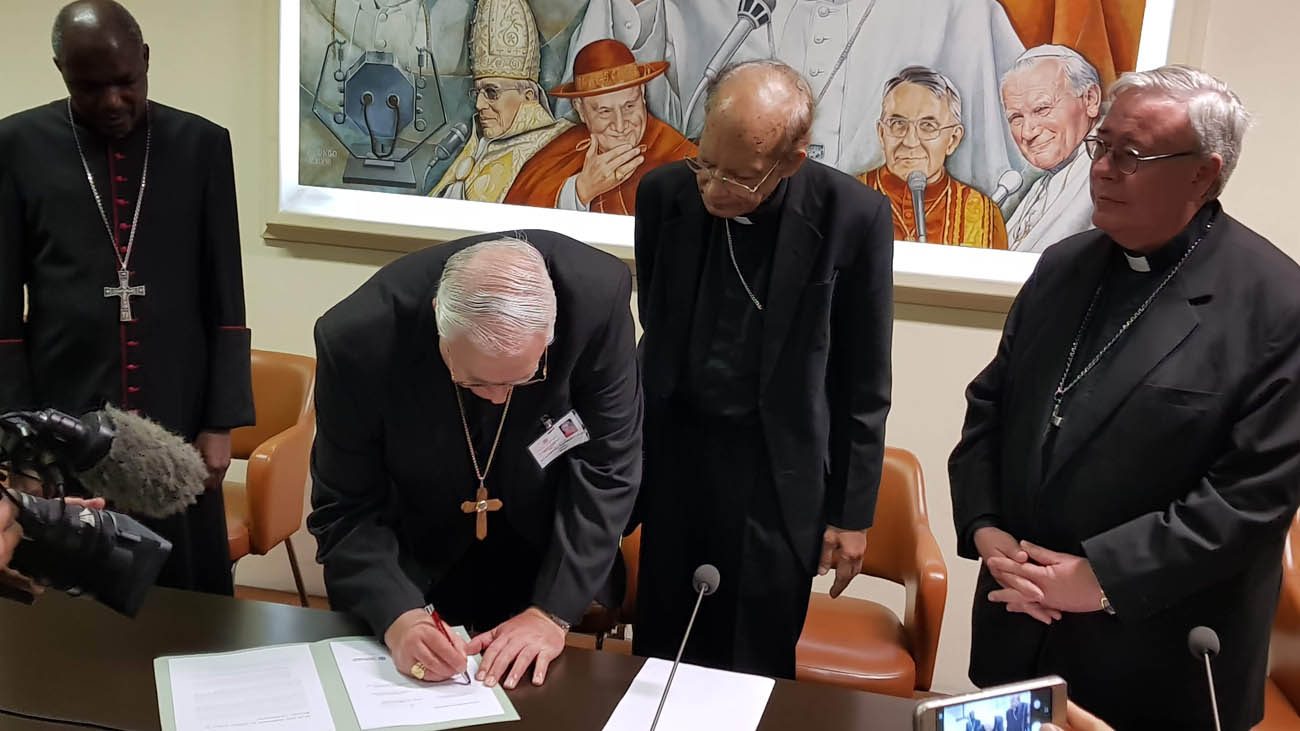 Addressing world leaders who will be attending the COP24 Summit in Katowice, Poland, in December, the bishops urged them to take concrete steps “in order to tackle and overcome the devastating effects of the climate crisis.”

“We must be prepared to make rapid and radical changes and resist the temptation to look for solutions to our current situation in short-term technological fixes without addressing the root causes and the long-term consequences,” the bishops said in the statement.

The document was also signed by Cardinal Angelo Bagnasco of Genova, Italy, president of the Council of Bishops’ Conferences of Europe; and Colombian Cardinal Ruben Salazar Gomez of Bogota, president of the Latin American bishops’ council, also known as CELAM.

Cardinal Gracias told journalists that on the issue of climate change, the church cannot rest until “the Paris agreement is fulfilled, adhered to and followed up.”

“People who are affected most are the weakest,” he said. “There is no doubt that this is something that is urgent, important, and it is our responsibility to throw our full weight on it.”

Archbishop Hollerich said that a contributing factor to the crisis was the flow of money into industries that contribute to climate change, especially fossil fuels.

“If you do not look to the sources of money and where the money flows we have a very nice way of speaking, but things will not really happen,” the archbishop said. “And things have to happen because everything is interconnected as Pope Francis says in Laudato Si’ and we are responsible for the people in Europe but also the people of other continents.”

He also recalled watching a television program that showed how the European landscape would change due to rising sea levels and how new technologies and structures could prevent it from happening.

“It made me furious. Yes, we can do it but other continents, other countries cannot,” he told reporters. “We are co-responsible for this earth, there is only one. We have to act now and I think the urgency of this call is very important.”

Joseph Sapati Moeono-Kolio, a Samoan observer at the Synod of Bishops and a member of Caritas Internationalis, said the bishops’ declaration was “a huge symbolic step, it’s a symbol of hope for many of us.”

The future of young people, especially those living in Asia and Oceania, are threatened by climate change, which has resulted in many young men and women migrating, he explained.

“As you know, young people bear the brunt of a lot of bad decisions and we want to end it here,” he said.

The effects of climate change, he continued, have resulted in more frequent and increasingly powerful cyclones that have struck his native Samoa. When those storms come, he said, villagers often run to the strongest building nearby: the local church.

“I think that’s a very good image of what we’re trying to do here, the importance of this document, the church now should be a haven of safety, especially for young people,” he said.

Sapati told journalists that the issue of climate change is “more than just science, politics and ideology” and frequent debates have “bogged down” any genuine action.

“I’d like to remind you that there is a human face to climate change, you’re looking at it,” he said. “But I am not the only one; there are many of us vulnerable people back home and it’s one of those issues where, eventually, we’ll all become the face of climate change if we don’t do anything soon.”