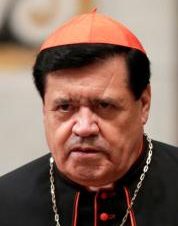 Cardinal Norberto Rivera Carrera of Mexico City is seen at the Vatican in this 2013 file photo. (CNS photo/Max Rossi, Reuters)

MEXICO CITY (CNS) — An auxiliary police officer was shot dead at the Mexico City home of Cardinal Norberto Rivera Carrera in what authorities described as an unsuccessful attempt at robbing the retired churchman.

At least two men arrived in a delivery vehicle and pretended they were delivering an envelope. With the delivery as the pretext for ringing the doorbell, “they were able to force open” the door and enter “three meters” into the property, Collins said. Gunshots were exchanged with an auxiliary police officer providing security at the property.

Auxiliary police provide security at public buildings and other specific locations. Jose Javier Hernandez Nava, a member of the Banking and Industrial Police, a unit of the local Public Security Secretariat, was killed in the shootout. The suspects fled in a pair of SUVs.

Cardinal Rivera and several religious who help maintain his home were in the house at the time of the attempted robbery, but never were in danger, authorities say. As of midday Oct. 22, the suspects remained at large.

Cardinal Rivera served as archbishop of Mexico City for 22 years. He submitted his resignation in June 2017 upon turning 75 and was succeeded by Cardinal Carlos Aguiar Retes, who was installed in February 2018.

Cardinal Aguiar expressed support his predecessor and offered prayers for Hernandez and his family.

NEXT: Pope names Steven Chu to Pontifical Academy of Sciences