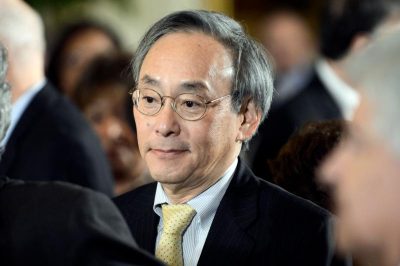 Pope Francis appointed Steven Chu, a Nobel-winning physicist from the United States, to the Pontifical Academy of Sciences.  He is pictured in a 2013 photo. (CNS photo/Michael Reynolds, EPA)

Chu, who served as secretary of energy under U.S. President Barack Obama, was appointed to the papal think tank, the Vatican announced Oct. 20.

Born in St. Louis, Chu is the co-recipient of the 1997 Nobel Prize in Physics “for development of methods to cool and trap atoms with laser light.”

He was a professor of physics and molecular and cellular physiology at Stanford University in California before serving as energy secretary from 2009 to 2013; in that post, he was the first scientist to hold a cabinet position, according to the Stanford physics department website.

After his term in the Obama administration, Chu returned to teaching at Stanford.

Chu, 70, has published over 280 papers in atomic and polymer physics, biophysics, biology, bio-imaging, batteries, and other energy technologies. Additionally, he holds 15 patents.

According to the papal academy’s website, the members are “eighty women and men from many countries who have made outstanding contributions in their fields of scientific endeavor. They are nominated by the Holy Father after being elected by the body of the academicians.”

The Pontifical Academy of Sciences encompasses six areas of study: fundamental science; science and technology of global problems; science for the problems of the developing world; scientific policy; bioethics; and epistemology.

Members participate in study groups and meetings, examining specific issues and publishing deliberations and scientific papers. The academy was established in 1936 by Pope Pius XI.

NEXT: Participants: Final synod document to focus on all young adults