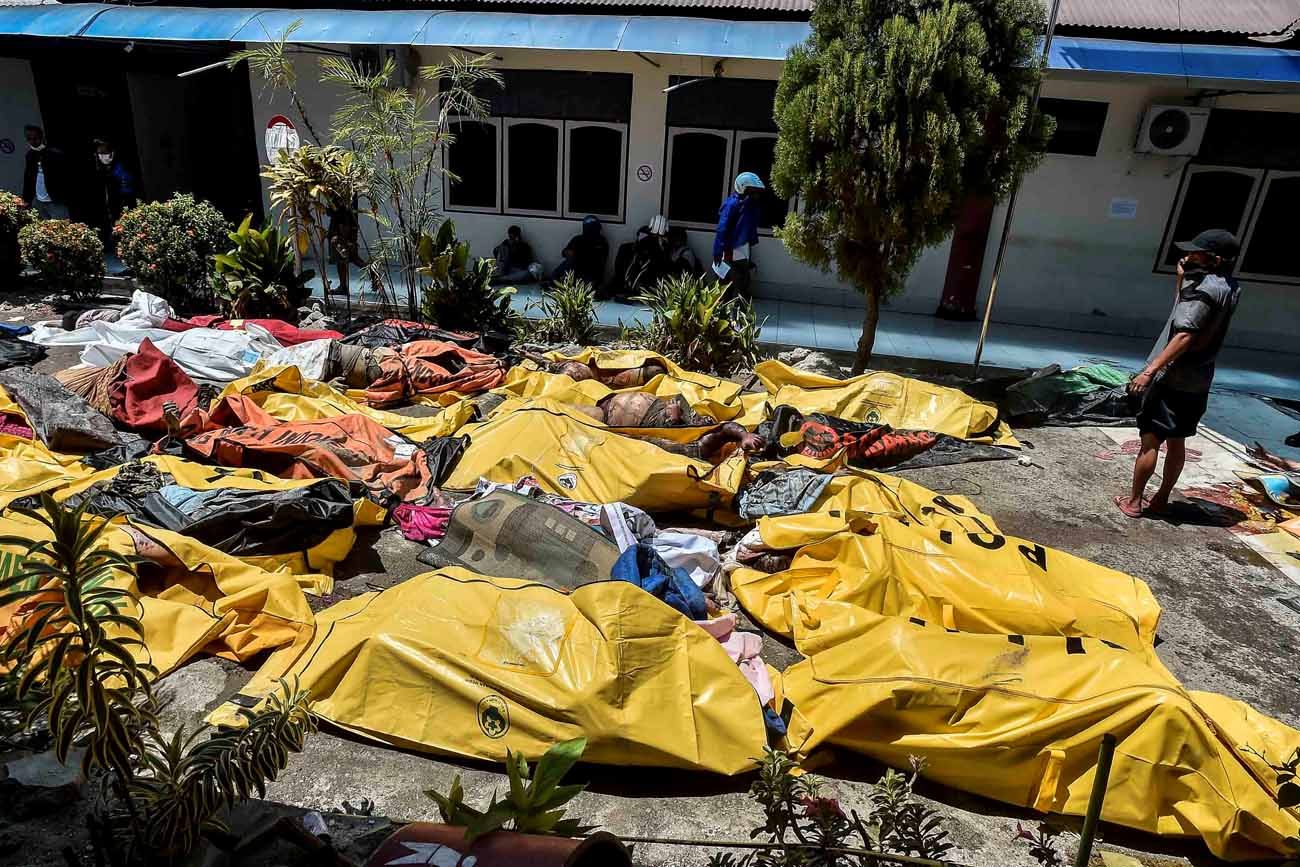 A man examines earthquake and tsunami victims who were placed outside a hospital Sept. 30 on Indonesia's Sulawesi Island. (CNS photo/Antara Foto, Reuters)

UPDATED – JAKARTA, Indonesia (CNS) — Catholic aid agencies were among those working to assess the needs and get relief to the island of Sulawesi after an earthquake and tsunami left more than 1,400 people dead.

Among those killed were 34 Christian students trapped while attending a Bible class. Fifty-two other students remained missing in Jono Oge village, reported ucanews.com.

“They are Catholic and Protestant students who were on a retreat in the location when the earthquake occurred, causing the church to collapse,” said Albert Podung, a church worker who lives in Palu, the coastal city devastated by the 7.5-magnitude earthquake and tsunami Sept. 28.

Aulia Arriani, an Indonesian Red Cross official, said the Red Cross volunteer team was having difficulty reaching the location as roads were damaged and terrain had turned to mud.

“The area is still isolated,” she said. “The land is covered with mud, and volunteers must walk nearly one and a half hours to carry the corpses to ambulances.”

The National Disaster Mitigation Agency said Oct. 3 the earthquake and tsunami had killed more than 1,400 people and injured 2,500 others. More than 120 people were still missing.

Yenni Suryani, country manager for Catholic Relief Services, the U.S. church’s international relief and development agency, said humanitarian groups were struggling to get aid to people in the hard-hit cities of Palu and Donggala.

“With the airport damaged, getting access to Palu and Donggala is a huge problem,” Suryani said. “Responders and local aid groups are having to drive overland 10-12 hours. That means a bottleneck for relief supplies in coming days. Landslides are hindering road travel in some places. There’s very limited electricity in Palu, but power is out almost everywhere. Some mobile phone towers have been repaired allowing limited communication, but it’s unreliable.”

Fatwa Fatillah, a CRS Indonesia staffer who is art of the team assessing the damage, said everything was destroyed in Balaroa village, on the outskirts of Palu.

“The streets are ruined and there’s no water or sanitation facilities for people gathered in shelters. Most families only have one tarp and one mat,” he said.

“At Talise beach, where the tsunami came ashore, it’s a scene of devastation, and search and rescue teams are still looking for survivors. All along the coast, you can see just how massive the tsunami was and the extent of the damage. Body bags are lining the road and the smell is almost unbearable. It’s extremely hot and most people are sitting under tarps, just waiting. They’re waiting for aid and the sun to go down. They have nothing to do but wait.”

Father Joy Derry Clement, chairman of the Socio-Economic Commission of Manado Diocese in North Sulawesi, told ucanews.com some parishes in the area were hit heavily, and at least two churches in Palu were partially destroyed.

“Their walls are cracked. In some cases, heavy steel pillars have become detached from their brackets,” he said, adding a number of priests suffered minor injuries due to the quake.

“We’ve formed team that will be sent to Palu soon to assess the situation there. I’ve also set up a logistics team in the commission’s office where material aid from local Catholics can be collected,” he said.

At least 500 priests, nuns, seminarians and lay Catholics had been relocated to the compound of the Immaculate Heart of Mary Parish without tents since the disaster, he added.

Ucanews.com reported that Anthonius Gunawan Agung, a 22-year-old Catholic air-controller at Palu’s airport, has been posthumously hailed as a hero for ensuring flight safety as the earthquake hit.

After making sure that Batik Air flight 6231 had taken off safely, Agung jumped out of the four-story control tower and suffered serious internal injuries, Channel NewsAsia reported. He later died from his injuries.

“Thank you for keeping me and guarding me till I’m safely airborne,” the pilot wrote on Instagram, describing Agung as “my guardian angel.”

At the Vatican, Pope Francis prayed for Indonesians after he recited the Angelus Sept. 30.

He prayed “for the deceased … for the wounded, and for those who have lost their homes and employment. May the Lord console them and sustain the efforts of those who are taking part in the relief efforts.”

PREVIOUS: Church’s problems are caused by its own members, pope says