Migration should be a choice, not forced, says cardinal 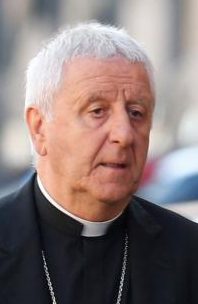 Cardinal Giuseppe Versaldi, prefect of the Congregation for Catholic Education, arrives for a session of the Synod of Bishops on young people, the faith and vocational discernment at the Vatican Oct. 8. (CNS photo/Paul Haring)

VATICAN CITY (CNS) — Young people should have a right to migrate but should never be forced to do so, said an Italian cardinal at the Synod of Bishops.

Italian Cardinal Giuseppe Versaldi, prefect of Congregation for Catholic Education, told reporters at a briefing Oct. 6, “The church in Italy and other countries has opened its doors” to migrants.

But many members of the synod, particularly those coming from migrant-sending countries in Africa and Asia, “have used the occasion to give another perspective,” he said.

Those bishops are saying, “The church in Italy is right to develop all its capacity to welcome migrants, especially young people,” he said. But the churches in Africa and Asia “are working just as hard to ensure the young people stay and fight the phenomena that exploit these young people” such as not providing them the education they need, job opportunities or peace, he said.

“People should be free to migrate, not forced to,” the cardinal added.

Even though “migration is a complex problem,” Cardinal Versaldi said, “the church has an obligation to proclaim the Gospel, and it is obvious what the Gospel says about those who are foreigners, those who are poor: to welcome is an essential value of the church.”

The press briefings on the synod, which began Oct. 3, repeatedly have mentioned migration as a major topic of discussion in the synod hall. The Vatican is not releasing texts of the speeches to the synod, although synod members can.

One effect of so many young people migrating, he said, is they “are impoverishing their country of origin, while the society and the church in their new homeland will certainly be enriched.”

Those who decide they must leave their homelands, “can easily get lost, be exploited and abused,” he said. “A church that accompanies them will provide life-saving support and human-spiritual continuity.”

Father Czerny told the synod members that the challenges facing young migrants and the church’s outreach to them actually could be seen as a lesson for the entire synod and its focus on young people, the faith and vocational discernment.

“Vulnerable young people on the move,” he said, “provide an important key to the church’s mission from now on. Why? Being young, they are not yet settled, and being migrants, their situation is all the more in flux. If they are helped, they can also help the church to discover and better understand the insecurities and aspirations of young people generally.”

Accompanying young migrants, Father Czerny said, the church will learn “to accompany the people of God who are undergoing bewildering and rapid transformations.”

He urged the bishops to ask themselves what their relationship is to youth leaving, fleeing, passing through or hoping to settle in their diocese. “Do I see them, or are they invisible? Do I meet them, or do they just pass through? Do I know them, or do they disappear from home and then, on their way, remain other, alien, strange?”