Contempt for life is the source of all evil, pope says 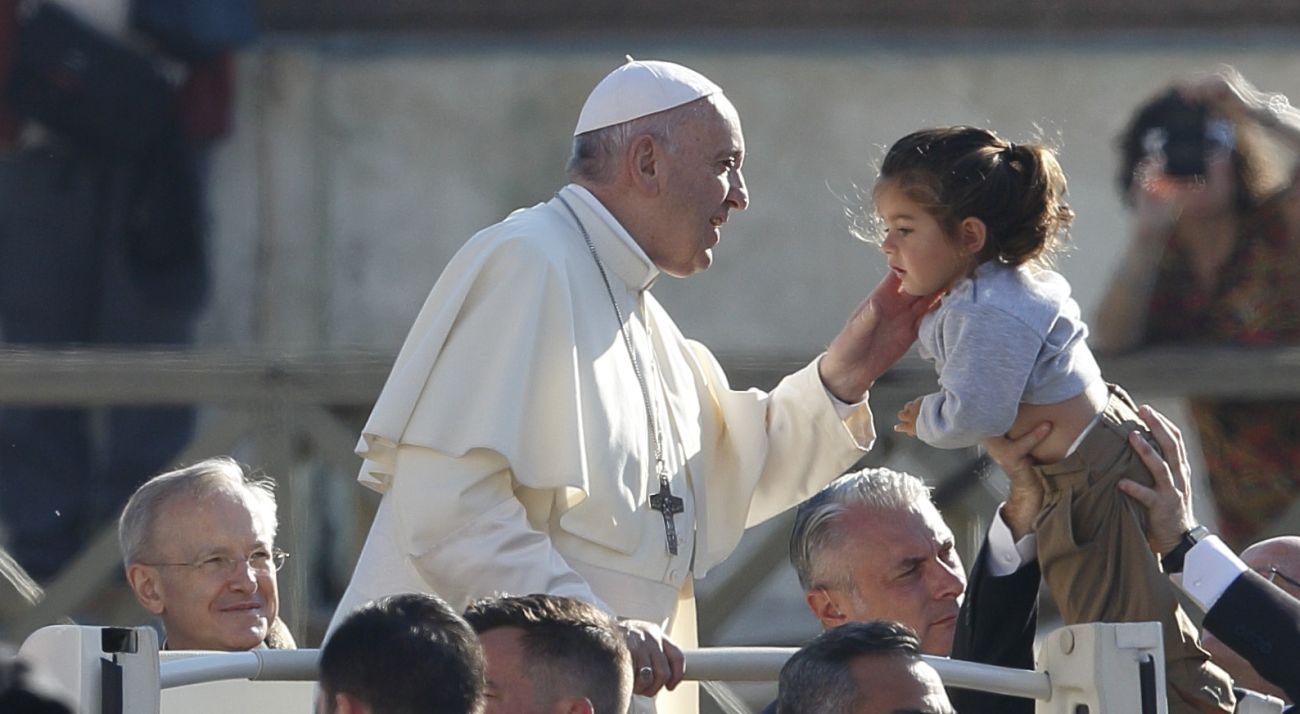 Pope Francis greets a child during his general audience in St. Peter's Square at the Vatican Oct. 10. (CNS photo/Paul Haring)

VATICAN CITY (CNS) — Procuring an abortion is wrong, inhumane and like hiring a hit man “to fix a problem,” Pope Francis said.

It is a contradiction to allow for killing a human life in a mother’s womb “in the name of protecting other rights,” he said during his weekly general audience in St. Peter’s Square Oct. 10.

“How can an act that suppresses the innocent and defenseless budding life be therapeutic, civilized or simply humane?” he asked the more than 26,000 people present.

“Is it right to snuff out a human life to solve a problem?” he asked, until the crowd shouted loudly, “No.”

“Is it right to hire a hit man to solve a problem? No, you can’t. It’s not right to take out a human being, a small one, too, in order to fix a problem. It is like hiring a professional killer,” he said.

The pope took a brief break from the Oct. 3-28 Synod of Bishops on young people to attend the morning general audience and continue his series of talks on the Ten Commandments.

He reflected on the Fifth Commandment, “You shall not kill,” as being like a wall of defense, protecting the most fundamental value in human relationships — the value of life.

“One can say that all the evil done in the world can be boiled down to this: contempt for life,” the pope said.

“Life is attacked by wars, by organizations that exploit people” and creation, by “the throwaway culture,” by systems that subjugate human lives to the calculated advantage of others, all while a “scandalous” number of people live in disgraceful conditions.

“This is contempt for life, that is, to kill in some way,” he added.

Violence and refusing life are rooted in fear, he said.

Welcoming another challenges one’s own selfish individualism, he said, pointing to the example of when a mother and father discover their unborn child will be born with disabilities.

“A sick child is like every person in need on earth,” like the elderly who need care, like the poor who can barely make a living, he said.

They are all treated as if they were a problem, he said, but in fact, they are “a gift of God that can pull me out of my egocentricity and help me grow in love.”

“Vulnerable lives show us the exit, the road to save us” from a selfish existence and to discover “the joy of love,” he said, adding a word of thanks to Italian volunteers, saying they had the strongest dedication he has ever seen.

The idols of the world that lead people to refuse life are power, success and money, such as when decisions to end someone’s life are based on the costs involved if that life were to continue.

“The only authentic measure of life” is love, he said; God loves every single human life.

“In every sick child, in every weak elderly person, in every desperate migrant, in every fragile and threatened life, Christ is looking for us, he is seeking our heart in order to open it up to the joy of love.”

“It is worth welcoming every life because every person is worth the blood of Christ himself. You cannot scorn what God has loved so much,” he said.

“Do not scorn life,” not the lives of others or one’s own, he said, particularly with addictions that ruin lives and can lead to death.

So many young people, the pope said, need to hear the call to not devalue or refuse their lives, which are “a work of God, you are a work of God!”

NEXT: Stir up stagnant church that only waits around, archbishop says