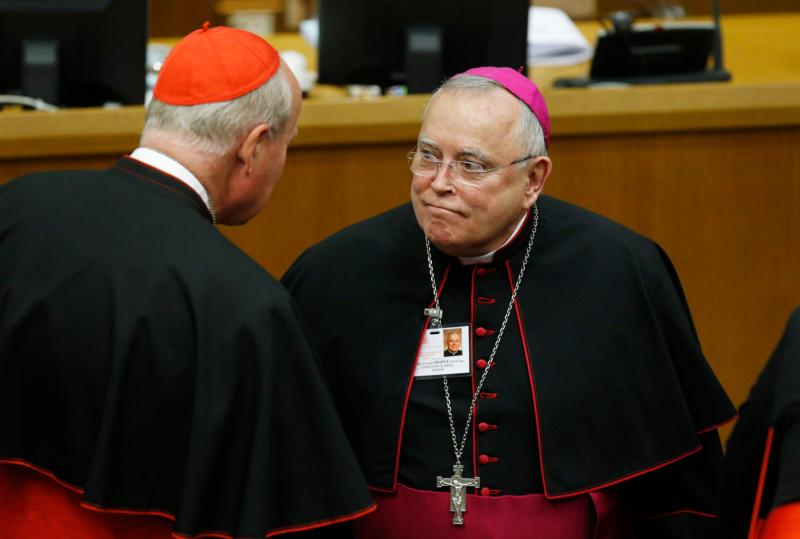 Archbishop Charles J. Chaput of Philadelphia talks with Cardinal Christoph Schonborn of Vienna, Austria, before the opening session of the Synod of Bishops on young people, the faith and vocational discernment at the Vatican Oct 3. (CNS photo/Paul Haring)

VATICAN CITY (CNS) — In their first formal reports to the entire Synod of Bishops, many of the gathering’s working groups reported that they had discussed the clerical sexual abuse crisis and, especially, its impact on young Catholics.

The theme of the synod is “young people, the faith and vocational discernment,” but the working group English-A, which includes bishops from the United States, Australia, Ireland and England, said, “the context for vocational discernment has changed utterly. Our group suggests that the issue of child sexual abuse in the church cannot be skimmed over tangentially in a few short sentences.”

“The shattered trust, the trauma and lifelong suffering of survivors; the catastrophic failures in case management; the continued silence and denial by some of these awful crimes and sins — these issues cry out to be named openly by the synod,” the group said.

As one of the group reports released Oct. 9, the English speakers said bishops “should not be afraid” to share how they “feel about this shocking betrayal of our youth and of all the faithful.”

“As one member of our group reminded us: ‘Trust arrives slowly, on foot, but Trust leaves on horseback! Trust must be rebuilt, one person at a time.'”

Abuse and the lack of trust also were mentioned by the English-D group, which said, “A church that cannot be trusted is simply incapable of reaching out to young people in an effective way.”

“As is obvious to everyone, this scandal has undermined the work of the church in practically every way, precisely because it has compromised our credibility,” said the group, which included bishops from Canada and the United States, as well as Archbishop Charles Scicluna of Malta, a leading investigator of abuse claims.

Members of the group thought, however, that “even as we acknowledge our sorrow and guilt in this regard, mention should be made of the very positive and effective steps the church has taken since 2002 to address this matter concretely.”

The Italian-A group also discussed the abuse scandal in the context of the “obstacles” the church has put in the way of its evangelizing young people. “Several times there was mention of the damage provoked by the growth of scandals in the area of sexuality, wealth and the abuse of authority. The whole church urgently must adopt an attitude of conversion in order to accompany young people in their growth.”

Abuse seemed to be an especially strong theme of speeches offered in the synod’s general sessions, said the Spanish-A group, and its members urged the bishops to remember that “the abuses not only damage the church, they go against being disciples of Jesus.”

The Italian-B group said young people want “a more authentic and relational church, concretely committed to justice and to serving the poor.”

The working groups offered suggestions to the synod based only on the first part of the working document and speeches in the synod hall referring to it.

Most of the groups requested that the synod issue a direct message to young people; some of the groups also suggested that it be brief, use plain language and be accompanied by a short video.

The groups were unanimous in calling for a final document that is more biblically based, often complaining that the synod working document was too “sociological” in its approach to the reality young people are living today and ways the church must respond.

Another thing missing from the working document, several groups said, was an exploration of a concept keenly important to young people: friendship.

“The feeling was very strong in our group that the reality of friendship and its importance for young people needs to be recognized in the document that this synod produces,” English-B group said. “Friendship is yearned for by our young people. They find community through this and they find family in this way.”

The Spanish-A group said, “In the formation of seminarians and religious (men and women), they must be formed in and for friendships, for leadership and communion to prevent tyranny and loneliness.”

With “the recent growth of new forms of fundamentalism and intolerance,” the Italian Group B said, there is a growing need to educate “young people in respect for the other, dialogue between believers and nonbelievers and in the area of interreligious and ecumenical” relations.

No group explicitly took up the call of Archbishop Charles J. Chaput of Philadelphia to avoid using the term LGBT in the document, but several groups emphasized the importance of the church listening to young people’s questions about sexuality and presenting them with understandable explanations of church teaching.

“We noted that a proclamation of chastity, as achievable and good for our young people, is missing” from the synod’s working document, said group English-A, which is not Archbishop Chaput’s group.

Young people, the group said, want “stable reference points, moorings or stepping stones to help them navigate their way through the often-contradictory messages being hurled at them from every direction.”

The English-C group, which provided a list of topics mentioned by members, rather than a narrative report, included the line, “We need to make sure we are clear that young people who don’t agree with the church on sex are still members of the church.”

“Mercy” must characterize the way questions regarding sexuality are dealt with, the French-B group said. “The church is called to update its teaching on this theme, knowing that it is a servant of God’s mercy. In this sense, it could be useful to elaborate and propose to the local churches a document that deals with questions tied to affectivity and sexuality.”

Pastors today “do not have answers to young people’s questions nor a pastoral and missionary strategy appropriate for a globalized, secular and digital culture,” the group said. “It appears urgent and necessary to rethink the content of formation in seminaries and novitiates, to propose a new style of priestly life and a new form of exercising priestly ministry.”

NEXT: Contempt for life is the source of all evil, pope says