Defend church from those who seek to destroy it, pope says 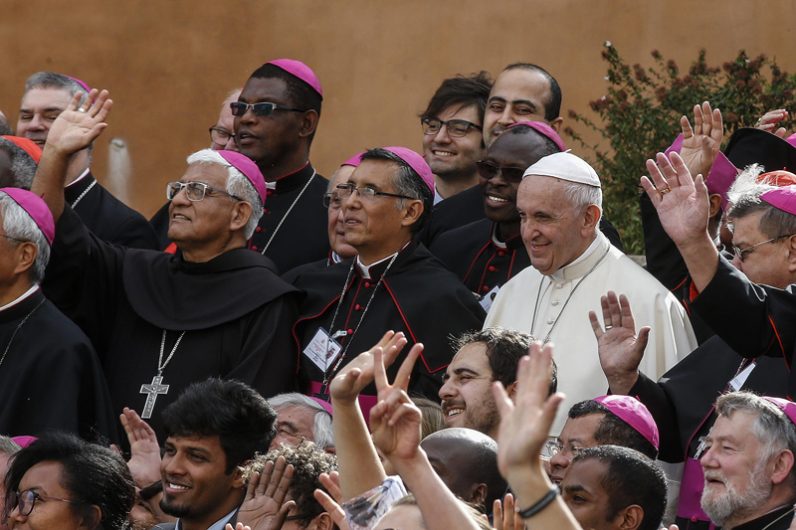 Pope Francis poses for a group photo with bishops and participants at the Synod of Bishops on young people, the faith and vocational discernment at the Vatican Oct. 27. (CNS photo/Fabio Frustaci, EPA)

VATICAN CITY (CNS) — As the Synod of Bishops finished its work, Pope Francis called on all Catholics to defend the church from those who are influenced by the “great accuser” seeking to destroy it.

After thanking the synod members, observers and experts following the vote on the final document Oct. 27, the pope said that although church members are sinful, “our mother (the church) is holy,” but “because of our sins, the great accuser always takes advantage.”

While in some parts of the world, Christians suffer persecution because of their faith in Jesus, there is “another type of persecution — continuous accusations — in order to dirty the church. The church cannot be dirtied. The children, yes, we are all dirty, but not the mother. Therefore, this is the time to defend the mother,” he said.

“It is a difficult moment,” he continued, “because through us, the great accuser wants to attack the mother. And no one touches the mother!”

Before concluding the synod’s final meeting, Iraqi Cardinal Louis Raphael Sako of Bagdad, the Chaldean Catholic patriarch and synod president-delegate, said the synod “was a gift for us and for the whole church.”

Cardinal Sako also appealed to the pope, the synod members and young people to not forget about the plight of Christians in the Middle East.

“If the Middle East is emptied of Christians, Christianity will be left without its roots,” he said. “We need your humanitarian and spiritual support as well as your solidarity, friendship and closeness until the storm passes.”

The patriarch also reiterated the support of the world’s bishops for Pope Francis. Citing an Arab saying, Cardinal Sako told the pope that “the fruitful tree is struck with stones.”

Cardinal Lorenzo Baldisseri, general secretary of the Synod of Bishops, also expressed the assembly’s “filial affection and profound adherence to your Petrine ministry.”

Addressing the young people who served as synod observers, Cardinal Baldisseri thanked them for “their presence, their contributions, their interventions and their suggestions. They have show us the freshness of their youth, their generosity, imagination and resourcefulness.”

In his off-the-cuff remarks, Pope Francis also thanked the young men and women at the synod “who brought their music here to us in the hall.”

“Music is the diplomatic word for uproar,” he said to laughter and applause.

The synod, he said, “is not a parliament” but rather “a protected space for the Holy Spirit to act.”

The fruit of the synod, he added, is not just a final document for Catholics around the world, but a work of the Spirit that must first “do something in us, it must work in us.”

“We are the recipients of the (final) document. It is primarily for us. Yes, it will help many others, but we are the first recipients. The Holy Spirit did this among us. Do not forget this, please,” Pope Francis said.

“It is the Holy Spirit who gave us this document, for all us including myself, to reflect on what he wants to tell us.”

PREVIOUS: Pope apologizes to young people who have felt ignored by the church

NEXT: Synod’s words on ‘synodal’ church puzzle some people