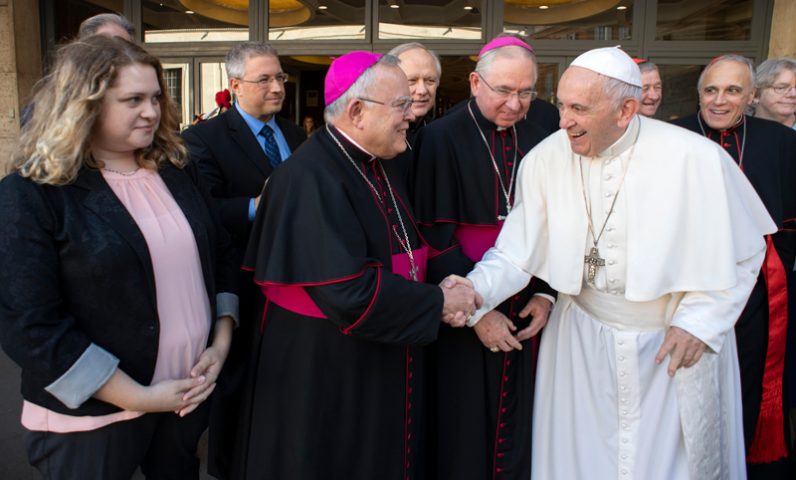 Pope Francis greets Archbishop Charles J. Chaput of Philadelphia after a session of the Synod of Bishops on young people, the faith and vocational discernment, at the Vatican Oct. 26. Also pictured are employees and officials of the U.S. Conference of Catholic Bishops and other U.S. bishops. (CNS photo/Vatican Media)

VATICAN CITY (CNS) — “Synodality,” a key concept of Pope Francis’ papacy, was used repeatedly in the final document of the Synod of Bishops on young people, the faith and vocation discernment.

In simple terms, “synodality” means “walking together” with every member of the church, recognizing that the grace of baptism makes one part of the body of the church and, therefore, responsible for its life and mission.

“The church must really let herself be given shape by the Eucharist that she celebrates as the summit and source of her life,” being like “the bread made from many stalks of wheat and broken for the life of the world,” the synod document said.

“The fruit of this synod, the choice that the Spirit has inspired in us through listening and discernment, is to walk with young people going out to all to witness to the love of God,” it said. “We can describe this process by speaking of synodality for mission, that is, missionary synodality.”

(See Archbishop Charles Chaput’s reflections on the close of the synod, including the question of synodality, in his recent column.)

Archbishop Hector Miguel Cabrejos Vidarte of Trujillo, president of the Peruvian bishops’ conference, told reporters Oct. 25 that especially with the involvement of young people at the synod, the bishops saw how synodality could be a way of life that “promotes everyone’s participation.”

The International Theological Commission, a group of theologians appointed by the pope and working under the Congregation for the Doctrine of the Faith, published a lengthy document in March on “Synodality in the Life and Mission of the Church.”

“The concept of synodality refers to the involvement and participation of the whole people of God in the life and mission of the church,” the commission said.

In its Catholic understanding and usage, the commission wrote, synodality “promotes the baptismal dignity and co-responsibility of all, makes the most of the presence in the people of God of charisms dispensed by the Holy Spirit, recognizes the specific ministry of pastors in collegial and hierarchical communion with the bishop of Rome, and guarantees that synodal processes and events unfold in conformity with the deposit of faith and involve listening to the Holy Spirit for the renewal of the church’s mission.”

In other words, consulting and listening to all members of the church is essential for discerning a path forward, but those decisions cannot violate the truths of the Christian faith and must be verified by a priest, bishop or the pope, depending on whether the decision is local, diocesan or has a universal impact.

As members of the Synod of Bishops reviewed a draft of their final document and prepared amendments to it, some bishops told reporters they thought the emphasis on synodality was exaggerated, since very few synod participants mentioned the term during the assembly, which began Oct. 3.

Others cautioned that for people living in countries with a large percentage of Anglicans or Protestants, the term could lead to confusion, almost as if the synod was saying it wanted a church where decisions were made prayerfully, but democratically.

The synod’s final document spoke of the value of listening to, praying with and grappling with the questions brought to the gathering by the synod observers under age 30.

In that experience, the final document said, “we recognize a fruit of the Spirit who continually renews the church and calls her to practice synodality as a way of being and acting, promoting the participation of all the baptized and of people of good will, each according to his or her age, state of life and vocation. In this synod, we have experienced that the collegiality which unites the bishops ‘cum Petro et sub Petro’ (with and under Peter, the pope) in their concern for the people of God is called to articulate and enrich itself through the practice of synodality at all levels.”

Cardinal Christoph Schonborn of Vienna, speaking to reporters at the Vatican Oct. 26, admitted that the term was not discussed in depth at the synod, but “it is what we have been doing for a month.”

While the Second Vatican Council’s call for “collegiality” refers to the College of Bishops acting with and under the pope, he said, “synodality is much wider” and refers to all the baptized taking responsibility for the church and its mission, each according to his or her talents and role within the church.

“It is to walk together, to be together on the way of faith and that concerns everybody,” Cardinal Schonborn said. But “it doesn’t take away the difference of function and ministry and roles.”

While Pope Francis began speaking of synodality in the first months of his papacy, which began in March 2013, his most extensive treatment of the topic came in October 2015 when he led a celebration of the 50th anniversary of St. Paul VI’s establishment of the Synod of Bishops.

“The journey of synodality is the journey that God wants from his church in the third millennium,” the pope had said at the celebration. “A synodal church is a listening church, aware that listening is more than hearing. It is a reciprocal listening in which each one has something to learn.”

PREVIOUS: Defend church from those who seek to destroy it, pope says

NEXT: Synod document: Listen to, support, guide, include young people