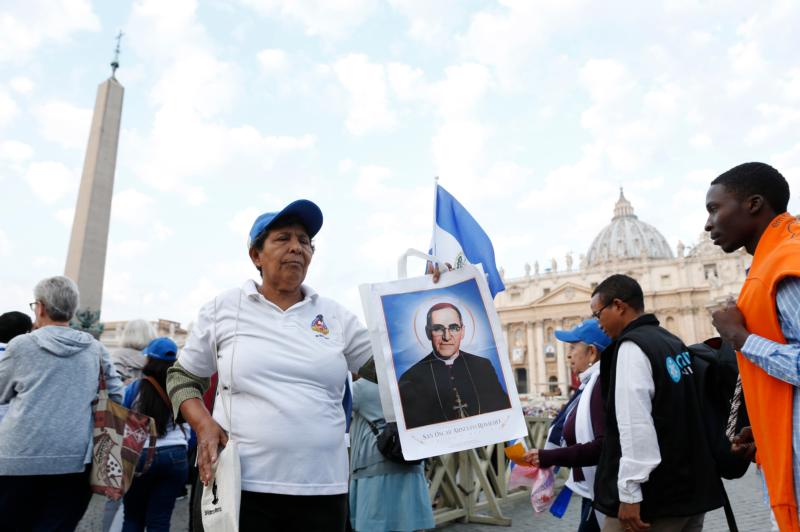 Milandro DeJesus holds a picture of St. Oscar Romero before Pope Francis' celebration of the canonization Mass for seven new saints in St. Peter's Square at the Vatican Oct. 14. Among the new saints are St. Paul VI and St. Oscar Romero.(CNS photo/Paul Haring)

Milandro DeJesus holds a picture of St. Oscar Romero before Pope Francis’ celebration of the canonization Mass for seven new saints in St. Peter’s Square at the Vatican Oct. 14. Among the new saints are St. Paul VI and St. Oscar Romero.(CNS photo/Paul Haring)

ROME (CNS) — For many pilgrims from El Salvador and for many Catholics who focus on the tie between faith and justice, waiting for the canonization of St. Oscar Romero was an exercise in patience.

The declaration of the sainthood of the Salvadoran archbishop, who was assassinated while celebrating Mass in 1980, teaches men and women that “holiness is first and foremost a gift” that doesn’t come quickly, said Cardinal Luis Antonio Tagle of Manila, Philippines.

“In Oscar Romero, we saw how he struggled, how he took the painful path of reconciling his previous understanding of the Gospel and the performance of the church’s mission with the openness that Vatican II presented,” the cardinal told Catholic News Service after celebrating a vigil Mass Oct. 13.

“In a world where everyone is in a hurry, in a rush, and we want things perfect, well, he seems to be telling us, ‘Take it easy, be patient!’ And if you have to suffer through your own internal revolution of change out of love, then it’s worth going through it,” he told CNS.

The Mass preceded a conference and a concert sponsored by Caritas Internationalis celebrating the Oct. 14 canonizations of both St. Romero and St. Paul VI.

Holding back tears, Cardinal Tagle said in his homily that true Christians give witness not to an ethic or a law, but “a person, Jesus who loved me, who gave his life for us and I experienced this love, this charity!”

“And when I live by that love, my life becomes a testimony to the gift I have received,” he added. “And death does not become the annihilation of life, but death becomes the apex of life. When we love, we live. But when we love, we also die. But it is in dying that we live.”

Cardinal Rodriguez said St. Romero’s canonization wasn’t just a reason for El Salvador to celebrate but for all Central America and that “it also is a reason to hope.”

St. Romero “simply took up his cross,” the cardinal said, “and it was a heavy cross because (it was) the cross of his brothers (bishops) who didn’t support him — because there were very few who supported him — and even in the midst of that, he knew how to go forward until he triumphed.”

For Manuel Roberto Lopez, El Salvador’s ambassador to the Holy See, there is only one word that comes to mind as a Salvadoran witnessing the beloved archbishop’s canonization: a blessing.

“That’s the word that comes to mind because I feel that it is a blessing that comes from heaven not only for Salvadorans, it’s for all Latin America, for the whole world,” Lopez told CNS.

“I hope the Salvadoran people, especially young people, understand this message and they can truly live out the teachings of Romero because, if not, his blood will be shed for nothing,” he said. “St. Romero is waiting for that fruit from us.”

Archbishop Vincenzo Paglia, postulator for St. Romero’s sainthood cause, said he believed the canonization of the Salvadoran archbishop and of St. Paul VI marks a turning point for the Catholic Church.

“For me, this is not only a beautiful celebration,” Archbishop Paglia told CNS Oct. 13. The canonizations mark “a new step for the church.”

“There will be three people, two who are in heaven and one on earth: Paul VI, Romero and Pope Francis, who all admire each other,” the archbishop said. “This tryptic is explosive, and for me, the message is very clear: This is a church that has chosen to blend with history and with the preference of the poor.”

“What the cardinals and priests who opposed (St. Romero’s canonization) don’t understand is that (St. Romero’s) faith was not theoretical, it was a faith blended with current times, charity, justice and the forces of a changing world,” Archbishop Paglia said.

Before sunrise Oct. 14 thousands of pilgrims stood in line to enter St. Peter’s Square for the canonization Mass; many of them were wearing white and blue scarves and hats, the colors of El Salvador’s flag.

“We have been waiting since midnight and we haven’t slept because we want to be among those privileged to be here for the 6 million Salvadorans who wanted to come,” Jose Antonio Garcia Garcia, a Salvadoran pilgrim living in Rome, told CNS.

“It is a historic event, a transcendental day,” Liliana Emeldy Reyes, another pilgrim who traveled from El Salvador, told CNS.

As St. Romero is known for defending the poor and the victims of El Salvador’s military repression in the 1970s, some viewed his legacy as politicized. Reyes told CNS she was among those who had a negative opinion of him until a few years ago.

“Many people would say that he was polarizing and that he wasn’t a universal person but only fighting for the left,” Reyes told CNS. She changed her mind when she met pilgrims who traveled to El Salvador for his beatification in 2015. “Now I know that he is a just man,” she said.

NEXT: Relics offer physical reminder that saints were real people