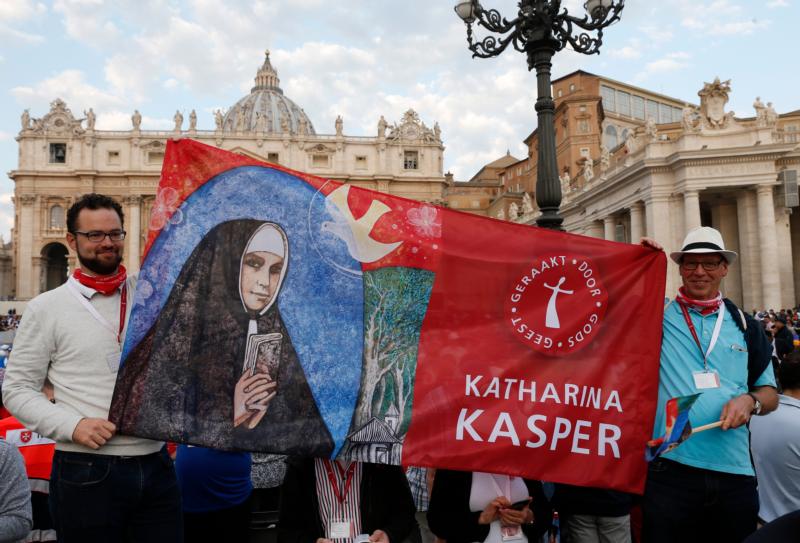 VATICAN CITY (CNS) — As the sun rose over the Tiber River, seven banners hanging on the facade of St. Peter’s Basilica depicting the church’s newest saints were illuminated by the new day.

Pilgrims from all over the world had lined up behind metal barricades on the outer perimeter of the square until members of the Swiss Guard, security officers, police at metal detectors and volunteers wearing blue bibs got into position and ready for the tens of thousands of people attending the canonization ceremony and Mass Oct. 14.

“Good morning, Brescia!” shouted one volunteer steering a large group from the Italian province, where St. Paul VI was born, through the maze of barricades to get into the square. Many pilgrims were easy to identify with colorful banners, flags, hats or bandanas emblazoned with their saint’s image or name.

“My grandfather was a big fan” of St. Catherine, Louisa said, and he claimed to have had a vision of her while in the hospital near death. The now-saint told him to get water from a particular fountain and when his wife did so, “he was cured,” the granddaughter said.

“It was his big wish to be here, but he died this January so it’s important for us to be here for him,” she added.

A group of seminarians from the Alessio Ascalesi archdiocesan seminary in Naples left at 3 a.m. to get to Rome for the canonizations of St. Vincenzo Romano, an Italian priest born in Naples in 1751, and Nunzio Sulprizio, a layman who died in Naples in 1836 at the age of 19.

“We chose Vincenzo Romano to accompany us on our journey to be saints in little things,” a seminarian named Francesco said; “and we chose Nunzio, because he wanted to be a priest but couldn’t, so we look to him to see what pushes us to want to be a priest.”

About 20 seminarians from the Diocese of Cremona were there for St. Francesco Spinelli, a 19th-century priest who founded and set up in Cremona the religious order, the Sisters Adorers of the Blessed Sacrament.

Guglielmo Tarcisio Paluschi, 24, a seminarian in his fourth year of studies said St. Spinelli was “a great example for the priesthood.”

“He understood the heart of Christian life is the Eucharist, where a Christian finds the strength to go out and bring to others what he has received,” he said.

Paluschi said their group had a private audience Oct. 13 with Pope Francis, who urged them to try to make the Gospel understandable to young people because they are receptive.

“He did it,” Paluschi said pointing to St. Spinelli’s banner on the basilica’s facade. “During his era, he found a way to make others understand Christ lives in each person” and is present in the Eucharist.

When asked what attracted him to pursue the priesthood, he said he has met many good priests who have “shown it is possible to be happy, to find happiness in the priesthood.”

Reflecting on his life, he said he sees Jesus “is calling everyone to a vocation of happiness and, in happiness, people can become a saint. If you look at your life, you can see lots of people leaving you ‘seeds’ that grow, and if you keep following, they lead to holiness,” he said.

“He succeeded,” he said, looking again to the banner, “He became a saint.”

PREVIOUS: Saints risk all for love of Jesus, pope says at canonization Mass