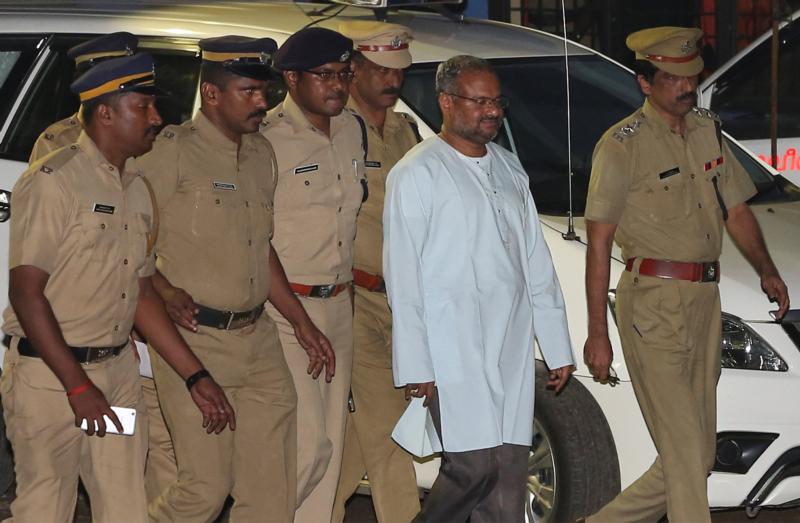 Bishop Franco Mulakkal of Jalandhar, India, is led away for questioning by police Sept. 21 on the outskirts of Cochin. (CNS photo/Sivaram V, Reuters)

COCHIN, India (CNS) — A court in India’s southern Kerala state granted bail to Bishop Franco Mulakkal, who was arrested almost a month earlier and charged with raping a Catholic nun.

The Kerala High Court granted bail Oct. 15 on condition that the bishop, based in northern Jalandhar City, should not enter Kerala state other than to report once a fortnight to investigating police, reported ucanews.com.

The prelate was also told to surrender his passport to the court to stop him from any attempt to leave the country.

His lawyer, Vijay Bhanu, told ucanews.com that securing bail was a “victory” for the bishop.

Bishop Mulakkal was arrested Sept. 21 after a 48-year-old member of the Missionaries of Jesus, a diocesan congregation under the prelate, complained that he raped her multiple times between 2014 and 2016 while he was visiting her convent in Kerala. The bishop denied the allegations.

On Sept. 24, the bishop was taken into judicial custody.

On Oct. 3, the state court rejected his bail application because of “reasonable evidence” against him and the fact that police were not yet to complete their investigation. The court found that bail might allow him to attempt to influence witnesses.

The arrest of the bishop came after dramatic scenes in Kerala that included a street protest attended by five nuns from the victim’s convent, who demanded the bishop’s arrest.

The bail condition that he not to enter Kerala unless he was reporting to police was important, said a nun who supported the public protest, which ended soon after the arrest took place. The Kerala native bishop could otherwise have easily influenced religious and political leaders in his favor in relation to the investigation, the nun said.

The bishop was told he had to leave Kerala within a day of being freed on bail.

“But where will he stay is the biggest question,” said a priest associated with the case, noting that the Vatican had not dropped his “title as the bishop of Jalandhar” despite removing him from administration of the diocese days before his arrest.

There was concern as to whether the bishop would go back to Jalandhar, the priest told ucanews.com on condition that he not be named.

The Indian bishops’ conference secretary general, Auxiliary Bishop Theodore Mascarenhas of Ranchi, said appropriate authorities would decide on where he will stay and “what will he do.”

“We will cross that bridge when we come to it,” he told ucanews.com without elaborating on when a decision would be made.

PREVIOUS: Superiors general see no reason why women shouldn’t have vote at synod

NEXT: Lack of progress fighting hunger is shameful, pope says