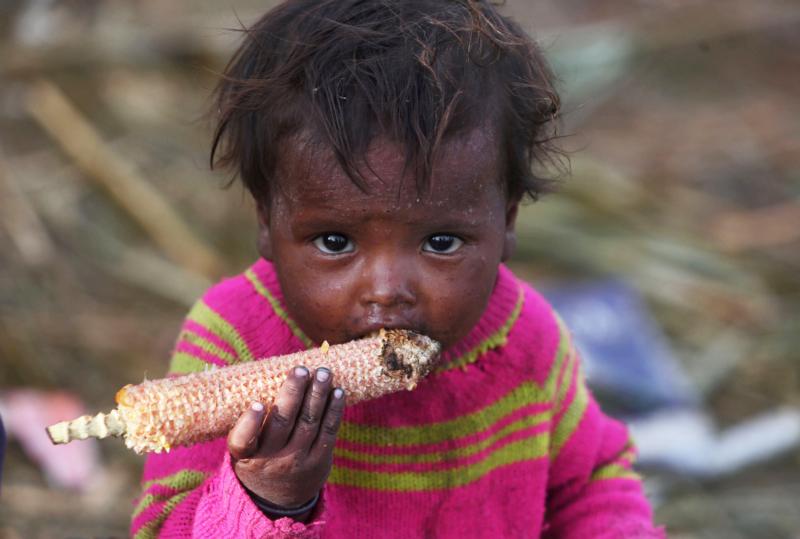 A child eats corn outside a makeshift shelter in 2015 in the Kashmir region of India. World Food Day is celebrated Oct. 16 to mark the date in 1945 the U.N. Food and Agriculture Organization was founded. (CNS photo/Farooq Khan, EPA)

ROME (CNS) — At a time of technological and scientific progress, “we ought to feel shame” for not having advanced in “humanity and solidarity” enough to feed the world’s poor, Pope Francis said.

“Neither can we console ourselves simply for having faced emergencies and desperate situations of those most in need. We are all called to go further. We can and we must do better for the helpless,” the pope said in a message to world leaders attending a meeting of the U.N. Food and Agriculture Organization in Rome.

The World Food Day ceremony Oct. 16 marks the date the organization was founded in 1945 to address the causes of world hunger.

The theme for 2018 is “Our actions are our future: A zero hunger world by 2030 is possible.” The 2030 agenda seeks to end hunger, achieve food security and improved nutrition, and promote sustainable agriculture.

Local programs are just as important as global commitments to ending hunger, Pope Francis said in his message.

“Global indicators are of no use if our commitment does not correspond to reality on the ground,” the pope said. “This must be done in the context of suitable institutional, social and economic support that offers fruitful initiatives and solutions so that the poor do not feel overlooked again.”

According to the FAO 2018 State of Food Security and Nutrition in the World report, world hunger is on the rise again, and over 820 million people are suffering chronic undernourishment.

The pope called for policies of cooperation for development that are oriented toward meeting the real needs of the people: “The struggle against hunger urgently demands generous financing, the abolition of trade barriers and, above all, greater resilience in the face of climate change, economic crises and warfare,” he said.

While one can dream of a future without hunger, the pope said it is only reasonable to do so “when we engage in tangible processes, vital relations, effective plans and real commitments.”

The poor expect real help from world leaders, he wrote, “not mere propositions or agreements.”

However, it not only requires political decision-making and effective planning, but also a more proactive and sustainable long-term vision from world leaders, Pope Francis said.

“We overlook the structural aspects that shroud the tragedy of hunger: extreme inequality, poor distribution of the world’s resources, consequences of climate change and the interminable and bloody conflicts which ravage many regions,” he said.

“Some may say that we still have 12 years ahead in which to carry this out” to meet the 2030 goal, the pope acknowledged. But “the poor cannot wait. Their devastating circumstances do not allow this.”

NEXT: Synod groups focus on need for qualified accompaniment